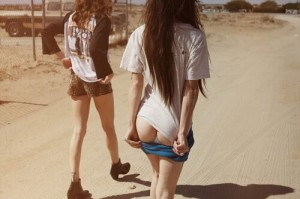 The seduction, a human science

The human sciences, just like all the sciences, try to define general laws according to variables. The only problem is that, in our case, the variables are much more numerous than in the other disciplines and most are difficult to quantify or even to collect.

It is thus the inverse approach which was chosen in evolutionary psychology : Instead of trying to list all the variables, the researcher considers those whom he knows and declares to do as if all the others were invariable. It is the sense of the expression “other things being equal” that is used and implied frequently always and everywhere on this blog.

For example, when we say that being tall and having big muscles offer a reproductive advantage, we imply “other things being equal”. In the real life, the advantage will not necessarily be very obvious. First of all, it is possible that the carrier of this genetic code never dares to approach a girl or is impotent, what does not question the principle of the advantage but its realization for the guy. Then, it is possible that this genetic code has other consequences going against the reproduction of its carrier : for example if the girl is traumatized for a reason or another and is afraid of big people (don’t laugh, I know some). In this case, it is naturally no more an advantage: the principle is questioned.

The expression “other things being equal” which is always implied in seduction thus shows the limits of the knowledge and reminds the caution which it is necessary to keep concerning their interpretation.

All our senses and all our observations demonstrate us daily that men and women are extremely different. The most visible differences are found in the physical appearance : the primary and secondary sexual characters.

The intellectual differences are also obvious when we use the appropriate tests. For examples, the women have a verbal intelligence very superior to the one of the men : They will understand better the various senses of a sentence. They speak more and not with the same objectives: it is true in all the societies which were studied (universality of the influence of the genes). The feminine intuition allows her to understand better the relations between people, she will know very quickly who tries to seduce who, what is the emotional state of a couple, while the man will be strictly incapable of it most of the time. In contrast, the men are more capable in visuo-spatial intelligence: they dominate completely in the tests asking to reconstruct an image or in reading a road map.

It is necessary to understand, on the other hand, that these differences are not absolute. It is easy to find counter examples : Many women are taller than many men, even if ON AVERAGE, the women are smaller than the men. These differences correspond to a “archetype”, it is only about orientations. We are all situated somewhere on the scale going from pure “man” to pure “woman” but not to the extremities. For example, I think of having a “feminine” sensibility (without being homosexual) as regards the feminine psychology, what makes that I understand maybe better the women and more easily than the other men.

The reasoning to be held in seduction is much more subtle and complex than “to seduce THIS woman you have to do such thing and not such other thing no matter who you are and who you are dealing with” (what a nonsense) : it is about optimizations and about supposed predefined roles.

We ALL are governed by our genetic programming

We will thus work on what I call “the average girl”, the statistical girl. Of course, it is necessary to understand also that every person is different and can react differently (because of the expectations, the character of the subject, the education, the experience of life, the faiths, etc.)

However, the current studies show that the average figures for every behavior, expressed in percentage of the variance are, 50 % for the genetics, 40 % for the peers, and 10 % for the parental influence.

Every individual is thus determined at 50 % by his genes. It is true for the intelligence, his happiness, resistance in the diseases, stress, social success, etc. It seems more and more that the genes (and the prenatal life) define a maximum what will be reached unless the environment prevents it. In other words, the education and the fates of the life can destroy a potential, restrict it or on the contrary allowing to exploit it, possibly directing it but not developing it, and it is true in terms of sports, intellectual capacities, etc.

It is sad and amoral but it is TRUE. And it implies as consequence that what seduces every “pure model” woman is determined by her genetics. The game thus applied to understand it and used the evolutionary psychology to activate the levers which make the women “programmed” as women react.

If you want “to understand the women”, I recommend you to read works or blogs about evopsy because it is the basis of everything, in seduction.

I hope that you better understood why the seduction is a domain so delicate, and why the game works thanks to the logic of large numbers.