A platonically sexual relation with a Parisian 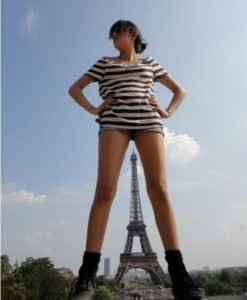 What’s up ? First of all, I try to fuck an American girl. I talked to her in a club, good vibe, and she suddenly disappeared. Fortunately, I had enough time to take her Facebook. So, I contacted her on FB, we met and we drank three or four drink of Muscat. Then, we flirted with our words, our eye contacts and as a consequence our body temperatures increased uncontrollably. It ended letting off steam by dancing very closed together in the nearest club.

So here we were, I didn’t keep my hand for myself and she neither <3 but I felt she didn’t want to kiss on the dancefloor. I totally trust my social intuition, so, I tried anything else : I isolated her and… It worked : kissclose ! We met two or three times since that night but it’s every time the same scenario : she avoids my lips then kisses me at the end of the night before disappearing when sexual tension become out of control (for example when we touch each other sex though our pants). I asked her why : she told me that, in her culture, when you are well-educated, you do not « display any public attention » … so, if I want to give her any pleasure, I will have to invite her to « watch a movie » at my place, and « game, set and match »… But I’m not in the right mood : she has a sexy accent, she is cute, but I’m too old to invent excuses for my desires. What a shame ! I know it is the game of seduction, but I won’t do too much efforts for frustrated a girl who cannot assume her responsibilities !!!!!

I was interested in what she said about « not displaying public attention »  so I asked her to tell me a little bit more about that : In her country, when you’re in a relationship, you can kiss your girl in public, but when you’re not, this is not seen as honourable. But, from the outside, how can people know if the girl you’re kissing is your girlfriend or a total stranger ? I mean, they only seen a boy and a girl closed together. I think it’s a bad thing that the girls have this kind of shit in their mind… I really hope the mindsets will change in USA so I will can sleep with hot blondes full of silicone more easily. It’s a job for Obama.

Also, Arnaud introduced me to an Asian girl. I saw her in a Park, we kissed, then the night fell and they closed the gate. I almost cut a ball when I strode over the fence. Moreover, I was wearing a suit pant : it is broken…  since that funny night, we send each other hot text messages, so it worth it. I will try to do not screw it up, hoping she won’t neither !

Thirdly : The girl from Adopteunmec didn’t give a lot a news even if she let her ring at my place (I guess it means she wanna come back – if she tries to mark her territory it would be better to piss in a corner – or she really forgot it and finally doesn’t want to see me again). Otherwise, I yet already saw the girl of the streetfucking again two or three times, we are sex-friends. Well, I had not too many doubts about her, because between us it is fusional : I fucked her in the stairs of her apartment and on the floor of the hall of my place (we buried the  condom in a plant)… it necessarily creates links!

Last weekend, I went to Paris for the wedding of a cousin. I talked about sex with my uncle : a womanizer who went into a lot of gangbangs ! I also had a crush on a brunette (an actress not very famous at the moment) her name is Zoé. I have to say, it was full of people from the high society : lawyers, traders in any kinds, big bosses… I however looked forward to enjoy the rest of my week in Paris.

Indeed, since a few years, I maintain a platonically sexual relation with a Parisian of 25 years I met in St-Tropez when I had been a beach manager! She has nice boobs, green eyed and plays volleyball quite well. It’s cool ! She added me on Facebook and we did a naughty Skype but… we didn’t see each « in real life » for at least three years ! When I told her I came to the capital : she told me that she would be there so I thought that our two bodies could finally get to know each other better, but… problem : she agreed on the principle but yesterday she started her bullshits « I won’t have sex with you so easily, you will fuck me and never call me back, you do not respect me, I would prefer that we remain a fantasy for each other, etc. » so I answered « OK, I’m in Paris for 5 days, so we can see each other and have a good time or we can do something else and both be frustrated but in any case I won’t arg for hours on this subject … tell me tomorrow what you decided » (you sometimes have to be ready to lose a girl in order to have sex with her). I guess she was just anxious. This morning, she sent « my body decided for me, I have my periods ». I told her she directly entered the top 10 of the worst excuses in the world (it’s not very original) ! Then, after having told her that she was disappointing, I stopped answering. She really pissed me off : girls who tell you during years than they will have sex with you and who do not keep their words when the time comes only deserve my contempt!

Finally, she sent me a lot a of text messages I read when I was in a Nespresso shop saying « What else » to the sellers (not very original but I have the right because I am a tourist). I didn’t answered her, but she changed her mind on her own. The last message said « I want you ». Probably a spark of intelligence… So we finally met at the Opera : we went to the FNAC, she asked « what do you wanna do ? » I was honest « I want to go to your place and have sex with you, you were talking about respect earlier but, to me,  respect is not lying to you.
– We can go to the cinema if you want.
– Nope, your place. » So, we took a scary subway and arrived in the bad districts (full of riffraff and tall blacks) ! What a change with the girls from the Georges Clooney’s shop who made me think they were probably hired for their hot bodies and their faculty to keep their nails clean while cleaning cups.

At her place, she started a movie we watched almost 10 minutes (500 Days of Summer)… then we had sex twice in her shower (by the way, she really had her periods) even if she said just before « I will never sleep with you ». It was good. So, in conclusion, when a girl spontaneously says you she won’t suck you dick, you know she will. You just have to be sexually aggressive enough in order to help her to overcome her last minute resistance.

It is the theory, but in most cases, I don’t do that. I hate microcalibrating. What I like is honesty and franchise… so sometimes I put them in front of her responsibilities: I say « very well, we won’t have sex together » and I start leaving the place. It works most of the time : they change their mood. Each to his own, there is not ONE ONLY way to seduce or to have sex. You can even sometimes fuck a girl only because you’re lucky or because she wants you more than you want her ! If she had told me « no », that we didn’t see each other : I would have masturbated and put it in perspective.

The bottom line is : girls want sex, want orgasms. They know they will feel good after. But, it is easier for them to stay in their comfort zone, to do not unzip your pant, to do not get naked in front of a stranger, etc. Some people really live their lives, most of people missed the best opportunities because they are afraid. For their own good, become a good lover, and give them a chance to have good time instead of staying bored at home.