Back for a new season of scandalous pick up in Aix 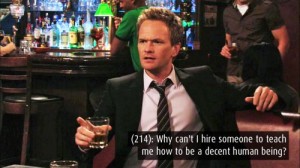 Hello ! Hope you’re fine ! Rested and relaxed after a few days in a mountain, I am back for a new season of scandalous pick up in Aix. Welcome in 2013.

Yesterday evening, it was an awesome night : I ate a burger in town with Marie (my open relationship), I fucked her of course and… when she left, I opened Facebook.

I chatted there with a girl almost as scandalous as me, who added me as a friend a few days before. Slight drawback, she is so full of herself that is not really credible : she claims she is “top of the range ” and that she deserves “only the best in her bed”. I founded it highly overrated that she dares to game me like that. She said “someone told me about you, you make me laugh a lot, so I’m half in your bed, your job is doing the rest”. I found it so beautiful that I almost blubbered. She also told me that she was at the moment in the bar in front of my house and put me in the challenge to come.

I just thought it was fate : I had a date with my Padawan (a friend from high school who has almost always been in a relationship but who broke up during the Christmas Holiday so he decided to learn the Game) so we went to this bas, in order to do not lose face. We had a few drinks, we looked for the scamp in question and when we had localized the target… Here is the exchange of messages :

There, our looks crossed and I raised my glass like to say “cheers”. I drank heavily a Get-Perrier. Then we went out to get some fresh air with Padawan.

We a little spoke with her buddy and she then we drank to their expenses at their table but someone spilled half-bottle of rosé on us. She said “look, me too I have some on my jean” and she took my hand to put it on her thigh. Red alert ! Well, after, we touched each other (she kissed me on the cheek to try to turn me on but I remained stoical like James Bond) then she went dancing on a chair like a delicious biatch and her buddy took advantage of it to whisper me “she doesn’t kiss at the first date!
– me neither”. Then I went to find her and I whispered to her “I don’t kiss at the first date!” she laught “me neither” (we are on the same wavelength).

I went to sit down again then she tried to turn on her buddy by rubbing herself to him. I began to put my jacket, she then ran up and asked me “are you jealous of my buddy, do you leave?
– No I was cold.” Then she sat down again next to me, began playing with ice cubes then put me three in the mouth before coming to take them with her tongue. Well, we kissed and everything then I suddenly received a text message. Because I had not put the number in my phone, I sent an elegant man “who are you ?
– Mélanie and you ? (another one who added me on FB at the beginning of the week)
– Barney Stinson.” We agreed to meet near the city hall to go in a club together.

Because I am one of these rare guys who can do two things at the same time, I danced at the same time with the girl of ice cubes. At a moment: she took my right hand, put it on her butt and told me “It is my trump card, my buttocks. (she probably likes doggy style)
– Would need that I see them without the jeans to confirm.” She violently pushed me on the seat and danced with one of my legs between her legs… She wriggled, came up and came down… Which means that, OK, she probably moves well in the bed too.

I missed the time of the appointment with Mélanie because of her, as a consequence I received “you are scandalous” by text message. Well, it motivated me to move. In any case, the player with the attractive legs wanted to leave in order to sleep and her buddy (nice head but become a little bit fat due to drinking) too. She gave me a kiss on the corner of the lips and I commented “what is this ?”On my way for the city center I received her address, it excited me but well… It seemed to me slightly too beautiful to be true and I had another plan, thus… A bird in the hand is worth two in the bush as said my mom.

Padawan returned home and I went in another bar with Mélanie this time (beautiful green eyes but less hot than the girl of the ice cubes) : we met Hafid and Arnaud there. The girl tied my hands to the stripper pole with her scarf so I bawled “set me free anyone, help” but no one cared. Selfish men’s World ! She then joined me on the podium and I said, in a provocative way, “when do you wanna make love ?
– when you want.” I kissed her and she stayed stunned… she probably didn’t think that I would dare in these conditions. Well,  I also talked with a guy who carried a blond wig but this bastard licked my cheek by surprise. True story.

We finally went in a club, I really wanted to have a pee. Then, I opened my shirt as well as my pants and I kissed Mélanie again : I danced with my butt against her, discreetly fiddling her pussy. I looked like an idiot but it was original and discreet. After, we went to my place, we drank a tea to purify ourselves and we fucked.

May the God of the Game be with you ! Kiss.