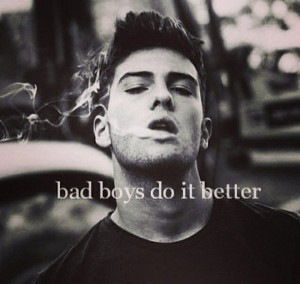 Soft or biting? Angel or devil? Boor or totally in love? Is it necessary to choose a fucking side?

There are guys out there for whom the ultimate strategy of seduction it is to compliment the girls, to never tease them, to never rush them, to be twice as careful and to be soft all the time with them. Needs to believe that they would like that that is this way that that they behave with them. In any case, it is on this kind of men that the girls stick the label “he is nice”.

They so think of becoming the “Prince charming”, the one every women say they want to get married with. Ahlala this is sooo romantic to act this way just to have sex… But having said that, I do not think that she realizes your honeyed efforts and I guess that she is rather going to lose her respect for you because your behavior has an air of phoniness.

Always let her decide on where to go out, never let her pay the slightest drink nor any restaurant and always call her the first one to be sure she is not sucking another one worryied to know that you still like her or if she had some salad between teeth during your last date. If you so much want to mark your territory, why not raising the leg and pissing above her downright?

I have a good joke for you: the hotties and normally constituted girls do not like doggies. At least not to have sex with. If you like metaphors, say to yourself that they prefer cats to dogs. More independent, wilder, more unpredictable… More selfish maybe…

Well I’m not saying that this category of men will never have sex, depending on who they meet. Some are lucky. What I say it is that it is not virile and that it pays “few” in term of “seduction” profitability. And also, I am not sure that by being a doormat like that, the relation that would follow would be blossoming for the man. Should you sacrifice yourself totally just because she has attractive tits ?

Category 2 : Those who are afraid of disturbing

There are also guys out there who know what is a behavior of AFC and who find it a little bit ridiculous but who nevertheless do not dare to be sexual… then they do nothing. They do not really have fun, they take on them and are often frustrated. They are almost transparent sometimes. It is hardly more profitable than the AFC attitude even if they achieve a little more often their goals and it is a little less ridiculous… but it is not awesome. Who said it is necessary to be hypocritical to be socially adapted?

The girls know that you want to screw them, and they even expect that from you, unless you are gay. Often, they do not understand why the guy who could please them takes no initiative and so they next… often for a jerk who will do it.

There are eventually those there who compliment very rarely even never the women, lie, are not very affectionate… We really have the impression that they don’t give a damn about their girl and that their relation is almost impersonal. It is what pays most and is the less a headache, but it is a little bit unhealthy

As a result, both kinds of aforementioned guys wonder “but why does she like HIM ? She would be happier with me, it is so obvious… is she stupid or what ?” And they are not completely wrong. It is not logical at all… hell no, it is emotional.

Why do these individuals have such an attraction power??? A study of Bradley’s University (Illinois) involving 35.000 people in 57 countries indicates us the three “not qualities” that make badboys so sexy in the eyes of women (whatever they say, it is statistical). They are :
– The narcissistic obsession;
– The impulsiveness, the ongoing search of strong sensations and a psychopathological behavior;
– A tendency for the deceit and the Machiavellian manipulation.

It is bad will say some… It is natural then let’s accept it and adapt ourselves if we are smart, I would answer.

The nice guys are desperately lambdas. They bore. There is no passion nor surprise with them. They are reassuring but not exciting. Badboys are rarer, they engender doubt and frustration. They are exciting but not reassuring. The thing is none of these two options (either Nice guy nor the jerk) can drive both partners to happiness or at least to a high level of self-fulfillment in their couple. The solution (for a woman) that would consist in having two lovers each belonging to a different category neither (because they could kill each other).

In life, you know it, nothing is white or black. Then I would suggest to the ones and to the others to steal one or two cards in the game of the other side. For example, the nice guys should act in a little more detached way and should stop granting so much importance to “what people say.” Indeed, if you want to negotiate something on leboncoin, you do not start by saying “what a beautiful thing I absolutely need it so can you lower the price?!” It is stupid. Well, it is the same thing with women. By sticking the women, by being needy and everything, you make so that they do not any more need to make any efforts to get you. That then interests them very fewer even not anymore. Don’t be so submitted, transparent nor reconciling. Contradict her, tease her, annoy her… she will like it in fact, even if she says no. Do not mistaken, it is not a question of becoming cold nor elusive, but of being more frank and of stopping thinking in term of “There is an attractive girl here in this party so I absolutely have to behave well, to show that I am a nice boy, to keep a potential chance later, etc.” Live a little more in your reality, in the contact with your instincts, rather than in the frame imposed by the society (which is not really made for your personal good).

If you are a badboy, swear a little less, go from time to time as far as being soft with her, make efforts in society. Feed some nice guy sides but do not euthanize your sexy qualities. Also adapt yourself to the context and to whom you have in front of you because know that even if you turn on certain women, you represent an emotional danger thus you also frighten them. Try to be a little more reassuring, a little less imperceptible. But too many good manners, diplomacy, it is a pain in the ass, I agree with you. Mix all the same a little water with your wine (I have sometimes difficulties to do so because we become used to don’t give a shit about all those people).

Avoid these caricatures that are most of the guys whom I meet and try to be the REAL yourself. The one who is sexual. The one who does not fool himself. The one who does not specially try to please people he doesn’t give a damn about. In other words, do not try to be a gentleman, rather try to be a man. Stop thinking how to not shock nor disturb anybody because so you would seduce few. Do what makes you have fun. Give way. Stand out. You will meet more people like you. And if the others are not happy, too bad for them, Earth is fortunately very populated. Moreover, these “other” moralizers in large numbers… Are they models? Are they happier? Do they fuck more and better?

Yeah, courage is required to argue like that but it is also what makes the charm and the strength of this lifestyle.

NB : Pay all the same attention on being “normal” at work if you have a serious job and respect the laws. The purpose is to do well out of it not to become a marginal.