Be careful not to go out with emotional abysses 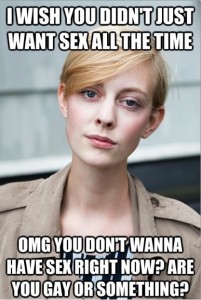 I have a question : « If a woman does not love herself, how can she love you one day? »

We need affection, but we cannot let whoever give it to us. Some « emotional abysses» exist. Most of the problems met by men during their relations could be resolved if they did not try to obtain affection from women who are not for them. These girls, emotionally ravaged or unstable by nature, cannot give you the type of affection you need.

PS = The reason why they are unstable, we don’t give a damn. You are not her shrink.
PS 2 = Don’t be this kind of man who comes to love a girl just because she does not like him. It is unhealthy.

This kind of women can be difficult to keep, but at least if one day she loves you, she will really love you. They thus represent a « constructive » challenge. She is worth it.

Monsters in the male

Creating dramas reveals a lack of respect for you and is also the sign that the girl in question has not much self-esteem. But, it is sad to say that but some guys like supporting fits of jealousy, scandals and madwomen …

Fuck ! Do not waste your time giving advice to these poor guys. They encourage the bullshit of these girls. I am sure that they do not even want to be helped, in fact. They feel good in their poverty. They don’t want to be really happy… FUCK THEM !

On the other hand, a quality woman who loves you, it is hard to find. A woman who would not put you under pressure, and whose  internal clock would neither be late nor anything, etc.

The women adventuresses, and who do not generally put you under stress, are awesome. Unfortunately, certain guys interpret their lack of investment in the relation as a challenge and try too much to possess her then put her under a big pressure… and eventually lose her.

I had a very strong sexual connection with dozens of women, like that, just for fun. But I was honest enough to admit that the type of affection I looked for : they could not give it to me.

You can obtain affection from an « emotional abyss », but you will never have THE type of affection you look for, the one you really need. Yet, even if the sexual complicity is powerful, the affection is what welds the couples.

Something else: you cannot change a girl. The boring women will remain boring. It is rare that they agree to question themselves for a guy… and then even if she wanted that would need a lot of efforts to develop her personality in the right direction. She’s a total pain in the ass. What you see the bad days is thus probably what you will daily enjoy, eventually.

He doesn’t give a damn of you

The good boy who appreciates them sincerely is necessarily a loser in their eyes whereas the guy who treats them like shit is attractive. INDEED, HE UNDERSTOOD EVERYTHING! Pff. The feminine logic, it is really something… !

PS 3 = I even met poor girls who downright admitted being attracted by the mediocrity (diverse reasons can lead to that, it depends on the story of each woman but in any case, it makes us think…)