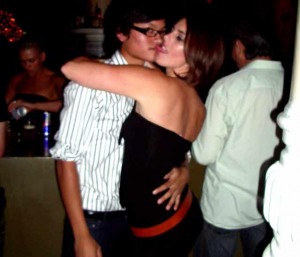 This article has been written by Virginie.

It’s me again… again ! Admit that you missed me. You can’t deny, I study psychology thus I know better than you what you think. Mouah ah ah ! Hum hum, well well…

In a previous article, Fabrice talked about the influence of beliefs on the behavior, how they can be limiting or, on the contrary, source of opening. And he is right. But there is something else. Let’s take an example: a smoker knows (he has the belief) that smoking is bad for his health. However, his behavior stay the same, he smokes. What tends to show that this reasoning has its limits. It is also valid in various other domains: sport, food, work,… and gender relations, of course !

In fact, what takes place most of the time is the opposite: our behavior influences our thoughts. Simply put, we deduce information on ourselves from the way we acted – or from the feedback we had from the others on our behavior. This is the way a teacher who tells to a pupil that he is bad/will never have his degree/has no future/etc. is going “to condition” him to continue in this way: the pupil interiorizes the judgment of the teacher on his behavior (for example, the result to a test) and will think then, that actually, he is bad/will never have his degree/has no future. Then : early school leaving, deal of drug in front of the high school followed by bad-trips, a murder committed under LCD and a life spent in jail (well, OK, I slightly exaggerated but, needs to understand me, I lived not far from Marseille). Well, then there are also those there who are going to want to prove to the teacher that he is wrong, will work hard, will have a high school diploma, go to the ENA(NATIONAL ADMINISTRATION SCHOOL), become a CEO of a big four quoted in stock exchange and finish their life on a paradisiac island (that they will have bought) surrounded with riders. Well, that is not the point.

Another example, closer to the subject of this blog: a guy tries an approach on a young lady. He is rejected/ignored/insulted like the 3 649 previous times. As a result, is created in his mind an association between “way of approaching” and “self-esteem”. Thus, every time he will try to pick up, this poor small chap will remember his previous fruitless attempts and will have a loser mind. That reminds you something? (As for myself, I hope so, so that I’m not writing this article for nothing – if not, good for you but what are you doing here then?!).

Naturally, the influence of the behavior on thoughts also works when in a positive way. The parents very well understood it: by congratulating their child after he tidied up his room/hung the washing up/ emptied the dishwasher /empty the garbage/etc. by saying that he is helpful/thoughtful/autonomous /etc. It will incite the child has to act more often in this way in the future. Yes, it is a kind of conditioning. But, anyway, the society tries to condition us thus it is better if we are for something useful.

In the same way, when you find a routine that work, you feel powerful. And, naturally, you will associate this routine with your success and with the image you have of yourself. So, every time you will use it, your successful past will come back in your mind and you will feel more confident. More confident, you will better communicate – on the verbal level as well as on the nonverbal level. And, statistically, you will increase your chances to succeed again. Admit that it is not bad, as virtuous circle!

In brief, after the theory, let’s practice. You certainly know that we judge from what is observable thus from behaviors. Moreover, studies showed that when we have to interpret the behavior of somebody else, we tend has to explain it by internal factors (“he is like that, it is in his nature “, ie, his personality), by putting aside the external factors (the environment, the situation, etc.) While when we have to explain our own behavior, we more take into account external factors. Of course, all this depends on the kind of behavior (positive or negative), on our relation with the other one (friend or enemy?), etc. All this to say that you fully agree with me to say that an individual is not a sum of behavior. And that a same behavior can be the object of multiple more or less right interpretations among which only the author of the aforementioned behavior can be the “most true”.

Thus, when a girl tells you that you are just “a knackered big person, a pervert, a sex maniac” because you dared to approach her, it is your behavior she judges. Not YOU. Then why granting so much importance, why being affected by this judgment? We have just agreed on the fact that an individual is not a sum of behavior and, besides, that we tend to minimize the part of the environment when we judge somebody else. Learn to get loose from hasty judgments like that, understand, please, that it is not you and your personality that are questioned but your way of behaving. Take a step back. Then, you should not fall in the inverse excess which would consist in considering as null and void any judgment of your behavior coming from somebody else than you. It is not because you find your routine really too classy that everybody has to think like you – or you should create a dictatorship or a sect. Then, anyway, the purpose is not to please everybody, that would mean pleasing whoever. And admit that you do not want that your future girlfriend is whoever. In summary, do not too much take to heart remarks you could hear but question them. If they are justified, work on it to make adjustment. If it is unfounded, move on.

An exercise that could be interesting would be to train to approach a friend (a girl). So, she could tell you what she likes, the embarrassment, what puts her ill-at-ease, etc. Of course, all the girls do not react in the same way and what your friend appreciates can be different from what will seduce your future target. But having a feminine opinion is, I think, always good to take. Of course, it is better to ask to a girl you know well, so that her opinion is as frank as possible. Or then, call a gay buddy.

I hope that this article will have pleased you and will help you in your fight against the stronger sex.