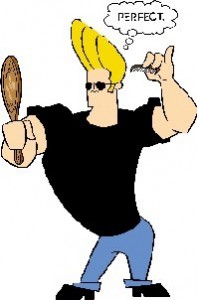 What is the image that one has of the “seducer” (in the collective unconscious)?

First of all, I would say that being comfortable in the company of women, being well in our sneakers, this is not necessarily a seducer’s cliché. It’s just that being relax tends to put others at ease. So we have more success : in discomfort, it is difficult to seduce.

The real problem is when these qualities are simulated or overplayed. In this case, it is reasonable to assume that they are not authentic. Playing a seducer’s caricature, that’s what is ridiculous! It’s a bit pathetic, in fact. For example, despite all the beautiful girls I’ve slept with, I am not “over-confident.” Most of the time, even the super-hot chicks are not hyper-confident, by the way. It’s like that. On the other hand, with the Game, I accepted my weaknesses (and my qualities) and I’m pretty good about myself. For example, at a time after I was assaulted I had anxiety attacks and I had trouble getting out of my house. Going back on the NPU field is a victory for me!

Remember: A man or woman who accentuates to excess certain qualities (or weaknesses too), definitely try to mask his or her vulnerabilities, sufferings and doubts. We all have some, but those who usually hide have much more than those who show and assume them.

Personally, I’m pretty lambda and it suits me very well. Because we have absolutely no need to play the womanizer to seduce women. My advice: do not fall into the cliché! Just be more serene with the girls and dare more than the average of other guys.

I feel like I’ll break a lot of myths but, for example, when I see a guy who plays the mysterious guy, I say that there is probably not much behind it (sorry but it is often the case). A guy who plays it too much H2G, I think he’s scared to conclude with chicks (inexperience, fear of women). This is not because a man is surrounded by many women that he is a big fucker, maybe he is a professional friendzoned. Besides, I’m not THAT surrounded by women, I have my circle, but often I do not become really friend or close with chicks I’ve fucked. Too bad, indeed, but well. It’s life ! Finally, it is not because a guy is very very muscled or handsome that he fucks a lot. My first padawan was at least HB9 yet he had difficulties. The physical appearance is not everything, even if it helps. This is thought the attitude that we can tell if a guy is a seducer or not. A guy who does not approach but claims that chicks fall on his cock by magic, personally, I don’t buy it. I know women too well to be fooled at this point. Or maybe it is just the case of 0.01% of the handsome guys. In any cases, it is because the physical is mixed with other qualities (power, money, social status …)

It is not written on my forehead that I fucked with a lot of women. I know guys who brag, who dress with very expensive clothes and everything, adopting a hyper assured body language but yet who have not touched girl for years (they compensate the blank). The girls I meet in bars cannot guess that, with only one finger, I would make them orgasm more than their last 10 guys together.

On the other hand, it’s written on my blog: it turns on some, it blocks some. Some are turned on but want to piss me off for the principle “I am not like the others, you will not have me so easily, I’m not like that, etc.” (between the last minute resistance and the shit-test, etc.) Sometimes I fucked them anyway (they just wanted to play), sometimes not (it scared them to fuck with me they probably think that I ‘had STDs or they were afraid that I compare them with other hotties – when I told you they do not have much confidence in them despite what some claim -? pff, couldn’t they just enjoy ?)

What makes me laugh is when I fuck a girl in NPU and then I add her on FB. She thus becomes aware of the existence of my blog and my life as a PUA. Reactions: some have never spoken to me again after because of that. They are people who like it. Even some have introduced me to their girlfriends. Yet, I’m the same. Also some invented me a life “yeah you make the apology of rape, etc.” Uh, really? Where ? There’s no more considerate, kind and respectful than me. She has not read anything the girl, but hey, she bullshits me.

In most cases, the chicks react badly when they face my blog. Why ? Because thinking for themselves, it is difficult. So just because I assume to be a little kinky, chicks associate me certain characteristics which we have spoken about above (jerk, arrogant, macho). Let’s get to the point: I’m not really an asshole, I’m rather a teasing dude. I guess I am someone simple, accessible. And I am honest unlike most guys. What often surprises the women who investigate further, it is that behind my facade of “serial-Fucker”, they discover a hyper-sensitivity. I’m not a robot, I don’t practice impersonal fucking.

Conversely, there’s the “politically correct” clichés. Often from guys who are pissing off women because enclosing them in a wise and prude image. Their idea: The Seducer is gallant, romantic, polite, elegant, refined, respectful … There are guys, let’s call them “theorists of respect” who want to give a hyper-friendly guy image of the woman and all. .. and who will criticize fuckers like me … all that for what? To fuck the chicks. In a word, they think they embody the ideal of the lover in all its perfection. An ideal that the Hexagon’s women tend to question, either. Those guys don’t fuck but don’t understand why, they’re so frustrated.

Respect, it is a matter of context. This is not at the time you take her doggy style that you respect her to excess. It’s a question of timing! In addition, they love it in general (with a spanking), so if you do not doggy style them because you respect them too much, it is in fact a lack of respect.

I prefer a woman who knows how to have fuck than a woman who is blocked and calls me a big pervert when I say a raw word. The normal chicks (not the extremist feminist nor the lesbians hating guys), it’s the same. Open your eyes ! Sorry to break one more myth. But if you want to fuck more, be less tight-ass. It was the final punchline.

Finally, keep in mind that there are several definitions of the concept of seducer. They are people who are happy with kissing chicks only (me that piss me off when there’s nothing behind), others are like by girls but don’t touch them (I prefer be liked by a minority and fuck a lot than being liked by majority but not touching much), and then there’s those like me who believe that fucking hotties (not priced) is the only truly reliable test to see if we have a good Game. There’s probably other categories of seducers.