Big up to Barney’s Naked Man 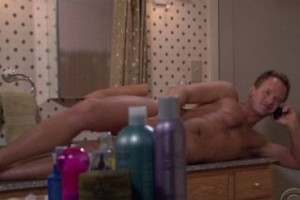 I did not make a joke on April 1 this year. Not in the mood. No humor. Sorry.

Primo (yeah I am big-headed I speak Latin), I’m a bit pissed off there because I approached a small English Erasmus and I came up against a wall made in bad faith and broom in the ass.

The girl warmed me on Tinder for almost a week and then asked me “I’ll see you tonight?
– OK at what time and where ?” Guess what, that very night, silence … Accustomed to this kind of situation I zapped her telling myself she just freaked out like so many others before her. But three days later she contacted me and began to flirt again. She asked my FB … but then again no answer. I a little pressured her and she ended by admitting the reason of this sudden silence: she did not read but I am necessarily a motherfucker because I write about seduction ! Long live to myths and stereotypes ! Well, I negotiated the thing and we started afresh. She flirted for a few more days and then suddenly, while it became concrete again (we talked about a real date) she planted a knife in my back “stop harassing me”and blocked me. The word is strong anyway! “Harass!” For my part I consider that harassment is to insist when the girl said no. Insisting when she continues to flirt with me seems normal to me, on the contrary. My mistake here was to give her a second chance after her first flake. Apparently when you’re a fearful person, it’s for your whole life !!! I often see girls who are hot theoretically (normal) but who as soon as it becomes concrete succumb to their anxiety because it is easier and do not live an extraordinary thing (they watch TV instead) then they rationalize no matter how and often by blaming me! But I continue to stretch out my hand because some are recoverable (I do not take myself for a hero far from that it is just my point of view and my experience).

Deuxio (secondly), I saw a friend who helped me during my depression. I know this girl since high school but I had never seen her as a sexual girl. Why ? First of all, because I’ve known her at a time when she dressed like a bag (sorry) and had a little girl hair… so not very very sexy. Then she was the girlfriend of one of my friends … so ethically untouchable.

In the meantime, the friend in question has cheated on her many times during an Erasmus in Scotland, and she said still being in love blah. The usual emotional ride of a girl victim of the idea she has about love. It does not seem to me that she had another lover since him (1 year by the way) or she has not told me in any case (with chicks, everything is possible). In short, she said that sex was not interesting because she was still in love with him (easy excuse for not having to go out of her comfort zone). I told her to fuck a dude to turn the page.

Because she helped me overcome my depression and I now have thunder erections, I decided to play with her adrenaline rate a bit. I was determined to make her feel emotions. I invited her to eat with me, nothing crazy until there, we sometimes do so. Except that when she arrived, I told her “sorry I have not taken a shower yet take the computer while waiting for me there (on the bed) during two minutes.” I do not think it surprised her because I am a guy always like that. When I’m on time it’s that I am wrong!

So I actually went to take a shower but I came out with the towel around the waist and without any clothes. I lay down next to her on the bed. After a moment she dared to ask “what are you doing?
– I am hard look at it (it was true that this situation excited me a little)”

I began to caress her arm and then her neck her legs with my fingertips … at first, she bugged: she did not move. I kissed her neck and then went back up to her mouth and she gave me her cheek. I smiled, we talked a little, her objections were always the same, “he’s an asshole but I’m still in love with him, I prefer tall men you’re not really my type, etc.” I presented my views and told her it would strengthen our friendship (that’s right – it’s always better to me to have sex with my friends like that I won’t be jealous of the guys who bang her after me on the condition to do not become addicted to her IE to have other options). And then I’m maybe not her type, I can believe it : some find me cute, some average and some even ugly (which ones are right? probably all): It is her right. But I can in any case still offer a very good roll up!

In short, after many negotiations and a foot in the door (a kiss on the mouth), she let me lick her pussy. The strip was exquisite, I admit. I am accustomed to bang chicks without really knowing the after only a few hours or even minutes of discussions … I admit it’s not bad to desire for a while although it was moderate desire . It reminded me of my early Game when I was much more invested in my interactions. Sensations that were pleasant to find!

After oral sex, she implored to take her. It’s often like that! I did and then we ate. We went back to bed a little later in the afternoon and this time she sucked me and came really strongly. Amazing how chicks who look a bit tight-ass can reveal naughty in the privacy.

For me this adventure is similar to the “naked man” by master Barney Stinson. Well, big up and homage to him when he sodomized the goat in his bathroom (when he was not able to pick up a chick or transexual)!

Tertio, I saw Red pants again. We played a strip card game and I lost. I had to lick her until orgasm. Then we has sex into 3 or 4 positions. It made me happy to see her again. She is still very hot. The same evening she flooded with texts. I think when you fuck a girl in a good way you do not need to chase her after.

Quatro, with my shrink, we move on. That’s what I’m suffering from, according to him :

– Panic Attacks: sudden terror or intense discomfort arising out of circumstances involving a vital risk. It is manifested by symptoms such as: the fear of death – the fear of going crazy – fear of losing control of myself – feelings of unreality or depersonalization – the feeling/sensations of fainting – dizziness – palpitations – tremors, muscle twitching – throttling sensations – tinnitus – sweating – a white veil before the eyes – chills or hot flashes. At least 2% of the general population suffers from this disorder.

– Agoraphobia : anxiety of being in places or situations from which escaping might be difficult (or embarrassing) or in which escape may not be easy in case of panic attack. Situations characteristics: being alone outside; being in a crowd or a queue; on a bridge or in a subway. These situations are either avoided or endured with marked distress or well with the fear of having a panic attack or requiring the presence of a companion. Personally, it’s more into “queues”.

– Generalized Anxiety : chronic anxiety manifested by continuous and excessive worry in all basic activities of life. Daily (work, family, health, finance, etc.) is the source of intense torment and of constant tensions, anxieties insurmountable. The anxious person feels constantly overwhelmed by events. She imagines disaster scenarios that could occur to her or her relatives. Widespread anxiety often goes hand in hand with intolerance of uncertainty, emotionality, irritability, constant need to do well and be reassured. The most common symptoms experienced are fatigue (sometimes exhaustion), difficulty to concentrate, muscle tension, headaches, migraines, sleeping problems or digestion … At least 10% of the general population suffer from this disorder.

– State of post-traumatic stress: the subject was exposed to a traumatic event in which both of the following were present: 1) the person was confronted with an event during which his physical integrity or that of others could be threatened 2) the reaction of the subject to the event has involved intense fear, helplessness or horror. This disorder is a response to a situation of threatening incuding an exceptionally stressful event.

Another thing: the kind of shitty psychoanalyst I had seen before was implying that I was happy to be unhappy and I was happy to be in this situation (it’s easy to say this and makes people feel really guilty… we really wonder why we pay these people who are like graduated assholes). And besides, he said that I was unconsciously provoking my panic attacks to draw the attention of my mother and not having to go to work now that I graduated. What a bunch of crap! So I started looking for a job in Lyon or Paris (with a preference for Lyon : because city less stressful I think). And I have much less panic attacks and they are less powerful, I can handle them through breathing.

Quinto, I know that these last two adventures I have told are not really Internet-related (except that the first was booked on the net and there with my friend we talked a lot on FB ) but hey they are so exceptional that I was urged to tell them (too afraid of not living long enough to share it with you). Then for the telling of the story, in general, they are important nonetheless. Finally all that to tell you a thing I remembered recently, on day, my grandfather told me how he met my grandmother. He had a colleague at work and close friend who got married and he told him “I also want to get married now” … then the friend replied that his wife had a friend in a village of Ardèche who wanted to get married too. He gave her address and they began to write. Then they met up and it worked. What I mean by that is that it’s pretty close to contemporary Internet Dating and this is perhaps why I love it so much! I met my little Virginie on Adopt and we are very happy. In addition it is the only one I fuck without condoms! It is a very intimate and special relationship.

Finally, here we are, I spoke again about my grandfather: I really have let him go, otherwise I should not wonder why I have death in me.