She blindfolded me and tied my hands 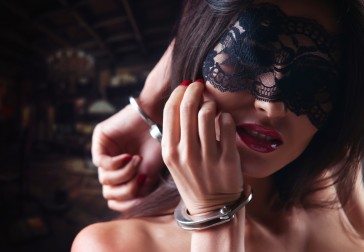 Yesterday, Tuesday 20th, I was very very upset… and anxious because I FUCKING broke one of my tooth during the night from Monday to Tuesday. I fortunately had an appointment with a dentist last night at 8pm, I was panicked when I arrived. It works fast in my hypochondriac brain, I imagined myself having a self-defeating toothache and they were all going to fall or something like that. But finally, no, it’s “just” stress: I squeeze my jaw too hard during my sleep and there’s one that ended up breaking. Apparently, it happens to a lot of people… so I’m a little reassured.

So, yesterday afternoon, I was upset and my boss did not help me feel better. The secretary was in training so he told me to go to the reception, that kind of bastard. Then, around 5 pm, the drop of sperm that caused the overflow of the condom is that he asked me to redo the envelope of a mail (I did not understand why he did not like my envelope) and that I replied “no, we do not care.” He made an incredible face and redoed it himself, his fucking envelope. He writes really bad, it looks like fly paws… then the visual package was TOTALLY disgusting after. But he is stubborn and maniacal, he likes to play the cock of low stock, so he’s always right (we all know a guy like this one). He mumbled “that’s not an answer, it’s the image of the cabinet that’s at stake.” My ass, yeah! It came so much from the heart that it was too beautiful: “I DON’T GIVE A SHIT ABOUT THE IMAGE OF YOUR SHITTY CABINET !!! “

Anyway, let’s talk about pick-up. I had a date planned, last night, with a little sex-bomb, a researcher, right after the dentist. But this flaker canceled around 8pm while still proposing to see her on Thursday instead because “they found something” and she told me she suddenly had to work until 10pm… I am perplexed ! What is certain is that she could have found my dick, if she had come, this researcher. Especially as she had apparently gone to the beautician to get epilated just for me! But the problem is that I had already planned to see my beloved cardiologist Thursday night…

In fact, I also had to see a chick tonight (Wednesday 21), a kind of Italian/Corsican. But she told me she could not finally come tonight, that she could only last night (Tuesday) because one of her friends makes a road trip and will visit her from today…

Do you see me coming?

I shifted the date of yesterday (Tuesday) to Thursday and the date of today (Wednesday) to yesterday (Tuesday). And finally the one from Thursday to today (Wednesday). Mouhahahaha! I always land on my feet !!! Even back to goal, I score !!! And Friday, except if she flakes, I will meet a sexy schoolmistress. She’s on holiday, so it’s cool for her!

The Italian came last night around 10pm. But before she agrees to come, I have undergone some shit-tests “you don’t even know what my first name is…” She was right. “Let’s be frank ; except for being included in your list of one night stands, what is my interest ?”; “Did you meet many girls of this dating site?”. Pff, all this to try to eliminate me, to push me to the wrong step, to do not have orgasms in fact. But I have good answers for all this bullshit, they have asked it to me so much… Besides, the best remains the dodge: do not enter this silly game.

Finally, she told me positive stuff “usually when guys ask for my number but I do not give it, you’re the only one who has not asked so I gave it to you”… er, WHAT THE FUCK ?! She’s a little weird, is not she? “I like confident people who have audacity and an open mind.” I like it better.

She had a nice face, but was a little fat, too bad (I always look at the intercom before opening my door).Well, she really turned me on by text, so I welcomed her. Apparently, she had two dates with Adopte’s guys before me in her whole life: a bad lover and one with whom she did not sleep. I told her, a little by provocation “never two without three, beware.” She told me that she was not sure of coming to see me because I sent too short answers on Adopte “yeah it pisses me off to write on the phone so I rush my messages, it gives me a nonchalant side.”

As soon as she arrived, we played, we flirted. I would have liked her to undress directly, but no, we drank a glass of wine and then slipped on a strip-card game: we ended up naked very quickly (she has cute little boobs but her buttocks is a little wide as I said above)…

Then once we had no more clothes, we made pledges: the one who loses fingers/shakes the other under the table. Each pledge lasted 30 seconds. I lost 5 times and she 2.

To thank me, she proposed to blindfold me and tie my hands, and then to fuck me.

I said OK. I was afraid that she took this opportunity to plant a knife in me and steal my stuff (it’s my paranoid side) but hey, this loss of control was exciting. It was really good to see nothing, to control nothing while she was playing with my cock and sucking me. This way, I only concentrated on my feelings. Finally, she came over me and fucked me (she was riding me). She came again, apparently it had been long since she had not so much pleasure, especially since she did not touch herself (according to what she says).

I just had a flash of genius. Maybe our ancestors discovered the fire by rubbing their cock too hard in a pussy.

Finally, I feel I’m not liking my long-distance relationship with Virginie much any more. I’m starting to get tired of it.

Well, I’m going back to my boring work in the office …