How you can mix Speed Seduction and Online Dating 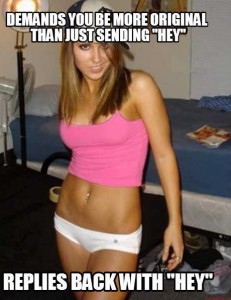 Hello dear friends ! I will tell you a story about ass, as usual… but, this time, also about pancakes and speed seduction (yes, I’m innovating).

First of all, what is speed-seduction ? The man who invented this method is called Ross Jeffries. It is based on Neuro-linguistic Programming and hypnosis. The NLP is a set of models and of techniques of personal development coming from the United States which are intended to improve the communication between individuals and to improve personally. Well, it is the official speech. The reality is that they are techniques of manipulation intended to influence the emotional state of people. Unfortunately, there is not a lot of translations in French so I have to do with few. I thus translated myself the first ebook of Ross (on my blog : Comment mener au lit les femmes que vous désirez). Very instructive.

I approached this chick on Adopte in December and then we had stopped talking because she did not connect any more then I had sent my number point-blank… in the nerve! She had answered simply by her number (look for the error). Since then, we sent more or less hot texts but nothing crazy, we also spoke about pointless things (Gossip Girl, our parties, etc.) By the way, last Saturday, she was my plan B : I asked her to come too to the club where I had planned to meet the girl of the ice cubes (if you do not remember, read my previous texts) just to be sure to have a fresh plan and to make profitable the 20€ of admission. Hey yeah, I am not a dead man of hunger, my sexual satisfaction depends on no girl in particular. None of the two having come, but this one didn’t lie to me, I thus decided to cross a speed with this-chick-who-has-a-name-of-precious-stone (we will call her Precious Stone) and to next the other bipolar.

I give some explanation: If I manage to make her say that she wants to kiss my stomach, then to go down taking my sex between her lips: SHE is going to imagine herself doing it while she writes it and it will become an obvious fact for HER that it is necessary to do it for good. Additional argument, a girl with whom we have already made love virtually will only very rarely make a last minute resistance.

Excited by so much lyric, it has been one week since she begs me to fuck her. I was not able to take care of her case before because my aunt died, then my parents left to Lyon for the funeral and I guarded their house. As a result, I made her wait (I didn’t want to go to Aix just to bang a girl). In brief, yesterday, I believed that she was flinching because she had to come to my place… but, at the last moment, she asked me to come picking her up at 10pm. Good point for her on the other hand: she kissed me when she saw me, without hesitation. We went to my place and we made love after she took some Fervex. She announced that she was sick so I also took one Fervex, in prevention. What an hypochondriac ! I hope that I have not the flu now due to exchanging physical fluids. I don’t want to be immobilized all the WE because I have, so to speak, some projects.

We fucked 3 times, she had 3 orgasms but the last time I didn’t finish : I was so tired. Then, she watched a movie and I fell asleep (she said I snored). In the morning we did it again, and she shouted my name « Oh mon Dieu, oh oui Fabrice » it turned me on but still not finished !!!!! Later, we cooked pancakes, I ate a lot and we did it again-again… This time, I finished (and fuck, it was soooo good, would need to be frustrated more often)! For the anecdote: I saw that she had received a text of her friends « go and enjoy his dick , lucky girl ». After knocks, she got dressed and left (it scared her that I open the window of my bedroom to aerate).

This girl, is one of those little princess from Aix who goes to the law faculty,  who drink a lot of alcohol and take coke every week-end in the VIP room of a club I cheerfully despise even if we cannot deny that there are a lot of cute hotties. Her best friends are hot too (at least in the pictures I saw : I can intend to go to parties with her and to make my buddies taste her friends). I feel a pleasant connection with her, although she does not suck on the knees, and so I hope to see her again !

It ain’t over yet ! I received then a text of an Asian girl I kissed in September in a park (reread my adventures if you have difficulty in following). My blog had shocked her because she did not want to be, I quote « the number 150 before 2013 »… She exaggerated of course, but we had not meet again. Except that, all the same, a libertine of my tempering : it turned her on… Then she came and I told her that I did the pancakes for her. I can tell you that I scored points!!!!! We visited my cuddly monkey on my bed (its name is Arnaud like my buddy who offered it to me) and we kissed, then we undressed a little but she did not want to do anything more then I fell asleep against her… until now, more or less.

Kiss. May the God of the Game be with you !