Can we talk about ass in front of chicks ? 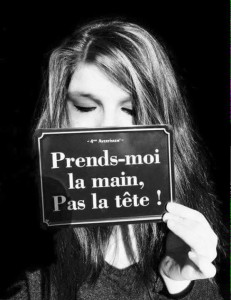 Why don’t we talk about sex in the same way between men and when there are members of the opposite sex with us?

“GUYS WANT TO PRESERVE THEIR IMAGE.”

This is the first thing I said when I heard some men say as an absolute truth that we speak better and in amore sincere way about sex when we talk between men.

Not only this is not always the case but I have often observed the opposite. And nights with balls talking about sex… it’s good when we are 18 years old, seriously.

It’s always this latent hypocrisy I guess that comes into play.

The guys are also afraid of being ashamed if they say something wrong about sex and to be judged. For women it is a little bit similar, too.

After all, filtering our words is treating girls differently just because they are girls.

This seems quite symptomatic of the difficult gender relations in our time. We are torn between modernity, diversity and yet still full of prejudice and gendered stereotypes. We struggle to give a sense to things.

Some girls feel compelled to play the offended as soon as it’s about sex and there are guys in the place (even if they talk blithely alone with their girlfriends and full of crispy information read in magazines female).

Many men, wanting to be thought of “good” guys, feel compelled to do the same as soon as there are chicks around.

In light of studies on the subject, synergies in mixed groups are creative, even higher compared to groups composed of just one sex.

It could be instructive to discuss more often about that with the fair sex (I’m not speaking of mine).

Differences between men and women

By focusing on more than 120 properties ranging from empathy to sexuality through the interest in science and introversion, a statistical analysis conducted on a sample of over 13,000 individuals did not confirm that men and women belong to two identifiable groups.

This study suggests that, outside of certain physical criteria, the categorization of humans on the basis of gender is not pertinent because the similarities are more numerous and important than the differences.

Most of the distinctions we make, stereotypes, have therefore no reason to be. I like winnowing and teasing as I would do with male mates (with a stronger sexualization). I do not like the attitudes of divas nor the preferential treatment if she does not suck me like a queen. But I will not tolerate in guys neither. I do not pay all the drinks at the bar when I booze with a girl. Once it’s me, once it’s her, it seems fairer. Like with my bros. At the taekwondo, I don’t care if I fight against a woman or against a guy in training. Simply because there is nothing personal there.

Is it a matter of trust, intimacy, modesty?

We adapt our behavior to the link that we have with the person in front of us. I speak more easily of my STD to a doctor or a friend than with a stranger. Matter of trust.

I’ll talk more easily about my dick problems with my friends that my girlfriends. Just as I prefer to talk about it to my father than my mother. Although both they have wiped my ass when I was young.

This brings me to a question … Does intimacy develops more easily with people of the same sex? Do we think that they can better understand us?

Is it not ultimately a matter of intimacy, all that? Like if a woman entered a locker room full of men at the gym : general malaise. Is it modesty, to be right?

It absolutely does not bother me to get naked in front of the guys in the locker room when leaving the sport. Although I would find it weird that a dude watches my cock insistently. In front of a group of women, it would surely be different. I might be hard. Is not the purpose nevertheless not to show them our cocks so that they suck it?

With what I’ve written, one might conclude that the average straight man seems to have a homoerotic vision for intimacy. What man has never lived these intense moments, side by side with a stranger, dick in hand, standing at the urinal of a restaurant?

Because of a seductive report?

In society, we all carry a mask. We are not the same alone than with someone. We also adapts to different people. We do not talk like to a child the same way than with an old woman. We do not talk to a bitch we fucked twice like with our girlfriend for two years. Even if we should perhaps because people don’t like be patronized nor that we relax in general.

We do not talk to a girl that we would like to fuck like to a family member. Is the problem there that a man and a woman not related genetically are by default and sometimes despite themselves in a latent seductive report, at different levels depending on the context (even if the desired purpose is not always sex)?

I think so, and so most people want to maintain their social character. Although the report is unconscious seduction, sexual words would echo in the imagination of the other. When our friends would maybe laugh, maybe our girlfriends are going to repeat the thing to their friends, etc.

There are standards to be respected but do not abuse

If I hold the door to a girl, that I help to carry her shopping, if I leave my place in bus for a pregnant woman, does it makes me an horrible sexist?

It’s stupid to want at any costs do not meet the standard, until eliminating the “good” stereotypes and friendly uses… I will continue therefore to do not fart in front of the chicks I want to fuck. Not because it’s not natural to drop a fart, but because it could block her and delete me from her list of contenders.

A girl who comes naked in a locker room guys can turn us on, but we will also say that she is crazy. That’s the thing.

Do not break our idealization dreams

Toilets are often separated, and it would bother me that a woman hear me shitting. Just like that would bother me to hear someone shitting and it is a pretty young woman who goes out the crapper. Perhaps as much as her by the way.

Do not cook (too much) rules

When I play a game with a girl and she wins, I applaud but neither more nor less than if she was a guy. I do not play either below my level to make it easier for her. I hate to see guys cooking with the rules in their favor to avoid vexing women (hoping to fuck them).

The reports are thus healthier. More authentic. More genuine. Everyone feels respected, and it is not uncommon in these conditions, that we then start flirting in a more uninhibited and speaking of sex or other stuff we usually are not supposed to in a group mixed. A girl who can speak without hypocrisy of those subjects that inspire us (they are like us) becomes even sexier in my eyes anyway.

And that’s why I try hard to do it in front of women. I often surprise them or sometimes refers to their own blockages and thus puts them uncomfortable. But never mind, I feel more free. More real. The real ones will enjoy !

It would be damaging to limit our originality because of the thing we have between the legs. Why not becoming Human, and looking beyond the roles that we were given at birth ? The relationship with the opposite sex would so become less problematic, less anxiety. And the reason is because we would not only talk to a representative of her sex, but to a whole person.

Let’s say that in general (there s always some counter-examples blahblahblah): Girls do not understand guys as well as other guys, because they are not guys, they have not been raised as boys (sociology) and because they have no dick (biology). In sum, because small differences between us matters and are hindering us.

But we are maybe (probably) wrong. From my experience, a girl who is happy to talk to me about sex without too many obstacles is often cool and open later.

previousIs sexual prizing the key to her… ?
nextIs logistics important in order to make out?