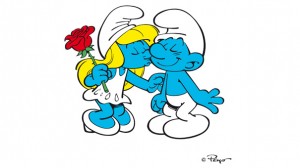 The inevitable happened, such the mononucleosis contaminating two teenagers who kiss, the temptation to be in couple contaminated me when I met a blonde cutie. Everything began last week, I received to my surprise the friend request on Facebook of an attractive Smurfette. A hot chick who adds you like that, it is the dream of every heterosexual who respects himself. It is little bit like at the time of MSN when we had a new contact and when we asked « who is it ? » hoping whether it was a hottie but in fact, it was just an old buddy of whom we had lost sight for quite a while and of whom we strictly didn’t care. Or a ugly girl who begged our saint dick through an obnoxious trap.

In brief, by digging a little with my usual tact « WHO ARE YOU ? DID WE KISS IN A CLUB ? », I discovered why she had sent me this friend request. Three months ago, I had sent her a poke and my profile had caught her attention but she was in a “serious” relationship. Now that she had broken up, she wanted me to be the one who was going to make her forget her painful separation. Which just goes to show that you should never lose hope… it is what we call a long-term investment. We chatted during a few hours on a Sunday morning, then I conclude the conversation by a legendary : « Well, here is my number 06 XX XX XX XX, but do not take advantage of it to harass me.
– I never harass people.
– Make good use of it all the same! ;) » I disadvise the use of suspension points « … » which often imply weird and recommends rather the use of the wink more connoted « I’m teasing you » or even absolutely nothing and letting her imagination work. Furthermore, when a girl does not know if you are kidding or if you are serious, that can add some sexual tension. What really added sexual tension : the naughty pics she sent me.

We then agreed on a meeting and at the end of this one, I asked innocently: « Can I give you a kiss ?
– Yes… » And there, in her most great surprise, I French kissed her without any hesitation. She doubtless expected any weakling’s kiss… She had not understood yet with whom she had to deal, the unsuspicious girl. A little later, after she wrote me a text I answered with an agitator : « About the kisses, I’m pretty sure that we can do better than that ! » I suggested seeing again by going to the movies ; and she could sleep at my place with me of course (gallantry!). Finally, she came to my place, but I just screwed her because we missed the hour of the session and then honestly, it was not really our point. She made a resistance for the principle which I by-passed by licking her lips through her panties (and no, she was not wearing her string on the mouth). Fuck : she wanted a relation of couple. I was in reality not about to sign for a doggy style and a kiss on the forehead but for the marriage, the house, the dog and the kids.

An attractive girl, smart, etc. but especially very attractive: it is a magnificent trophy for the buddies, that makes you proud with your parents, (especially dad). Furthermore, she increases your value in the street. It is a kind of ideal, it’s somewhat as if, for once, I had found a darling “at my level”. It is subjective because, of course, most of people imagine being better than they are in reality, from an objective point of view. It is not a bad thing, because that allows to become and do better : the modesty castrates. But I quickly became disenchanted: she had not much social life, lived far (in a lost village)… What maybe explains that she was open for an Internet date. Otherwise, she supposedly liked sex so much with me while because all her ex were « bad in bed » (I’m just quoting). Does she tell it to everybody? I don’t think so, I think that indeed 90 % of the male population is downright disappointing on the horizontal plan.

Besides, it is girl’s who acts like a princess, at the foot of whom are all the boys : I wrong-footed her. I acted with a casualness and a “I don’t care” attitude rather visible which seduced her. It pissed me off because she was hopeless, when she came to see me at Aix, she wanted that I pay her the parking at 2€ for one night while I accommodated her. Why not the gasoline too ? She was not satisfied either that we paid the restaurant once her once me. As for the movies, let’s not speak about it, it was necessary to her that she eats her salty popcorns otherwise she threw a tantrum. It is by trailing round me in the street that I really cut her case : looking at other attractive girls, hot heuuuu sorry cute, approachable and certainly not more boring allowed me to put things in perspective. I then declared her that I was willing that we see each other from time to time for the pleasure of the senses, she answered that she was going to present me to her parents. I answered « no thank you, good bye ».

Good bye. May the God of the Game be with you !