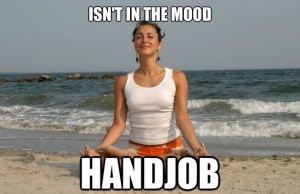 I have almost been flaked by little Virginie but she eventually came to see me. The poor girl was put under stress, it was necessary to reassure her. I do not really realize anymore how much it is difficult for a beginner to go out of her comfort zone to make love with an unknown. It is way easier to stay at home reading a book… but it is impossible to have the satisfaction of having moved on in her life otherwise. Not doing what we really want to do at the bottom of us while we could very well, I call this “weakness.” She wasn’t weak.

The etymology of the first name Virginie is something like “pure/virgin”. I had kissed her in front of The Lion King last week, we had undressed and I had licked her. She thus came watching the end of the movie, and getting a massage. I have undressed her again (she is still hot) and approached her of the orgasm… Then I suggested making love, and thus making her lose her virginity. Her answer : “I really want you but I can’t”. She took advantage of it to tell me that she was on her period. Cold shower. But I do not give up so easily.

After many discussions, she told me that I could take off her tampon. Bad luck, when I wanted to catch it, it broke inside. I thus left for expedition to find it then I took it off. A little bit gory, I have never had to do that before, but we laughed at it.

I asked her if she wanted me to put a condom. Answer: “it is better”. Obviously it is better, I even wonder why I ask the question. Then, I approached her vagina, I don’t really know if I penetrated her or not, ” it hurts too much, stop, I don’t want any more”.

I tried to tell her to shake me or to suck me or whatever but nothing to do. “It is the 3rd time of the week that I feel guilty : Two guys told me that they were in love with me but because I am not polygamous I rejected them, and you tell me that I frustrate you… sorry”.

The subject is the following one: did I penetrate her ? Am I a not delicate person ? On the other hand, I do not really know what different I shall have been able to do ? Besides, she arrived at 3 pm and left at 5 pm for her buses : we had a problem of time.

Fortunately, she said that we would see again each other next week, if I was OK. I think of making her jump on me so that she put it inside of her alone.

Then yeah, we could wonder if it is not a waste of time, getting bored with these problems of virginity, and so why not just nexting her ?

Yes but no. It is without taking into account the human dimension. First of all, because it is necessary go 2 minutes in her skin : if for once that she makes a step towards the guys, I rejected her, that would have been able to traumatize her. And don’t forget that it is an honor to be chosen to be the first one. Then, I have no problem with making efforts if the other person does the same, I just don’t want to be the only one. Finally, because I feel a strong connection with her. I want to say, she attracts me physically she is cute and everything. But there is something more… First of all, she has an enormous IQ and good emotional sensibility too, thus she is a superior intelligence and I like that. Then, she is really mature for her age in spite of her sexual inexperience : I have the impression to speak with somebody of my age or more (that it is because she reads a lot and because her parents separated and work a lot so it is her who takes care of her family). To finish, she is a pearl of purity: she does not drink, does not smoke, does not take the pill, she eats healthy and not too much (I think she is going to LOVE sex to compensate if you want my opinion), she has problems but remains positive and reads my blog. In brief, she is a very good genetic environment for possible genes of Cyprineman Junior! Roughly, I admit that I like her very much, she has something special in my eyes, I’m not saying that everybody would like her but for me she is very good, in addition she doesn’t look like against an “open relation” and all this frightens me a little! Me in the other hand, I do not risk to wimp out for once that I find a girl I really like (even if we seem to be two opposite (libertine/virgin) we are alike on quite a lot of points!) Time will tell…