Do not waste your time with not really interested girls 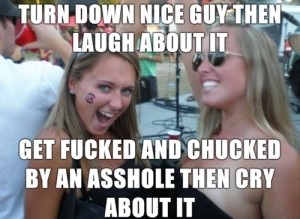 The biggest obstacles, in seduction, are not her friends nor the AMOG, but the time itself.

Quickly work. Quickly progress. Make her invest in you before investing in her. For example, sometimes I ask to a girl exchanging our numbers even before intending to tell her what I’m doing for a living. PROFITABILITY !

The most common waste of time, it’s the first receptive girl of the evening. Indeed, after some lousy reactions, the first opened women are like blessed bread. You can thus easily lose 2 hours with them.

If you begin hardly to warm up socially, this group in particular will fall really well. The problem is that you are not yet warm enough to dare progressing physically (not enough practiced tonight) Then you do not act rather quickly and let the window of action close.

They think that you are funny but are not sexually attracted.

The price to be paid

You cannot either progress more or leave. It is thus a waste of time; and more you will stay more leaving will be delicate. Having invested time, you really hope something in return… then you remain here like a loser! To reassure you, you say to yourself that there is always a chance that she is a little bit attracted.

Then, you also say to yourself that it is all the same nice to stay with two cute girls even if we do not fuck them, easier in any case than leaving in search of a new scamp to whom giving a series of 6 orgasms in a row. But, in reality, it is always the same problem : you do not show your balls ! For your own good, like for the good of the women who will have a story with you : do it ! YOU write the story.

The only way of getting out of this trap, is to introduce yourself to all the girls who approach us WHILE we still are with the cuties. It is a good opportunity to meet new women because they see you with two beauties (principle of preselection).

Or then you can use both figureheads as a base where you get fresh supplies and leaving in search of a better option. The purpose here is not making the others jealous, but if they become jealous then it is so much better. It is important to be seen with these girls but let’s keep in mind that we do not owe them anything : You are a funny and interesting guy who can speak to whoever !

If they say « you are a womanizer », it doesn’t mean that they are suddenly interested. You did not stimulate their interest but simply titillate their ego by removing them your attention.

If you cannot leave then try at least to meet new people. The worst thing in the life is being bored and wasting time. And don’t worry if they think you are impolite when you disappear like a thief.

We don’t give a damn, after all, remember simply that they made you waste your time. And then, if for them it was better going back home alone rather than coming back with a stallion which would have made them rise to curtains : it is too bad for them! You cannot get them to listen to reason but you can know in your strong inside that it is them who lose the most.

It is not their fault, it’s yours

It is not the fault of the girls if you waste your time. It is your fault if you neither progress physically nor leave. You meanly used them as excuses to don’t have to move your ass, excuses to stay in your comfort zone and not approach new girls whereas they used you to protect themselves from the other oafs of the bar.

The worst feeling it is when, two hours later, the group of girls abandons you « Well we leave, we are going to another bar, good bye ». Duuuh !