Do you think that it is the period (first hot season) which makes me fuck a lot like that at the moment? 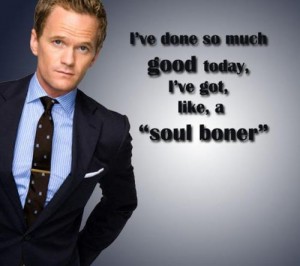 Do you remember Marie ? The girl with whom I was in an “open relationship” during 3 months ? The one I have seen again in a club something like fifteen days ago and who royally ignored me because she had the tongue of a guy in her throat. Well… I said to myself that I was going to punish her, well so, I poked all her friend list. As a consequence, some have answered. As a result, on Tuesday evening, I had a date with one of them.

Stressed at first, I said to myself « I don’t care, I’m gonna make a physical escalation on her ». My CREED was « fearless&relentlessescalation ». After a while, I took the excuse of looking at her bracelets to caress her forearm. Then, I downright took her hand the most naturally of the world and looked at her in the eyes. She maintained my eye contact then looked away and laughed (nervously). After a while, when she could not handle sexual tension any more, she said « what’s wrong…? » Then I simply answered « are you disturbed ? ». When I do this technique to make the sexual tension rise, it is never me who smile nor who speaks the first one, because it is an attitude of pussy. On the contrary, I use silences (and particularly these moments) to assume this tension between us and stress it.

She could not handle it anymore so she suggested me accompanying her to the party of one of her friends. Understand, this girl is in school of art, then the apartment was full of girls and gays. Quite cute (the girls not the gays). And crazy people, well, IE artists… Well, you know the fable of La Fontaine which ends like this « a doggstyle in the hand is worth two in the bush »… So, I stayed on my initial target even if the temptation was big. There was in particular a double of my first girlfriend (thus I dreamed about her the next night) and a tall blonde whom I had apparently poked but who didn’t answer. I wonder how girls whom I have poked who did not answer can remember my face 3 months later, they have nothing to do in their life or what the fuck ? Seriously, it is me who is not normal of poking them or it is them who are so stupid that they grant it so much importance? In brief, the girl tried to kiss me and was allowed just to touch my lips, I moved back or avoided. She was excited because in the meantime I caressed her and kissed her somewhere else …

At about 1 am, I said to myself that I was going to go back home. Because I work me, and at 8 am besides ! Then I told the fortunate girl who is on holidays, « You take me back in the elevator ?
– Yes, gladly ». Once there, I said to myself « I don’t give a damn, I enjoy putting the pressure on them ». As a result, I fiddled with her, put my hands under her dress, kissed her tits, played with her clit and fingered her. She told me «I had to sleep at a friend’s house but if you want we can go to your place …
– OK. »

The positive points :
– I had not banged a young Frenchwoman of north-African origins (and even less a cute half-blood with green eyes) yet ;
– She has a piercing on the tongue ;
– I fucked a friend of Marie to piss her off.

Do you think that it is the period (first hot season) which makes me fuck a lot like that at the moment?

By speaking of sex. Padawan saw again the American (the one I had found and kissed in a club). He invited her to a lot of romantic meetings and screwed her in his car by pleading that it was better to look at stars. Very good! But, now, he continues to see her regularly, he makes her do strolls in the nature, or discover the city, or invites her to the restaurant, etc. Except that he tells her that he does not want to be in couple with her. But the girls say “yes yes it’s OK for me” then weave their web by trying to make us fall in love and by falling in love themselves. Except that if it does not work, they will have the hatred! If the guys like me do not let the girls with whom we want nothing more than sex hope, it is for a reason! It is to avoid this kind of situation : the girl is in love (she falls in love too easily because she she is in lack of affection), you like her but nothing more, and you feel guilty of breaking her heart.

2 thoughts on “Do you think that it is the period (first hot season) which makes me fuck a lot like that at the moment?”