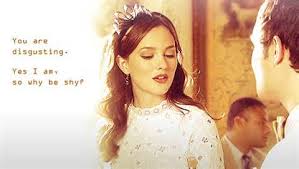 The guys never practise enough the pushy attitude. They practise a lot the fact of being sociable, of opening sets but are not really sexual… If you want to be sensual, you have to risk to be strange. You have to take risks. In fact, we cannot always avoid the oddity when we try to pick up. So it’s better to accept it from now. But, don’t worry, the man who is strange « in the good way » is also the one who fucks the most.

Don’t be afraid to be seen as « strange »

By using a sensual look, by looking at her lips while imagining kissing her and by speaking really slowly, you can put her in sexual trance. But the women are going to try to frighten you, to make you regret having dared trying to seduce them by treating you like if you were a weirdo. You will never be at the top if you always act with restraint because you are afraid of being tidied up in this category.

I say fuck social pressure. It stinks, that’s it. It is just a test that women use to see your value. If they like you, you are sexy. If she does not appreciate you, or if she feels that you are not at her usual level, you are strange. But it can change at any second. You can make exactly the same thing on two girls, one will say that you are sexy, the other that you are disgusting. Which one is right ? None.

Understand that if a woman tells you « you are disgusting » when you keep silent and when you maintain her eye contact, it just means that she tries to break the tension because she is excited but it makes her feel guilty.

The fact of telling you that you are strange can also come from her need for not wanting to be thought of as a whore. She is interested, but is going to persuade herself that she is not. She can even tell to her friends that you harassed her and that it was freaking out, just to protect her social image.

Of course, you will try to be sensual but will be rejected sometimes. For example, You will maintain her eye contact and she will give you in reply a look making you understand that she finds you yucky. Then, she will turn around and not calculate you anymore. Ouch, it hurts. But there is nothing to worry about. It is not so different from a verbal rejection. It is even rather better, in fact. More honest ! And keep in mind that, one day or another, she probably fucked with a boy less cute than you…

I love to be strange. I love putting the pressure on the girls. Seeing the girls being surprised,  turning red or becoming nervous is a lot of fun to me. I know that you are afraid of being labelled as a « weird guy » And this is the reason why you do not dare to escalate physically. Then you stay in sociable mode and waste your time.

But your biggest weapons in seduction are : the eye contact, coming closer and touching her. Attention : like the atom bomb, they involve quite a risk.

The true meanings of words

The guys have to overcome this fear. Beginning a conversation with strangers, is not « weird », being sensual and progress tactilely is not « disgusting » and pushing directly things on the sexual plan is not that « pervert ».

If you are sociable and if you begin conversations, women will test you by saying that it is strange to proceed like that. Or will give you that look of lousy sceptic that we all know. All the other guys have not enough balls to approach the women, but it is not strange… Pff. And we want to persuade us that it is better to do like them…  ?

When you will be sensual, women will try to make you feel « dirty ».

When you will be sexually aggressive, women will test you by saying that you are perverse (like if it was a bad thing…) Most of the guys are afraid of the label of « pervert » because it makes people think to an old fossil who masturbates in a sexshop.

But it is not at all that, and you want to be « pervert » because you do not want to be asexual. Do not let the social pressure have so much influence on you as it has on these people stuck in their conditioning.

previousWhen you will attract a hot woman, you will be tested
nextDon’t be afraid of looking pervert because women are pervert too