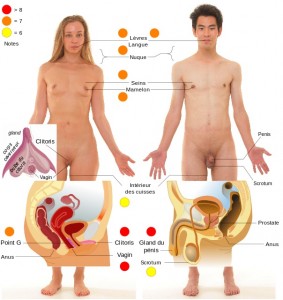 An erogenous zone (from Greek ἔρως eros “love” and English -genous “producing” from Greek -γενής -genes “born”) is an area of the human body that has heightened sensitivity, the stimulation of which may generate a sexual response, such as relaxation, the production of sexual fantasies, sexual arousal and orgasm.

Erogenous zones are located all over the human body, but the sensitivity of each varies, and depends on concentrations of nerve endings that can provide pleasurable sensations when stimulated. The touching of another person’s erogenous zone is regarded as an act of physical intimacy. Some people may resent stimulation in this manner while others may find it pleasing, and this may also depend on the relationship between the people.

Erogenous zones may be classified by the type of sexual response that they generate. Many people are gently aroused when their eyelids, eyebrows, temples, shoulders, hands, arms and hair are subtly touched. Gently touching or stroking of these zones stimulates a partner during foreplay and increases the arousal level. Also, the gentle massage or stroke of the abdominal area along with kissing or simply touching the navel can be a type of stimulation.

Erogenous zones are either nonspecific or specific.

In the nonspecific zones, the skin is similar to normal-haired skin and has the normal high density of nerves and hair follicles. These areas include the sides and back of the neck, the inner arms, the axillae (armpits) and sides of the thorax. An exaggerated tickle and anticipatory response are responsible for the heightened sensual response.

Specific zones are associated with sexual response, and include the lips and nipples in addition to areas of the genitals, notably the foreskin and corona of the glans penis, clitoris and rest of the vulva, and perianal skin. The neuroanatomy and neurophysiology of erogenous zones is partly unknown. These zones are apparently mucocutaneous skin. The rete ridges of the epithelium are well-formed and more of the nerves are close to the external surface of the skin than in normal-haired skin. These zones seem to have a high density of innervation, an efficiency of wound healing, and a capacity to stimulate generalized cerebral arousal. Moreover, a connection with the reward system seems also necessary.

The foreskin, which carries the ridged band and lower frenular delta has mucocutaneous end-organs extending from the distal margin to the point where hairy skin starts. The thin dermis and minimal subcutaneous tissue results in closely set nerve networks. Vater Pacini corpuscles are present. The mucocutaneous end-organs are formed after birth, with few in newborn infants and many well-organized endings in adults.

Within the anterior wall of the vagina, there is a patch of ribbed rough tissue which has a texture that is sometimes described as similar to the palate (the roof of a mouth) or a raspberry, and may feel spongy when a woman is sexually aroused. This is the urethral sponge, which may also be the location of the G-spot — a structure described as an area of the vagina that some women report is an erogenous zone which, when stimulated, can lead to sexual arousal, powerful orgasms and female ejaculation. The existence of the G-spot and whether or not it is a distinct structure is debated among researchers, as reports of its location vary from woman to woman, it appears to be nonexistent in some women, and scientists commonly believe that it is an extension of the clitoris.

The lips and tongue are sensitive and can be stimulated by kissing and licking.

Many people find a gentle scalp massage, or any stimulation of the hair follicles, to be anywhere from relaxing to extremely stimulating.

The neck, clavicle area and the back of the neck are very sensitive in both males and females, which can be stimulated by licking, kissing or light caressing. Some people also like being bitten gently in these areas, often to the point that a “hickey”, or “love-bite” is formed.

Some people find whispering or breathing softly in the ear to be pleasurable and relaxing, as well as licking, biting, caressing and/or kissing it especially the area of and behind the earlobe.

The areola and nipple contain Golgi-Mazzoni, Vater-Pacini and genital corpuscles. No Meissner’s corpuscles and few organized nerve endings are present. There are concentrations of nerve tissue in the area of ducts and masses of smooth muscle. The hair surrounding the areola adds additional sensory tissue. The mass of smooth muscle and glandular-duct tissue in the nipple and areola block the development of normal dermal nerve networks which are present in other erogenous regions and the development of special end organs. The entire breast has a network of nerve endings, and it has the same number of nerve endings no matter how large the breast is, so that larger breasts may need more stimulation than smaller ones.

Intense nipple stimulation may result in a surge in the production of oxytocin and prolactin which could have a significant effect on his or her genitals, to the point that some people of both sexes can achieve orgasm through nipple stimulation alone. Having the chest, breasts and nipples stimulated manually (hands), digitally (fingers, toes) and/or orally (mouth, lips, teeth, tongue) is a pleasurable experience for many people of both sexes.

Many people find stimulation (kissing, biting, scratching, tickling, caressing) of the abdomen to be pleasurable, especially close to the pubic region. It can cause strong arousal in men and women, in some even stronger than stimulation of the genitals. The navel is one of the many erogenous zones that has heightened sensitivity. In a 1982 study of eroticism in dress entitled “Skin to Skin,” Prudence Glynn claimed that the waist symbolized virginity and that it was the first place that a man would touch a woman “when indicating more than a formal courtesy”.

The tailbone, located near the base of the spine, just above the anus, is an erogenous zone.

The skin of the arms, and specifically the softer skin of the inner arms and across the creased mid-arm bend covering the ventral side of the elbow, are highly sensitive to manual or oral stimulation. Caressing with fingers or tongue, more vigorous kneading, and butterfly kissing can initiate arousal and, in some cases, induce clitoral/vaginal orgasm or penile ejaculation without direct contact with the latter areas. The mid-arm bend is especially sensitive due to the thinner skin found there, which makes nerve endings more accessible. Arm sensitivity may be reduced or concentrated to a more narrow range by excessive muscularity or obesity on the one hand, or transformed to uncomfortable tenderness by excessive thinness on the other.

Some consider the armpits to be an erogenous zone. If pheromones exist for humans, they would likely be secreted by a mixture of liquid from the sebaceous glands with other organic compounds in the body. George Preti, an organic chemist at the Monell Chemical Senses Center in Philadelphia and Winnefred Cutler of the University of Pennsylvania’s psychology department, discovered that women with irregular menstrual cycles became regular when exposed to male underarm extracts. They hypothesized that the only explanation was that underarms contain pheromones, as there was no other explanation for the effects, which mirrored how pheromones affect other mammals.

The fingertips have many nerves and are responsive to very light touches, like the brushing of a tongue, light fingernail scratching or teeth stroking. The sides of the fingers are somewhat less sensitive and more ticklish. Both light and firmer touches work well at the junction of the fingers. Human fingertips are the second-most sensitive parts of the body, after the tongue.

The thighs can be sensitive to touch.

An exaggerated tickle on the back of the legs and knees can also be sensitive for some.

Because of the concentration of nerve endings in the sole and digits of the human foot, and possibly to the close proximity of the area of the brain dealing with tactile sensations from the feet and the area dealing with sensations from the genitals, the sensations produced by sucking or licking the feet can be pleasurable to some people. Similarly, massaging the sole of the foot produces similar stimulation. Many people are extremely ticklish in the foot area, especially on the bottom of the soles.

To read my other ebooks that are about the other part of the seduction process, I suggest you to click here.

Don’t be ashamed of enjoying sex (but stay in the legality). Say “fuck off” to social pressure… after all, who decides what is normal or not ??? But do not become a weirdo nor do weird things…

When it comes to sex, weird is your enemy. It is counter-productive. And stress often makes you weird. But you’ll become used to it. You’ll get used to sexual situations. You’ll be more comfortable in this situation and your partner too… because emotions are contagious.

And women are often share between stress and excitation/motivation.

Too many woman have lose faith in us, men, when it comes to sexual pleasure. They do not believe in us and don’t even wanna try : it’s a lose-lose scenario instead of the win-win scenario it could be. In their mind if you don’t prove you’re good, you’re basically bad in bed… like the others. Women consider us basically as losers.

I am going to help you to understand women. But, in the meantime, do not behave as a dead man of hunger who accepts and tolerates everything and anything just to have sex PLZ. If there were not so many sex starved dude out there, women would more go in for sport and would be hotter because they should fight for us.

Well, this is just my opinion!

They have the sexual power and we struggle to get out while the going is good.

But well, when we become a good fuck, we reverse the trend all the same!!! Fortunately!

Extract from : The awesome lover’s manual