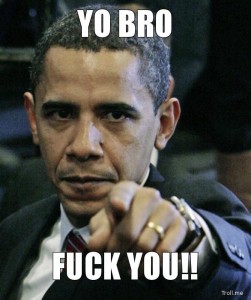 Last night we went out with Arnaud and Hafid (the dream team which make girls lose their virginities) : it was quite fun.

Weird thing : the day before, Arnaud had a date with a chick he met on Adopte, he kissed her and everything but when he showed me her profile: we understood that I also talked to her and that we planned to meet the following day. So instead of intelligently propose her a threesome, he sent her a ridiculous text message, something like « hi honey, I’m with  the Chabal’s cousin » (I don’t tell it to everyone but I told it to her because she is a fan of rugby). Arnaud is an idiot sometimes… he didn’t realize that he wasn’t the only guy she was flirting with online. He put her uncomfortable, well, I lost a chick but it doesn’t matter. I’m happy that Arnaud has fun (I just hope that his needy behavior will not make him lose her).

Back in the small clubs of Aix with Arnaud and Hafid. Big contrast with the big medical party, but well, we decided to get there early to enjoy the rush of chicks which occurs at around 1:30/2 am ! It was a good plan : we were approached by two girls , one who excited me a lot with her glasses. She said « you were at the bar -where-fucking -people-spilled-shooters-on-me, right ? » But they were not very funny so we moved on another set, 3 girls… the grass to graze seemed greener. Hafid and I cooked a lengedary sandwich with a miss-big-tits as ham (I didn’t see her face , I was behind her and in front of him ), but he put his thumb in the air like saying  « well ». Then I danced with another girl of the group « We know each other, right ?
– Do you think that we already kissed ?
– Yes. » Flash . « Ahhhh yes : last winter. You are Charlotte (I surprised myself, fucking memory – definitely there are many Charlotte in France) .
– Yes, did you pass your exams ?
– No.
5 minutes later (she was drunk) …
– By the way, did you pass your exams ?
– No.
5 minutes later (well, I want to know what drug she takes, looks amazing) …
– Anyway, are you gratuated ?
– Yes. » It made ​​me happy to see her so I sent her a short and naughty text message after the night but she did not answer.

Later, I wanted to move to the next club which receive the rush at 3pm (later there) but an horrible thing happened. Huge stress. My jacket that I put in a dark corner (I like dark corners) had disappeared (with my glasses, gloves, scarf and everything). I asked everyone to finally understand that a fucking idiot brought it back to the cloakroom. I got a terrible fright! Seriously, take care of YOUR life, people. After this bad news, I was so relieved that I felt full of energy : I approached 4 or 5 groups and made good jokes, a girl has played hide and seek with me, it was funny but I lost it in the club because I was high and I forgot what she looked like in the meantime. Arnaud suddenly disappeared.

At 4am, Hafid wanted to go back home but I wanted to save the honor so I told him that we would persevere. I spotted the last group of chicks available on the dancefloor, the tallest had just been approached by a lambda dude and danced with, so her friend was alone « it is not cool,  dancing alone. » She instantly made ​​me the dance of the ass on cock and I became hard… don’t ask me why but I probably was still turned on by the nurses I saw Wednesday night. I then kissed her neck and she turned, facing me. Kiss. Shortly after, she left and I didn’t think about taking her FB : she was such a bad kisser… well, I mean it is subjective, but we had no synchrony.

Morality :
– Taking a cloakroom at 1 € 50 is better than risking  to lose €300 of clothes and an anxiety attack;
– Persevering until the last second to successfully pickup girls, even when you’re not in a good night and you missed easy opportunities.

In any case, it was really a good night, we had a lot of fun. Anyway, I think I have the backlash of my year of pickup. Soft shot if you want to know (well, not everywhere when you know what to do)… But yeah, I slept with more than 2 girls per month on average so now I rest on my laurels like Julius Caesar and I even doggystyled my Cleopatra. Btw, if she reads me one day, I want her to come to my place or I go to her place and without a word I will do everything she wants. I want to be her toy boy delivered in 20 minutes. I want to be her knight who will make her succeed in her quest (she looks for pleasure)… What?! It is better than a party with a vibrator and your best friend, right? Well, I leave, the space-cake I have just swallowed is driving me crazy.

previousWhat happens during a medical party in Marseille ?
nextKiss and see you next year