For or against girls who are rebuilt ? 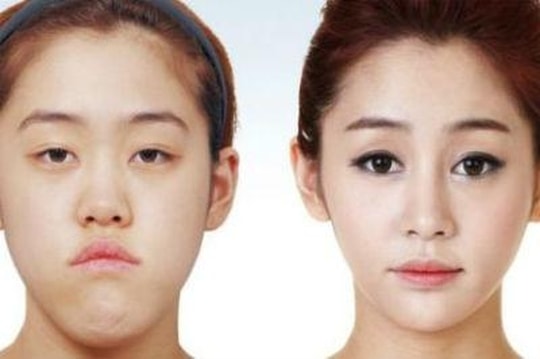 What is your view on girls who are rebuilt? You did not ask me but I’ll give you mine. We will speak of purely cosmetic surgery here, not of reconstructive surgery.

When a hot girl is rebuilt to be even hotter

There was a girl in my class who was really pretty. Really thin, she had breasts that went with it. But almost all the guys of the chest were on her because she had a beautiful face, was always well dressed, and because her ass was nice.

Despite that, she came to be complexed while she was hot. It is crazy!

In fact, according to what they have, humans tend to want more and more. She compared herself with the images retouched of women (the type with what girls are watered by fashion magazines). While other girls compared with her, my friend.

This comparison had created complex where common mortals (including me) find that tit is nonsense. She even felt ill at ease at the beach while she was surely one of the prettier every time.

She eventually cracked and got biggest tits. I guess she changed a 90A for a 90C. She had told me exactly but I forgot (this is not very important).

It is sure that the result was beautiful. But it is a fake, that’s the thing that bothers me. The operation had no genetic consequence so her children will inherit her original genes not her new breasts. Thus, a potential progenitor could feel like she cheats on merchandise. Then, I know plenty who fantasize about big fake boobs, it takes all kinds to make a world go around!

The good side of the case is if she felt better about herself after. Anyway, honestly, it was really an obsession so I do not doubt the fact that she will do it again later about another part of her anatomy. This kind of problem is more in the head than in the body. This way of thinking is a bit of a vicious circle and, in general, when you put the slippery slope you tend not to get out (it can become an addiction). “Yeah, now that I have perfect breasts. Why not getting perfect ears, mine are a little bit prominent?”

In addition, few people necessarily think of it, but it can create complex among the other girls (there is a genetic competition among chicks): “Yeah she’s beautiful but she has small breasts while I have nice tits” they could say before the operation. Now, they can just cry and think that there is no justice in life!

This is actually a business. To show off and enrich Nip Tuck’s surgeons ! An operation of this type costs about € 5,000 and prosthesis must be changed every 10 years. Moreover, it leaves scars on the body. You really have to weigh the pros and cons before going in there: is it a fad or a real need?

And if it was just a story of perfectionism and money … But no, it is primarily a health story! There have been plenty of cases where implants become infected and where the chicks were left without breast in the end. The best is the enemy of the good. I can take away from my mind these images of stars who were rebuilt (this is somewhat a standard in this environment) but who are uglier after than before. And of those who are rebuilt but that with age the result becomes frightening.

So much the better if it allows some women to feel better about themselves. I do not blame them because it is not their fault if the society makes them slaves of their image. But I still think it’s a pity… especially that there are risks. Choosing the easy way out often implies serious counterparties.

It is like if I had asked a doctor to rebuild my nose to be more beautiful or like if I had taken growth hormones to be tall. No, I worked on myself to succeed with what life has given me. Respecting the rules of nature.

The only case in which I support this kind of operation is when the girl is complexed but that there is a real reason. In the case of my friend, she was already beautiful and nature had a bit balanced things compared to other chicks by equipping her with small breasts. She gave a great importance, this was surely the drama of her life, but I do not think there was enough actually.

After it’s just a matter of opinion and everyone does what he wants! Anyway, besides that, I saw a story about a girl who did not have a nose but a toucan beak. The surgeon had given her a “normal” nose right and it changed the whole life of the girl. Because except that, she was not bad.

It is true that it must be boring to be mocked all the time. Or feeling that something of our anatomy makes people uncomfortable. It’s always the same problem of inheritance of genes but in this case I would say that the girl has done well to have surgery. Because it does not reflect a psychological disorder but a real problem of well-being due to a physical characteristic.

Anecdotally, I heard another story like this: a girl who had a big filthy big nose had surgery. Until there then it’s cool. But in addition, she was able to be reimbursed by social security, saying that her big nose prevented her from seeing well. There’s no morality. I just found funny to tell you this story.

When a very ugly girl gets too much surgery

Reminds me of a story I read. Jian Fengun, a Chinese had been seduced by the beauty of his wife. So he asked for her hand in marriage, and quickly decided to start a family with her. After the birth of a first ugly girl, the husband wondered if his wife had not been unfaithful because he considered himself “not bad”.

He requested a paternity test which proved positive. After three ugly children and strong pressure from the husband, his wife confessed to having suffered for €80,000 of plastic surgery before meeting him. The genes do not lie… the mother was very ugly before.

The husband filed a complaint against his wife and won his case: he was deceived and she paid him nearly €10,000 in compensation. I’m not here to discuss the verdict but to advise women who were rebuilt to tell their husbands. Anyway, those who do that are not legitimate to complain about guys who psychologically manipulate because they are the female equivalent.

A nose or a chest, finally, why not … but then being entirely rebuilt to look like a model (or someone else) : it’s crazy! It’s a fucking drift ! Too much playing with fire isn’t a good idea.

May the God of the Game help us to live with our imperfections! But who decides what is an imperfection ?

And don’t forget, you cannot go back unscathed after.

previousBelieving is seeing or seeing is believing ?
nextFind out the new hybrid openers !