Friendzone and friendship between men and women 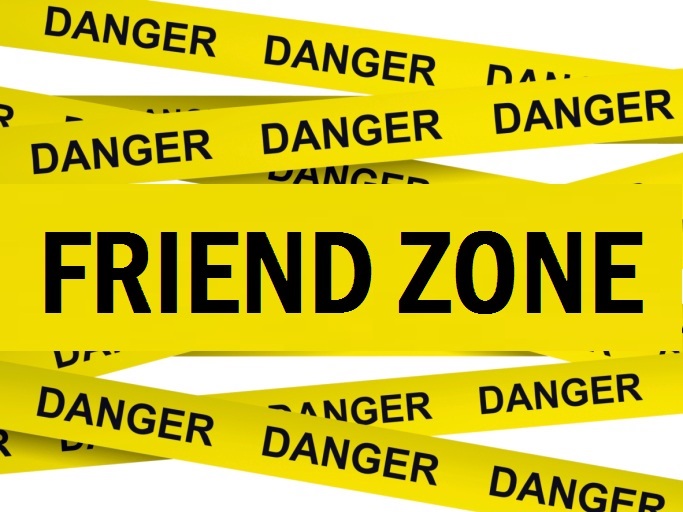 The Friendzone (“Friendship Zone”) refers to a social situation where a person wishes to have sex with someone who wishes to maintain a friendly relationship.

The subject is complex, but concerns many a little bit shy young men. Moreover, according to some psychologists, men are more likely to experience Friendzone situations in the context of a relationship with a woman: they tend to be more easily attracted by their friends than women by their friends, and would also tend to overestimate the desire of women to have a romantic or sexual relationship with them.

2/ Is it really a friendship?

The Friendzone has, contrary to what its name indicates, not much to do with friendship. Friendship is a word too strong for what we’re talking about here. Besides, there is something pejorative in this term… this becomes evident when someone asks “is he your boyfriend?”And the girl answers” no, JUST a friend.”

When a woman decides to say “I prefer that we remain friends,” she rarely really wants you as a friend: she usually tells you that because it prevents her from being too nasty to you. From there, you enter what is traditionally called the forced Friendzone. In many cases, however, your target will move away from you very quickly after that… If this is what happens, you will not stay in the Friendzone: soon you will find yourself… nowhere (that is cruel, but it’s like that).

But there are times when your target will not leave, and where you can keep in touch with her for months and months. But that’s not friendship either. It is a relationship where a girl tells you that you’re great, you’re an amazing boy, she does not understand why you do not have a girlfriend but paradoxically she tells you about guys she fucks, calling you when she needs help but does not make much effort for you…

In fact, in both cases, you are less than a friend: rather an acquaintance, a mixture completely asexual of friend, confidant and Teletubby. Or maybe it is an unilateral friendship and if you accept it in the hope of one day dating the girl… you’re a sucker!

3/ The FZ in an evolutionary perspective

Women build relationships with members of their social circle for a whole lot of other reasons than having sex : being with the most popular, being with guys who will ensure their safety, being with people who’ll introduce them to other people, etc…

If you are one of the leaders of the tribe, with a number of features making you an attractive man, they certainly will make out with you. Only sometimes, a man may not be at all attractive but can offer a whole bunch of advantages. For a woman, it is then not very interesting to make out with, but it is very interesting to have him in her social circle. They want to have the cake and eat it too?

Since such a man is in her social circle, but is not her partner, then he can only be a “friend.” Moreover, this word means that it is the duty of the man to have nice touches to her. But these men are not their friends. They are resource providers (or people they are obliged to see) for who they have no real consideration but they keep to her “in case”.

In general, we find ourselves in Friendzone with a girl because we too much acted like an “innocent” friend and not enough as a potential lover, we missed the opportunities to concretize or we had a lack of charm and charisma…

Many women tend to strictly categorize their relations: either one is as potential friend, or a potential lover. It’s very rare that a man trades a label against another in the eyes of a woman. Or, if they have never seen in the new guy a potential lover, he’ll probably never become one.

There is also the scenario of the man who timidly tries to make a girl understand his intentions, girl who makes the ostrich by ease.

Although the girl liked us, if we tried nothing but continued to revolve around her, then it is too late because doing nothing is doing something… “nothing.” And when we don’t dare to show our balls, we lose value in the eyes of women. In addition, for a girl, a guy who is in love with her but with who SHE is not love, or she is not attracted to : it’s because this is a guy who failed to be attractive. So, finally, can we say that the FZ is the destination of the guys who do not have enough value for women to sleep with them?

To exit the Friendzone, there’s not 36000 solutions. There is only one and yet the method is not foolproof: take her hand and place it on your balls! Just kidding…

First, forget the love letters, declarations of love and more or less subtle remarks on what you feel for her… first, because you are 12 years old anymore, and above all, because this creates discomfort. However, the discomfort is the mortal enemy of the guy who wants to get along well with a girl.

Even if they say they like honesty, if you are really in the FZ, you’ll need a good game! Be aware that you are going into a minefield, and if you rush things, or lack of subtlety, your relationship with this girl may be tender or ended.

Please see this girl as “a long-term project,” and until things are unlocked, pick up other girls to practice and become alpha. Becoming obsessed with this girl and falling in love with her would be the worst strategies that would make you more pathetic than anything else in her eyes. Show her that you are a normal guy, who knows how to meet new people, have pleasant relations with them, etc. And above all, stop being her shrink, at least not before having fucker her.

We must transform the “friendship” in sexual attraction. But to me, it is simply better to never fall into the FZ, to never accept such a frame… it will save you from having to try to get out.

Because anymore, if you are in the Friendzone while from the start, you want the girl, you have allowed this situation to exist by not immediately having imposed yourself as a potential lover, so you have screwed up by letting the relationship evolve into something you did not want. It is your responsibility to assume more, be more frank, to do not give false hope of friendships to girls!

If you met this girl when you were already a couple, she probably did not even categorized you. And you presented yourself as a guy who is capable of having a relationship with a woman. Since you are single, do not let her store you in the category of “just friends.”

I have long been a subscriber of the FZ, I fantasized about my friends, I was a friend of ladies… but now I will not fall in the FZ any more. All my relationships with girls I can potentially interested are sexualized early on.

Here are my tips to avoid falling into the FZ:
– She must be aware that you are a guy with cravings and desires that go with it. Be clear about your intentions, “I’m a man and I want you.”
– Be uncompromising when it comes to the frame of the relationship. Do not accept not assumed frames. If you accept something you do not want is that you do not respect yourself. This is probably because you have not enough targets or do not master the game. Sometimes I put the chicks back to the wall, I take them out of their comfort for sleeping with quickly… but anytime I’m ready to lose the girl to win her.
– Jealousy: she must be remembered that other girls like you, and that you like other girls.
– You must have a sexual behavior: a lot of guys go to gym, dress very well or grow beards and have a sexual appearance… but this is not enough! It is not even necessary: I do not have the physical appearance of a model and yet I fuck more than many of them.
– Do not remove the sexual tension by being too nervous, too shy, too embarrassed or too respectful.
– It is very important to use sexualization (I’ll have to make a detailed article about it): dare to touch her, dare intense eye contact, innuendo, (nice) teasing… bother her gently for reaction. Thus, she will not be bored with you and will feel that you are interested in her as a person. Do not they say “that tough love”?

5/ Friendship between men and women

The concept of the FZ was considered misogynistic by some feminist groups who think it underlies the need for women to have sex for having the consideration of men.

In fact, a friendship between a man and a woman can indeed exist, if the man and the woman each experience a feeling of shared friendship. However, it can not exist when one of them feels attraction or romantic feelings for the other one.

Personally, I agree to be friends with a woman if I had sex with her. Because after I’ll no longer desire her in secret and I’ll know she respects me enough to confide her body. Note that I do not become friends with all the women I sleep with…

I agree to be friends with a woman without having slept with if she does not attract me at all but is sympathetic. In this case, it’s up to the girl to decide if she wants to be friends with a guy who does not like her. It may be a good thing to FZ a girl, for example to access her social circle and her friends. My many stays into a Friendzone also probably contributed to my understanding of the fair sex.

The conclusion: I do not accept a relationship that frustrates me just to please a girl. In fact the FZ it’s just when one of the protagonists would like more but submits to the frustrating will of the another one for fear of being rejected.

A downside to finish: the FZ it is sometimes natural, not intentional! You should not always see bad intentions when it comes to FZ…