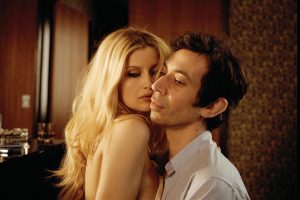 All that has been said so far implies that what turns on every woman “100% woman” is determined by genetics.

The game has therefore applied to understand all this and to use evolutionary psychology to teach us what levers make respond women “programmed” as women.

However, as we have seen, some seek female characteristics in men. Just as some guys will be reassured by manly characteristics in a woman. Psychology and placement on the scale from “100% woman” to “100% man” will bring individual nuances in our analysis. But on average, men have more success by adopting a rather manly behavior and women by adopting a feminine behavior. It seems logical but many people have not yet integrated it (or have forgotten because of “feminism”)!

In summary, according to Evopsy, women are genetically programmed to look for men who have the best genes and which can ensure the survival of their offspring (strength, resources…) As for men, they look for women offering a good genetic resume for their offspring (beauty, health…)

Through a study of evolutionary psychology, we can get to reproduce the attractive attitudes and avoid those that communicate we’re not an attractive candidate.

A man with good attitudes also becomes as attractive to women as a girl who is a pure hottie would be attractive to us. She will as quickly as possible make a sorting out “pussies” with whom she will have a purely friendly relationship, and serious candidates for sex. This is natural and cannot be controlled! It is useless to blame her for that…

Just like it is useless to be mad to a man who does not wants to fuck a big sausage. This chick may be very nice but evolution does not care. It is uncompromising, contrary to what the Hollywood movies would like to make us believe.

We almost all have a potential to turn on girls because it is more a psychological than a physical matter. Culture and society blur their instinct (thanks you Walt Disney …) so the girls may not even consciously know what really pleases them in fact. That’s why it is not a good idea to ask a friend with whom it is platonic to tell you how to seduce. No more than it is advisable to read women’s magazines.

We’ve listed some characteristics that can make someone desirable (there are many others in the rest of the book). That said, people of the opposite sex will always have personal preferences out of our scope of influence.

For example, each woman has her own hierarchy of qualities she looks for in a man (e.g. social position > Confidence > beautiful physical appearance).

And even within this hierarchy, there are different hierarchies: the server of the hype club can be an alpha in the eyes of girls who give value to clubbing. He would be nothing for the girl who does not go in that club and does not care about people who drink alcool listening to electro. The drugged will like a dealer or a rich guy who will pay her some powder. The sportive woman will like her ski instructor or yoga teacher, etc.

Most people know from adolescence where they stand in the hierarchy of reproduction: just a few trials during adolescence are enough to find it and then targeting at this level. It leaves traces!

Personally, I did not have much success when I was young and now I still wonder how I got there. You can climb in the hierarchy of reproduction but you will have to fight (do not take it too literally) against yourself and against others.

This is what is called inter-sexual selection, which corresponds to variable selection criteria from one person to another in the eyes of the opposite sex. Another example: a woman can give more importance in selecting certain attributes such as leadership, a tall man, his eye color, his impudence… While another may prefer the quality of speech, humor… the girl’s education level can also influence the hierarchy of her preferences!

Finally, there are issues of perspective that comes into play: a politician like François Hollande is a dominant in Paris but if one day he finds himself lost in the jungle, he would be nothing in the eyes of a savage girl.

I hope you have better understood why seduction is such a delicate area, hard to study (many variables), and why the game works through the logic of large numbers (most women are programmed to love Men).

Bugs in the programming

Sexual selection started a long time ago and happened on the very long term: our brain has been optimized for a world that no longer…

Read More »Bugs in the programming