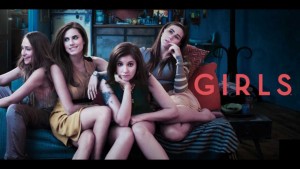 Girls is an American TV show that tells the lives in New York of a group of friends who are in their twenties. Their main perspective is the economic and moral crisis of the Western world. They are living in a time that is both hard and free (sexuality, friendship, unability to succeed in life). We follow their sentimental, sexual, at work and in family galleys. It’s like Sex & The City but younger. The first episode even talks about it, that is to say!

This is typically a “series for chicks.” The kind that I watch sometimes (when it’s not too namby-pamby) to better understand women.

The four main characters are (a team of little-known but credible actresses):
– Hannah Horvath, a young writer in her twenties who trainee and living in Greenpoint, Brooklyn, whose parents have pulled the plug. She is a little ill at ease.
– Marnie Michaels, the roommate and best friend of Hannah. She is serious and responsible. If not tight-ass but sexy, bitchy and ambitious.
– Jessa Johansson, English cousin and roommate of Shoshanna. Bohemian and unpredictable adventurer. She’s a little hippie and former drug addict.
– Shoshanna Shapiro, naive and bubbly cousin of Jessa.

Personally, I like Marnie and Jessa. That’s my kind of chicks. Shoshanna is kinda hot but her eyes are weird, they make me uncomfortable. And Hannah’s too damn fat: even if she is friendly, it does not compensate.

In terms of guys I like two :
– Adam Sackler, who has a relationship with Hannah. He is a completely crazy actor.
– Jonathan Booth, a kind of sex maniac and full of himself artist.

Girls has a raw side, both in tone and in aesthetics. Forget the sex scenes that give you the impression that the actors have smooth skin like latex: the beads are not erased, the dialogues seem to come straight out of your most embarrassing memories, the sound environment is respected; in short, it is rather realist than glamor. Discussed themes are also quite realistic (and it helps to have the point of views of chicks on these subjects) : fuckfriend-who-is-not-totally-just-a-fuckfriend who treat you like a sex toy a little boring, sexual compatibility problems, lifestyle choices disputed by relatives, looking for work, abortion, or the “late” virginity…

The least realistic thing for me in this series is that the exhibitionist fat and too talkative Hannah fucks handsome guys. Tall guys, hot guys, etc.

The first season is quite refreshing and funny (the next ones I less liked them). I managed to identify with many situations, it was fun. And I like when the main character is a writer.

It must be said that there are not many American series that address my age group (26 years), they prefer to stage teens or young thirties. There, the actresses are done with college, and like many of their peers are midwater, single but not really, in search of a stable job, freshly abandoned – financially – by mom and dad … a youth that “tries to become what it is” hit hard by the crisis but still able to dream.

I leave you now with a very alpha scene from episode 3 of season 1 in which one can really smell the sexual tension. The guy (Jonathan Booth) has a good body language, does it straightforward style as I like with an incredible confidence (well it’s coming to him because he is an artist but who cares). He reminds me of Chuck Bass: he very well knows how to manage the sexual tension.

It makes me think of chicks that we have cold-approached with a very direct game in bars and who resisted “for the principle” : maybe they came back home and masturbated, remembering the party. What is unfortunate is that we could have done it for them for real.

If you decide to watch the season one, know that I like Adam too. He is so casual I just see myself in him. But he is totally fucked up and way more weird than me anyway. This is not to say that he is a PUA or anything of this nature, but he’s still exciting for women thanks to his side “I don’t give a shit” and “I am obsessed by sex” and he is daily uninhibited. With him, you can never be at the heart of inaction.

Frankly, we could make a TV show like that in France, that would be cool. I am willing to write the script.

previousCan seduction be taught?
nextHow to show to a woman her own contradictions