Henriette is not your real first name all the same? 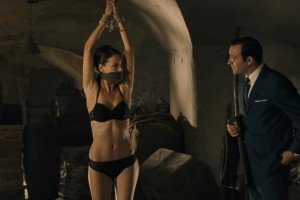 Yeahhh today, I finally had an interview for an internship in Aix !!!!! But it was a false enjoyment : it was fucked up by advance… shitty offices, shitty test of hiring (I am better at debauchery), fat and ugly boss… I don’t imagine myself getting up every morning during three months to be exploited by him. Then, when he started to lecture me about my « too much relaxed with regard to the stake » attitude and my « uncalled-for humor » ; I advised him to go in for sport, to take his shirt out of his trousers and to stop farting higher than his ass. He was a big idiot, he deserved it. With a diploma or not, he is a big shit. It was the anger of the day, fuck. I prefer talking about more constructive adventures.

Yesterday evening, we were with some buddies of my faculty at rue de la Verrerie (normal it was on Thursday), where there was a bar full of strange people before. In brief, we drank, et glou et glou et glou, Then I saw a group of Gothic. Being dressed with a black T-shirt and a black leather jacket as well as a dark pants, I said to myself that I had a chance with the girl of the group who was moreover the only drinkable one (it means that one can drink her cyprine), Others had too much tattoos and piercings everywhere. And me, there is only one single hole which interests me.

I approached her like I approached all the girls that night : « Hello, Hubert De La Bath.
– Nice to meet you, Henriette.
– You have a first name come from the prehistory. Well, it seems that I am a good kisser.
– It seems that me too.
– Cool !!!
– ;)
– But tell me, Henriette is not your real first name all the same? It’s fucked up… » she answered that she was in fact called Océane. I offered her my hand then maintained the contact by looking at her from underneath, with a little tilted head. I caressed her palms casually, with my thumb.

For those who wonder, yeah I would have liked being rejected too, so I would have been able to use this fucking answer I learned from OSS117 : « What ? You do not like men ? »

We chatted a long moment. « Let’s go to a quite place to… talk ? » A group had gone out of the building against which we were, and I had surreptitiously prevented the door from closing ; in the hall of this old stone building, there was a sort of lounge of the XIXth century (I’m just kidding IDK anything about decoration) and a big sofa on which we sat down. We chatted another moment of everything and nothing whereas my hands took more and more initiatives « oups ». And there, I kissed her, she said to me that it was what she waited. I answered «I know, but that was fun keeping you waiting …
– Cocky ?
– Too much. »

While kissing her, I put my two hands under her T-shirt and I suddenly felt her fingers in my boxer shorts. These Gothic, I swear you, so naughty ! I can’t give you all the details because I’m waiting for my bros for an apéritif then I write it quickly but, roughly, it is like that that I fucked a Gothic into the hall of a building during an evening when I was a little bit drunk (what a change). Now that I think of it, it was crazy over the moment, I said to myself… If it is a dream plz do not wake me up… Let’s see how far she is going to dare to go at least it is not me who am going to chicken out me the first one (especially because I was very hard everywhere). Seriously, I am satisfied to be a little crazy, and to be lucky (or to make my luck), it is what allows me to live incredible adventures like that… We never saw again each other, she then went finding her friends and me too ; after we went to a club and my buddies just kissed a girl not like Katy Perry (both the same one, in addition).

You probably noticed that I did not describe physically my conquest. Indeed, I would have been able to say to you « she was tall, sexy and I always wanted to bang a Gothic » but I am especially satisfied by the third point. Their mystic side turns me on. This one was fucking shameless, exactly what I needed !

One last advice (then I leave), if your friends say to you that your chick or the one that you just fucked is less hot than what you think, you… Do not pay too much attention, or when you penetrated into her or kissed her, a link builds up itself, making her more pleasant for you; it is the main part. Or then it is your friends who try to console of not having been chosen: « It is not so grave, anyway she was… fat, too thin… she had yellow teeth, etc. »

previousA symmetry in the French kisses is something important
nextPerdition parties