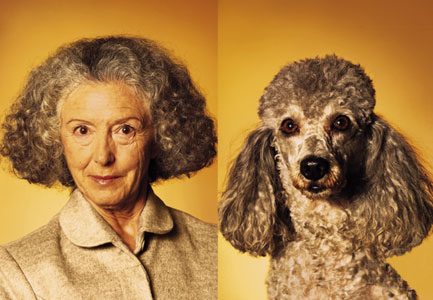 Do we 100% choose the girl with whom we wake up every morning, or the girl we left when the sacrosanct puree was expelled? I mean, from beginning to end, was I the real decision-maker of this relationship? Is she my girlfriend, my wife, or my one night stands because I chose her among ALL the others?

You will think (unless you are a victim of a vodka-martini-GHB (don’t laugh, it can happen to you) or an arranged wedding (I do not hope so, I have to stop putting parentheses in parentheses because it becomes complicated to follow) YES, you approached her because she seemed hot to you, you seduced her, and you honored her in your king size bed. And that was your decision.

In fact it was. The only drawback here is that some of you have chosen it, but among a panel of restricted women. If all the options are not available, can we then talk about a real choice? What I’m going to talk about here is homogamy.

Homogamy is, in addition to one more very complicated word in your flowery vocabulary, a concept that roughly tells us that we are looking for a partner that socially looks like us. Often in spite of ourselves, because we do not think of looking elsewhere. We can also talk about phenotypic homogamy (big ones get married with big ones, dwarves with dwarfs, blond ones with blondes) but I find this story of who looks alike physically assembled a little bad, and not frankly interesting . So I will deal only with social homogamy.

Before, people married by necessity, to exchange land or titles, money or privileges, no need to be a great specialist in history to know it, a simple reading of Moliere and you will show it: before, we did not decide. “Marriage puts everyone in his order,” La Bruyere observed. The concept of love marriage dates a priori (I do not fount it in my hat, but in a study report of a sociology student) from the nineteenth century, during which a form of romantic literature was born. The mentalities changed, the regimes also, new freedoms appeared and the notion of love thunderbolt reappeared (it existed in the courtly literature, everyone heard about Tristan and Iseut, but it was not hidden it ended badly. 300 years later, the entire planet undergoes the films with Julia Roberts). Out of fairy tales, we start talking about encounters due to fate or at random, Mr. Martin can now ask Madame Dupont in marriage because he finds her to his taste, without having a knife under his throat. Today, we can even sign up and shop on Adopteunmec and the concept of a one-night stand is admitted.

In reality, and even if one has to be wary of the figures, some statistical studies reveal certain possible combinations between certain individuals. It is unlikely that an actor will frequent a La Poste employee ; In contrast to this possibility, we realize that the majority of the actors make out with… actresses, or at least people working in the showbizz. To notice and understand this phenomenon is to realize that there is very little room left for coincidence, chance or destiny during an encounter. What La Bruyere noticed is always true, except for women of great beauty, just like in his time certain favorites.

At the moment of seduction, men and women defend their social interests. Specific feminine “capital” still relies, whatever may be said of it, on physics and character, when male capital is more based on social excellence. It is partly for this reason that the men of power or the fortunate are always accompanied by, if I may say so, real hot babes. It is on this theory of “capitals” that a few techniques well known in seduction are based, such as demonstrations of high value to increase your social capital, “negs” to bring down the one of the chick … When “Capitals” are equal, heterogamy is possible. He is rich and poor? If her breasts are firm and her smile is Colgate, it works.

If this vision seems a little too dogmatic (and it is true that I tend to simplify matters a little), it is nevertheless verifiable in everyday life. This theory explains why a very intelligent man seduces (social excellence) when a woman with this quality does not attract so much (the intellect is not a criterion of reference for us guys, yeah). Note: Couples including two protagonists with too many capital often break under social pressure.

The choice of a similar one is also explained by a proximity of the contexts (schools, neighborhoods, bars) where the probability of meeting someone of his social group is high. A student will go out first of all in a bar full of students, a question of coherence, he wants to meet a population that belongs to his reality, people whose value will be close to his own. An officer will choose rather lounges or bars with a more “lounge” atmosphere, frequented by executives. Foreigners on vacation, expatriates and Erasmus students all tend to go to places where they are likely to meet people from their countries. It is this small community side that leads to the opening of French or Irish pubs abroad. The proof of this phenomenon of regroupment is that you know that to fuck some MILFs, you will have to go to such a bar, and that to fuck some Scandinavian student, it will be rather in another one…

Intermediate and higher professions tend to meet at their places of study or work. I am talking here of lawyers, teachers, managers, salesmen. As for the employees or the workers, they seem to find love in more public places (supermarket, park, ball…) Attention, these are only general trends. In cold countries or rainy regions, people spend a lot of nights in apartments with friends, although this phenomenon is less pronounced in France than elsewhere, and it is generally in this kind of receptions that it’s easy to make out with chicks. How many couples say when asked how they met: “Oh it’s a common friend who blablablabla…”? A lot. Here again, homogamy there will be, since the majority of your friends belong to your social class.

Nothing absolute in what follows. There are (as always in seduction) counter-examples, I’m just writing about generalities. Do you think the riff-raff of Marseille are having sex? Yeah, they’re banging girls. Except that they are making out with chicks that are part of their realities, chicks who like vulgar men in Lacoste sweat suit. From the moment the social/cultural differences are too marked, it is for the cock a real barrier not so permeable posed on the vagina. These are just chicks who do not live in the same reality: try a Lacoste and they will start to consider you, it is not jokes. For thoses bitches from Marseille, if you do not wear TN and a jog, it is dead. It’s not the same world, that’s all. I guess you also do not want to spend a lot of time and energy for this kind of girls…

So either you change your dress style and enter their world, or you change your targets. It’s life. What I am trying to say there is that your appearance and lifestyle determine what type of chick you are going to fuck. This is a point that some guys do not take into account. Those who are more in the Gothic style will fuck hotties, but hotties with Gothic style too. Sometimes I have the impression that some people want to fuck girls who have nothing to do with them, if some make out with models it’s because they have the style (and the way of life too) that goes with it, got it? And that’s stuff that you and you alone have influence on. You have to be aware of who you are and what you want to increase your chances of reaching your goal.

Having some style and being a little class is not complicated, simple details make the difference. A dress style too different places you in her eyes right away in a different social class. After what you have just read, you understand why showing a social difference will not help you… I defuse in advance the guys who will answer me that one can pick up by wearing a fluorescent green shorts and a pink shirt, that they have already done with girls by going out of training and so in a jog, yes and me too, but nothing is absolute, we just try here to improve and correct ourselves to optimize our chances. So optimize yours so as not to be a Jean-Claude Dusse.

Individuals tend to assemble according to their social resemblances. Both man and woman strive during the seduction phase, to spread out their social capital, if capitals correspond totally or nearly, it greatly increases the chances of establishing a relationship. Show the highest possible capital !

Having a capital too high will not stop you from seducing a girl to capital a little lower, but the reverse is not true. Or in any case, the opposite is more complicated. Varying the hunting locations allows to meet a wide range of girls (not the girls, the range), stay open to the possibility of an interesting encounter anytime and anywhere, no matter the place or moment, your future sexfriend can hide where you least expect it. Doing street pick up is also one of the best ways to meet girls from all walks of life.

Once upon a time there was a young Padawan who had practiced almost this language: “Yes, I do get bored practicing street pick up and I do not know what, I only sleep with the girls in my social circle” The fact that the street is nothing boring, sticking to this kind of behavior makes him pass by a multitude of great girls.

Increase your capital by personal development, by having a pleasing or at least correct dress style, being physically (and mentally) in shape, being passionate and cultivated. In other words, if you cannot be The Alpha, do not be a lambda: place yourself above the mass to broaden your field of vision and therefore your choices in women’s matters. Having the choice in the girls that will potentially share your life, that’s the thing. And note that all women are not good to be seduced.

Extract from : Communication, seduction and manipulation