How and why to sexualise ? 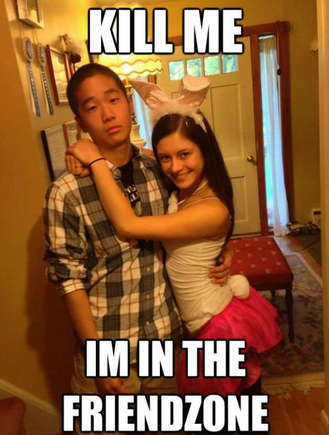 Many are unhappy and disrupted by questions like “Does she like me? Is there some way with her? Why doesn’t she suck my cock greedily?”

They are people who are going to torture themselves by looking for hidden meanings in what women say. “Did she want to get a message across when talking about her last relationship?”; “What the hell does she find to this guy she often talks about? Are they together?”; “What did she mean when she said I was cute? “

Many boys, facing those questions, took their courage in their hands and asked the elected of their heart “wanna make out with me?” They then received as an answer: “No. I prefer that we stay just friends.”

It has broken them.

In Les particules élémentaires, Houellebecq tells the story of a guy who did not dare to kiss the most beautiful girl of his class, while he hung out with her all the time. He liked the girl very much, and it seemed mutual. But one day the damsel got tired of his inaction and they lost touch. Throughout his life, the character wondered what would have happened if he had dared to try something. This traumatic experience has affected his whole life and was followed by a shitty love life. This sentence of the book struck me: “When I was seventeen I never imagined that life is so short, possibilities so brief.”

It reminds me a dirty experience I myself have lived… a long time ago, in a galaxy far, far away.

I poked a girl on Facebook and it turned out that we had a friend in common. We have long talked online (I thought we were flirting), then we met at a party, in the presence of the common friend (that I would have gladly fucked too).

After that night, she continued to talk to me on the chat, so I figured she was interested and have proposed to meet again: she invited me to the carnival, an afternoon with her friends. Then we saw each other in a platonic way.

But a blessed night, I had invited her to a party I had organized to celebrate I-don’t-remember-what and we went clubbing. On the dance floor, she stuck her ass against my cock, moving it with the music. I tried to say something in her ear but she stepped back making large gestures and shouting “NO”. She thought that I had tried to kiss her.

One hour later, she kissed enthusiastically a guy I did not know but one of my friends had brought to the party. Our common friend also kissed a stranger on the dance floor. Seeing this, and not having the ability to find a girl, I was pissed off and got back to my place, grumbling like a bastard.

But the two girls had to sleep at my place because they lived outside of the city. Then, about 5pm, they rang the doorbell, hopeful. I did not open and told them to go fuck themselves. That day, I decided I had to master the game to no longer live so bad adventures. That day, I reconciled with my balls.

Motivated by rage of humiliation, I started my (re)build myself. Two years later, I saw this bitch in a bar. She was with her boyfriend, a guy with no apparent virility. I used our old “friendship” to isolate and told her shit for an hour before french kissing her, she was surprised. But made no downward movement.

After that, I went to tell her guy what we just did and I left. Yeah, it wasn’t a good idea to piss me off!

All that to say that being a friend of women, this is crap. I know how it can make a man suffer. That is why I am writing this ebook today: I want to help men who are in this hard situation.

Friendzone and lack of sexualization

The term “Friendzone” gradually became a name, sometimes declined in verb. The concept even has its own Wikipedia page. This encyclopedia says it is a “social situation where a person wants to have a romantic or sexual relationship with another person who wishes to maintain a friendly relationship.”

Except in real life, the situation is a bit more complex than that.

Some see it as “a way of describing this difficult time when you realize that the person you like is absolutely not interested.”

For others, it is an admission of the failure of a man who allegedly tried to seduce a woman or to have sex with her.

Women are tempted to see in it a “means used by men to justify their sense of entitlement over women. They imagine that if they are nice with a woman, women are obliged to show a certain interest to them.”

Some suggest that this term implies a sense of victimization and injustice and is « full of aggression and resentment. [That] it is often used to say “she hurt me and unjustly rejected me.” »

Men therefore associate this term to failure and disillusionment. Women to animosity and antagonism.

When guys talk about their experiences, all evoke a more or less a similar sense of disappointment that I experienced in the story I just told you. However, not all react constructively.

One of the men confessed on the Internet that he knew the girl had a boyfriend, but he continued to hang out with her because she was “very pretty and he had no respect for himself”. One night, he said it was time to play cards on the table and confessed his feelings. The girl then told him she was flattered, but she did not had this kind of sentiment for him. “She still invited me to her place. We slept in the same bed, but nothing happened. When I think back on this night, I want to yell at my old me : Go home! Respect Yourself, a little bit!”

As for women, they tell some experiences that roughly follow the pattern described: friends with a man until the day he admits feeling an attraction to them – often without warning (the guy yet probably thought he had sexualized). And when they express their refusal to go further, the situation is getting worse: their friend often gets angry against them for sending conflicting signals or says he never wants to see them again.

Interesting : A bisexual told me she often had had Friendzone experiences with her straight friends, but never with her lesbians and bisexuals friends. A gay friend also proudly told me that he had never been Friendzoned : “All my gay friends are my ex.”

Almost all the people I’ve talked to believe, however, that the male-female friendship can exist. But then, how do we fall into the Friendzone?

This is the consequence of a lack of sexualization. To have an affair with a woman, she must want you physically. She must have a sexual attraction for you. And it does not depends on your physical appearance ! No need to be a very tanned and muscular model to seduce a woman. On the other hand, your behavior and attitudes are critical (the fact you’re ready to do anything just for tasting her pussy is, for example, a bad mindset).

We will see in detail in this ebook how and why to sexualize. This will help my regular readers to no longer naively be relegated in the Friendzone.

previousA hot girl coming from the islands
nextIntroduction to sexualization