How to handle jealousy ? 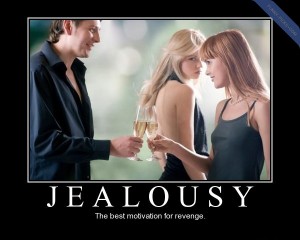 This article has been written and translated by Virginie.

Today I decided to tell you about an universal emotion: jealousy. Some say it is a proof of love, others of a lack of confidence. Some assume it totally while others are ashamed of it.

Let me be very clear: if even today this feeling exists is that it is part of the genetic inheritance of men. For evolutionists, emotions have allowed us to adapt to our environment when we were just hunter-gatherers. So jealousy has enabled us to survive and it is thus quite natural to feel it.

Let’s first see what’s the point of jealousy. An obvious answer would be “to keep an exclusive relationship with our partner.” But what’s the point of it (again)? Little hint: I spend my days crying, eating, sleeping and betwetting. You guessed it, the solution is “baby”. I develop a little… Humans are animals who need a long time to become an adult. For many years, we depend on our parents. However, remember that one purpose of life is to have descendants. It is therefore necessary to take care of these adorable baby to make sure that our genetic heritage continues to be transmitted. You’ll ask me: and jealousy in all that? And I would answer, but let me finish fuck! I will now develop the usefulness of jealousy by gender:
– For the man, jealousy prevents him from expending energy and risking his life to feed children who might not be made by him. Let’s remember that at the time developed when we the emotion of jealousy, hunting and gathering were the only means of survival.
– For the woman, jealousy assures her children will have the entirety of their father’s hunting product – will not have to share it with the children he would have had with other women. So this increases the chances of survival of the children.

In summary, it is because are our most jealous ancestors passed on their genes more than the others that this emotion is still here today.

Now that we agreed on the fact that it is normal to be jealous (to a certain extent, but I will talk about it later), let’s see how it manifests itself. Often it starts with a “flash” when we perceive a threat attacking the relationship. Most of the time, fear and anger mingle with this flash. Then there are roughly four kinds of reactions :
– Anger: the individual feels frustrated (at some extend because his/her status is reached). This can be characterized by thoughts like “who does he think he is” “He will see what I will do so!”…
– Fear: there is the fear of loss that predominates. Often this means “and what if he (she) leaves me?” “I do not control the situation!”…
– Sadness: characterized by a sense of abandonment and impairment of self-esteem, the person said, “he (she) prefers a another one, alas!” “I did not know how to keep him/her”…
– Shame: the person is, at once, ashamed to be jealous but also to be the loser. She thinks “this is an unhealthy emotion”, “I am a fool” …

Of course everyone is jealous in one way or another and it depends on lots of other criteria such as the personality of the jealous person as well as that of the partner, the nature of the rival, their education, parental models, first emotional experiences, values, commitment in the relationship (in terms of emotional dependence and hopes for the future), insecurity (is the other much more committed than me?), emotions (our ability to feel more or less strongly the emotions) and attachment.

Brief aside for those who are interested: attachment is the way, child, we bind ourselves to our parents – especially our mother. There are three main types: secure, insecure-avoidant and insecure-ambivalent. The researchers noted that the attachment that we develop in childhood continues throughout our lives in all our relationships. Of course, it is possible to remedy an insecure attachment (whatever it is) by recognizing and working on what’s wrong. If you want to know more, check out the works of Mary Ainsworth, Bowlby, Winnicott, Lorenz and Harlow (I promise, even if they are psychologists, they are easily understandable).

Moreover, making the other jealous can be useful at two levels: first, it allows you to check the price the other one pays to your relationship. But, also, remind him/her that you are always desirable by others, he/she is lucky to have you and if he/she does not make you a great present for your birthday, well it’s next! (Yes, well, OK, I’m exaggerating a little, perhaps). This is also why a guy (or a girl) not at all jealous you do not like too much in reality. The partner said that the other does not care about him (her). Because, admit that it is difficult to feel jealous of someone who leaves us totally indifferent. So moral of the story: be a little jealous sometimes, it will be good for your relationship. But be careful to don’t fall into the other extreme and become needy, clingy, etc. First, as mentioned above, it shows a lack of confidence and we cannot say that it is very appealing. And, secondly, I will discuss below, this is the best way if you want your partner to cheat on you, because feeling too imprisoned.

As I said earlier, it is quite human to be jealous. However, from a certain threshold, this behavior can become pathological. Here are the features:
– Monitoring: the jealous prevents the another one from going out without him. Spies his emails and SMS …
– Restriction of contacts: prohibition on leaving, calling and veil must be worn in case of going outside.
– Devaluation: the “victim” is held against her will in his/her role as a husband/wife and constantly receives complaints, criticism, etc.
– Possible Sanction of adultery (or a suspicion of adultery): The jealous kills his (her) partner. It is btw one of the most common male crimes. At first glance, this may seem illogical because doing so prevents the jealous from having offspring. Except that, in fact, the jealous shows to “competitors” he/she is a dominant male/female, and thus it discourages them from attempting anything in the future. The real question is why, when there is adultery, the husband kills the lover …? After all, there is nothing wrong with him. Maybe to eliminate all “traces” of adultery… The question needs to be dug.
If you are a victim of jealousy or you know someone who is, be sure to talk to a professional (psychiatrist or psychologist).

To end on something more positive, here are some tips to manage your jealousy:
– Acknowledge your jealousy, rather than denying or feeling ashamed. It is only by recognizing that you can get to manage it. Then, as explained above, it is in your genes! (But this is not a reason for inaction against it).
– Express your jealousy instead of doing everything to hide it. Indeed, doing so helps to show to the other that you care about him/her (which is a good thing when you know that some are trying to provoke jealousy of their partner – in this case it’s useless to establish a balance of power) to warn of what makes you suffer and better control yourself because in the making, you step back on the situation.
– Think about your suspicion, and not accuse the other of being the cause of everything. Two scenarios: if you are not usually but with that person you’ve become jealous, ask yourself if that person is not consciously trying to make you jealous (and in this case, flee or talk about it!). By cons, if it’s in your nature to be, ask yourself the following questions: Have I been traumatized by a previous infidelity? (If yes, your current partner can do nothing for you but you can ask yourself if you are not for something in this infidelity), do I have the feeling of not being interesting enough to keep someone ? (Self-esteem plays an important role in jealousy and if you have a sense of inferiority, talking to a therapist could help you), do I have a bad opinion of the fidelity of the opposite sex (or the same), and if so, where does it come from?
– Let the other breathe and do not fall into systematic suspicion. Imagine yourself in the shoes of the other one: how he (she) lives your suspicions, your supervision and your interdictions. In addition, preventing the other from breathing is the best way for making happen what you’re scared of!

Well, I am far from having talked about every aspect of this huge subject that is jealousy but I hope this article will help you to better understand this complex emotion (and moreover if it helps you in your daily life, it’s that a bonus!).