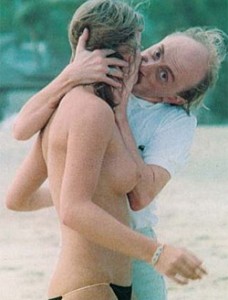 Week-end of integration of my college, it was « legendary » : I put my life on the line by making wet a Corsican, I wrote on the butt of a girl with her red lipstick and many other madnesses. But let’s take it in order chronological: the afternoon of the first day, there was games of alcohol. That is to say events of a high intensity where we drink when we lose but also (and especially) when we win. I lost, and more I was losing, more I had to drink. And more I lost again, more I had to drink again (I remember having played basketball with my sneakers (in France, we says baskets) : I threw them in the basket and everything). I thus decided to stop the massacre and to socialize with every attractive freshman… I noticed one in particular, moulded well in her black tracksuit with white bands (not to quote any brand). We went back together to the camp (the games took place below on a ground of basketball).

Then, it was the moment when we floured the freshmen and the hour of the shower. With 10 grams, I think I used all the hot water and masturbated just to spend time. Then, I went out in search of a bullshit to be made: I saw a tube and the window of a bungalow opened. So, I sent the water. The noises of a Corsican who I did not like very much resound in all the camping. Impossible to retranscribe here her words by respect for your chaste ears but in my mind, it was like « BINGO, I ANNOYED HER WELL ». A 5ft09 crazy girl went out, naked, roaring and threatening all my family. I think I made a friend… again. Well, it is the cult anecdote of our WEI.

Proud as a king because I didn’t take any slap, I then proceeded to unforeseen visits in the bungalows of the girls. After having been rejected three or four times, I found one buddy particularly willing and well turned to me whom that it did not bother to receive me only wearing string/t-shirt. So, I proposed her a game … I don’t remember what exactly but still I eventually drew a squalid thing on her butt and gave her a kiss as a signature.

Afterward, in the disorder :
– A friend came to me, saying « I share my bungalow with a couple of the prom (that I shall not name by respect) and I pretended to sleep when they began fucking. I saw everything : Claire on the top, Claire on the bottom, Gauthier in Claire’s mouth (oops, I named them). »
– I was very fond of the drawing of an enormous cock on Julien’s stomach (a drunk guy of my prom), then I asked him his FB password and he gave it to me.
– A chinese buddy was so drunk : I put him some shaving foam on the hand and indicated him that he had an imaginary fly on the face then, he spread out the foam everywhere. Picture.
– Still with this foam, I filled the slippers of I do not know who.
– Note for myself, other things which I would like to do during the next WEI: make a knot with the hair of a girl (sleepy) in the bars of a bed AND put a plastic spider on her pillow for when she will wake up.

OK. The bell rang, it was FINALLY the hour of the soup … and on my way I saw again my beauty in tracksuit. I took her arm in arm even if I didn’t know her well : « You were lucky today.
– Why ?
– Because you met me. » She laughed. And we talked like if we were drunk people, enjoying drinks. I remember having fallen from my bench because I was drunk to the gills, she helped me to held up, then I kissed her as to thank her (yes, I have the hand over the heart). We continued to eat our mouths for a while, then we went to take sustenance of more edible food.

I saw one of my friend, Pierrot, who asked me « What do you drink ?
– Yes. » Thus, I continued to eat the mouth of my cutie then the night fell and I saw my informatics teacher who observed us putting his hands on his head, like saying « this man is crazy ». Ill-at-ease in the only vision of this obese and hairy seal, I suggested to my darling going to my bungalow (very sweet). A buddy was asleep in the toilets but it was not a problem, I directly guided my princess towards my bed and told her: « Suck me ! » What she answered me in a semi-awakened voice: « Have you got a condom ? » I agreed (because I am a responsible boy) then I took her in 3-4 positions before demolishing the curtain. I swear you, I felt like a porn actor, a delight of alcoholics : I said a lot of cult quotes and she obeyed. « Turn around ! »

After a while, there were maybe 20 people in semicircle in front of the window who watched us fucking ! I tried to put back in place the curtain and everything but it was not easy: it fell again every time. She seemed to like that, maybe she  was a little bit exhibitionist. To finish, I made her a facial then I let her sleep there, drunk as she was. A buddy told me that he will upload the video on Youporn. Those are casualties of war. My buddy Pierrot arrived in the bungalow, woke her up and threw her outside with a kick on her ass. I cried, I was going to miss her. No, seriously, I think I would have slept well with her.

Instead of what, we went back hunting outside. I saw friend Pierrot kissing a 5ft91 ugliness! Argh! I encouraged him to fuck her (that is to say, I pushed him to commit an error) to be able to have fun of him but it unfortunately not happened. In the early hours after this adventure, he avoided her constantly. I love those freshmen… They are still so fresh! Except sudden reduction of Mojo, this end of year looks strong in feelings and I can doubtless conclude better that Jean-Claude Dusse with a lot of chicks. Or I can find love, I am not sure.