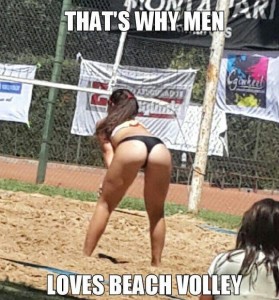 In the middle of July, Saturday evening. The coach of Marseille had invited us in a night on the beach. I was with Clémentine, a girl with whom I sleep from time to time then I didn’t tried to pick up too much. Well, had a small photographer, an ex of the Coach who was cool. The kind of not complicated girl who can look a little bit stupid because she speaks a lot and very quickly and everything but in fact she is not stupid, and it is restful a girl who cackles because at least you do not need to make a lot of efforts to feed the conversation.

In brief, I a little forgot all about her over the moment but I noticed signs of interest: when she sat down next to me, her legs touched mine and the contact did not upset her. Otherwise, I suggested her fighting with me in the mud in string, then well, she showed me her string. The small photographer was maybe attracted thanks to the phenomenon of preselection (Clémentine : what is good with Clémentine it is that it is not the kind to be jealous nor to be a pain in the neck… I think that she has the same philosophy of life as me), or then she wanted to piss off her ex (I guess that they stayed a few months together).

I let her wait until Monday noon when I sent her a message on FB. “What about this driving license?
– It is in 4 days”. I knew it but well, it was necessary to start the conversation. “How did you find me and why ?
– You suspect it.
– Yes”. After, she told me that I looked like a dead man of hunger with Clémentine, and Clem as well, and that it was obvious that we were going to fuck ; I answered “so what ? It is just nature!” She agreed with that. We spoke a lot, I sent her extracts of my book saying that the girls should have more fun, and saying that the guys should not judge them as whores. The illusion of purity and the problem of the puritanical whore haunt too much people. The society formats us. She admitted to me that I was so right, that she thought like me, and that it was a test to see if I was one of these poor guys. “Are you a psychologist or something?” she tried to guess.

As a result, we agreed to take a midnight swim when she would return of the summer camp. She left the following WE having taken her driving test and I still went on my internship. During 15 days of summer camp, we sent quite a lot of messages, she is nice, I didn’t make a lot of effort it was so to speak all the time HER who did feed the conversation. She still tested me by speaking about other guys who tried to pick her up, those whom she wanted to suck the cock. I encouraged her to do so, and she liked it. To reward her and because she is a photographer I got her in touch all the same with the model of July. Who knows, this partnership could be beneficial to both of them… At the moment, she photographs only her friends who do not really look like models, needs to say it.

The day of our midnight swim arrived. At 7:30 pm, I sent a message “still good?
– … (no answer)
– ok well I understand if you changed your mind, good night.
– hello, yeah it is good for me, here is my address and my number, come picking me up plz.” Well, I avoided the flake. But I didn’t leave for 30 minutes on the road without having guarantees.

On the sand, the feet at the cool, we lengthened on two towels, which did not stop getting closer. She talked a lot… from time to time, she said that I didn’t speak a lot then I aligned three sentences and she started talking again. I rose on her, to make her a massage, she removed her top spontaneously but did not let me touch her too cute tits nor her buttocks. One fucking hour of caresses and kisses everywhere except on the mouth to tame her then she told me that the water was too cold while we should rather go in a dark corner of the beach where nobody was.

She was very hot when I entered a finger into her. I like this kind of girls, very expressive “oh yes go on do not stop”. I would have been able to fuck her there just like that but had a guy there who looked for some gold with his metal detector and who turned all around us, then guys who went for a pee in the sand not far then well I was not able to. We went in my car, she led me near a monastery or I do not know what, on a parking which dominated Martigues. This girl has a hot body, small breasts not flat and a small convex bottom. I licked her then fucked her on the back seat, it was nice. When she came, she was shaken by incredible cramps, it was funny. She admitted to me being allergic to the latex, nevertheless we put a condom… Then, apart if she inverted them and gave me a special without I notice it such a conjurer, I understand nothing in her story of allergy.

She came against me during half an hour after the sexual intercourse, our two bodies recovered from the effort. Whereas I, I looked at this monastery by beginning to freak out of if there were ghosts or something… well, her, she quietly fell asleep. I woke her up and returned her at her home. A kiss and go to bed.

I returned, the wind in the window arranged my hair, with the head up galvanized by the sense of accomplishment.

I didn’t do it because the Coach had tried to fuck a girl on my bed during a party, but because I liked this girl all the same. Finally one who understood everything. The other side of the coin it is that I had pain in the cock. Finally that allowed me to put back the ball to the center with the Coach also because he had a little pissed me off lately. Like : I invited him to sleep at my home several times, invited to my birthday, made him go for free in two Champagne Showers, etc. and he had never invited me anywhere except once “Yeah nursing party next week that is going to be too good I call you if I go there and we go together?!
– OK good.” 10 days later “there is nursing party soon, right ?
– ah sorry I went with another buddy it was goooood!
– Ah”. So when he talked about a party on the beach, I harassed him. Finally here we are, a few days later he apparently knew that I had seen her but he did not know if I had screwed her, he came to tell me “yeah buddy I hope that you know that I would never screw a girl with whom were you before… I have values !
– Why ? A girl only belongs to herself.” In brief, he says that but he contacted all the same on FB quite a lot of princesses of my friends’ list thus that a little irritated me this bad faith.

I find these summer evenings very poetic. May the God of the Game be with you !

PS: otherwise, a funny anecdote… I forgot my session FB opened at a buddy. He connected, was been thought of as me, tried to pick up a girl, got invited at her home to screw her then he went there while she waited for me. Obviously, she said no. Needs to stop thinking that I fuck only easy girls, eh. It is because I make them feel comfortable and because I understand them blockings (in particular the social pressure) that I have good results.