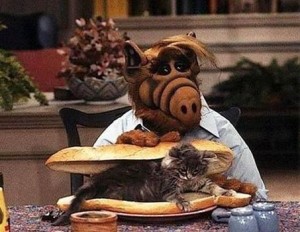 It is the ass between Hafid and 100g of flour that I write this text (flour that strangely often finds itself on the end of our nose when we get out of bathroom). I admit, we sniffed all night long a coke pure enough to be still awakened at noon, having spent the night like excited by the looped viewing of a dirty video of Paris Hilton. A smell of hukka useful for keeping our good mood is floating in this apartment that was not aerated since Hafid moved there. That is to say, 3 years ago.

In this city where I meet only superficial floozies, I decided that my texts would also be it from now. I am thus going to keep it short to please this bitch of housewife under 50 who does not like reading when it is written too small or who stops right in the middle when it is too long… but who paradoxically watches bullshit presented by Benjamin Castaldi till 1 am in the morning.

This morning, in an unknown bed, a young Eurasian quite hot leaned on my trunk. Having opened eyes and giving her my nice sleepy smile, I admired her tattoo that totally recovered her back. On the other side, a black slept peacefully under my right hand. Her hands of black panther with sharp claws had caressed almost all night long night my small fragile stomach of polar bear by leaving lively red marks there.

Fuck that could have been a dream but it is a nightmare. “Where am I? Would you have the kindness to remind me your first names, your ages and the circumstances of our meeting?” I received as answer only a dialogue between both accomplices “keep silent the white dude and lick our pussies then you will introduce a cucumber in each of us. The black gave me this order by now threatening me with a sexy gun.
– Eeh, I think that we have nothing else than carrots in the fridge. Corrected her friend.
– That’ll do.”

At the risk of offending my readers belonging to the Triads, I decided to run away, in boxers (but I find their daughters/wives/mothers very beautiful and respectable it is just that I am not sitophile nor vegetophile (I don’t fuck food)). It is thus half naked, lost in the streets of Aix-en-Provence with a half-hard dick that I decided to go back home. I guess that I was given drugs the night before in my favorite bar, they had probably put a bullshit in my drink : It is the only plausible explanation in my state and in the fact that my reaction seemed to me at the time completely relevant, adequate and logical.

Suddenly, a car honked me and stopped at my level. “Come on, handsome boy” told me an almost feminine voice. “What the fuck now ?!” I exclaimed by seeing the ugly and fat driver. But understanding that crossing the city dressed like that (it was not a dress) was not necessarily the best idea I had during this last quarter of century, I did sit in the car without trying too much to understand. “Do we know each other? Did we already kiss?” I asked my rescuer by praying so that the answers was no. “Don’t worry”. How did she guess that I a bit worried, fuck?! Finally, that could not be worse than my situation of this morning between two maffiosos. That’s what I thought…

She gave me, at the end of a few minutes, two pills. Fuck, my name is not Neo. She wanted that I swallow them but because they were shady, I said no. Thus she threatened to kill both of us and started driving at a speed of 150 on a road way less wide than Kim Kardashian’s butt. Well, done for done, I gave up. She stopped then in a street with little traffic and her eyes of willow miller started looking at me with appetite. “Agueh agueuh” I said to defend myself. The shit she had given to me made me high, saying yes to everything and having an fucking hard erection although the context did not suit me. Thus she started taking advantage of me. This is when we were interrupted by two policemen in service, who typed in our window full of vapor. Right when I feigned the ejaculation of a rabid bear, in addition. Well, I have nothing against the idea of being raped by girls, but still they would have to have been correctly operated.

I had difficulty in making the slang understand that I was a victim of a rape… then they put me in cell of sobering up. What they did not like, it’s especially the moment when they asked me for my papers and when I gave them the packaging of the condom. The big cow, her, was released on parole. Hell yes, women are always innocent and victims of the guys, these little fragile beings, it is well known. The most painful moment was the search, or rather the rectal touch: I felt at the bottom of the hole while they ferreted about in mine. The sentence was irrevocable: 48 hours of custody.

At the end of one hour or two, a rather cute cop came to me to say that she read my blog and to ask me to make her one of these rather brilliant cunnilingus of which I have the secret discreetly in my room. In exchange, she would make for me escape by leaving “inconveniently” the door of my cell open. My tongue and my fingers are thus now in the register of offences. Because she is good at negotiation, she wanted to keep my boxers as souvenirs. A pair of underpants that was full of testosterone, it is necessary to specify it.

It is thus without my pair of underpants that I escaped of the commissionership, the eyes doubtless as lively as the perverse cocaine addict who was in the cell next to me (He must have thought that it was a hallucination when she came). I met a nth girl who stopped me. She told me that she was happy to meet Cyprineman in the flesh (and sausage) because she had still never achieved orgasm at the age of 25. She begged me to make her finally taste the carnal pleasures and to sign her an autograph… all this with a look of Rumanian who begs in the subway. I was not able to resist. I told her that it is my specialty and promised that I was going to put my talent in her profit for the moderate 100€ sum or for virile clothes. She accepted the second condition and led me at her home: phew, it was close by. She came several times like the madwoman that she is then invited me in a party that very evening. In the meantime, she locked me into her cellar stark naked… for me who am not used to revealing so easily my body, it was a difficult time. I have no sexual slave who waits for me in my cellar: I missed my life.

Dressed in an way too expensive for me suit that was oversized, I found myself in a kind of orgy with DSK (aka the bull from Washington). Two so high level perverts in the same room, that could only go awry. He proposed me 1000€ to sodomize me while making me drink heavily an old corked Bordeaux. I am an easy boy who cannot drink a lot. He put all the same a Yves Saint Laurent condom. He then proposed me 10 000€ for teaching him my secrets to fuck girls without having to pay them. He took notes on the back of a young one Slovak desk clerk, claiming to be frivolous drug-addict and dyke, nevertheless busy with alternately blowing us.

An ex first lady of France (a little old but still hot), nicknamed “TGV station” by poets who have gold teeth (but her the identity has to remain here as secret as the recipe of Coca-Cola), was also at the party. Having let her got me drunk with some champagne-rosé like a gay, she proposed me game in sadomasochistic mode (domesticating me with her crop) that I was not able to refuse. She asked me if she could film the scene to send it to her husband, a very high-ranking man who likes Flamby, to make him grumble. Thinking that with any luck, I would finish on the cover of Voici and then be able to write a best-seller full of spelling mistakes, I said OK. Steevy Bouley held the camera. Nabilla sucked the microphone. Some are less stupid than we say it. Others more stupid than they think they are. Others finally take us for idiots by persuading us that they are idiots. It is their case.

What followed is rather funny: Alain Delon said I am megalomaniac and an old leader of the UMP offered me a chocolate croissant.

By going back home in the early hours, I made a detour by Hafid’s to tell him these adventures before I have a memory lapse (Ingrid’s ordeal in the Colombian forest, it was Jet Tours by comparison). I found him sleepy at the foot of the front door, the key pushed in the lock. The guy was doubtless drunk with vodkapple. He mumbled in his sleep that he imagined his young trisomic niece naked. It is stunning how narcotics can make us crazy.

Did you well read the date, dead losses? I wrote that on April 1st (Fools’s Day)! April fool!!!

We won’t stop telling you stories

May the God of the Game teach you the benefactions of the sperm on the health!

previousNot enough success VS too much success
nextFast Seduction practice