I kissed her and she said “thank you” 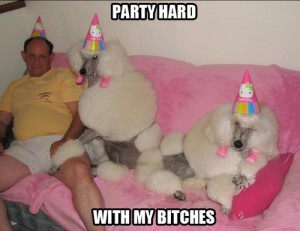 Sandra is one of my friends of the high school of whom I had lost sight since a moment because she did up several times her first year of medicine and because she now lives in Marseille… But I set foot almost never in this yucky city!

My relation with this girl was always special, I thought for a long time that she would be the woman of my life and the mother of my children although her legs open faster than a Google page. I’m not saying that I didn’t think to other girls but when she was there, no other one existed. What a lot of bullshit I made because of her! It was irrational because I did not see her often either but well « Out of sight, out of mind » does not really apply any more since we have the social networks. I was trapped, she was my Odette de Proust. I guess that I idealized her because she was not apparently the one who lived in my spirit, but I took time to realize it. It is not that I doubted my capacity to create interest with another one, but I was persuaded well and truly that she was THE woman whom I needed. Then, I waited for her, for a long time… The irony is : I am sure that it is this one itis which handicaped me and prevented from possessing her. She probably contributed strongly to what I became, by breaking my heart (boo boo). That would have been able to be different my dear, so bad that we both are so stupid and proud.

In brief, further to an invitation, she came visiting me in Aix: « Hello, party at my place on Saturday, come that is going to cheer you up » ; « I am not depressed but your message pleases me, I am going to come with a friend. »

Once everybody arrive, we let people party in the Lounge and we went to my room with Sandra the brunette and her friend Laura the blonde. We flirted a little, we made eyes, we touched more or less innocently, we took photos in naughty positions any tongues outside then Sandra informed her friend and told her: « I dare you to kiss him! » Now Laura jumped at the opportunity for kissing me (not specially drunk in addition if I trust her breath), and then challenged Sandra : « Your turn now! » Wow, I like being a man AND a sexual object ! I gathered both as we alternate Advil and Doliprane when we are stupid and sick… We got along well all three, even if it is obvious that Laura has the IQ of a Barbie (as well as the physical appearance, fortunately for her) and that amuses Sandra a lot to make fun of her friend. Me too btw, but politely : you know my legendary tact…

I said to Laura, like that, just for fun : « when do we make love ?
– Right now if you want… » I skip some useless events. At about 2 am, Sandra decided to go back home because she was tired (supposedly: she had too much fucked the day before with her Regular Sex Friend) then I took her aside by putting the blonde away, and told her that I would like to have her for me alone. She answered me that, for that, I should go to see her in Marseille ! I kissed her again, but this time, there was no more the pretext of the game to kiss in a hot way (deep kisses) ! We spoke again on Skype this morning and I went to see her in Marseille to spend the night with her. But this euphoria and this vain joy had a price: by leaving, I ran a red light, lost 4 points and paid 90€ of fine … It was less good.

Back in the narrative of the party : Once my two favorite dolls left, I was feeling « full of confidence ». I remember that another friend had invited a girl called Aurélie who told me: « I have already seen you somewhere …
– We certainly already kissed in a club », I spontaneously answered (It was a joke obviously seen that I did not know her, but she was a floozy conceited inhabitant of Aix, needless to say that it excites me!) It turns out that I had sent her in fact a poke one year or two ago which she had never answered! I still wonder how she was able to remember it (she probably doesn’t have a lot of things to think of or then she is a crazy weird psycho)… Then, I photographed people, moreover one shall say what we want but the one who has the camera has the power in the party, And at the moment, I photographed an English who started speaking to me (drunk). She took her coat while informing me that she went to the nightclub with her friends. I told her : « No, I want you to stay.
– Me too I wanna stay but they want to leave… » And at that very moment, I kissed her ! I remember it well because her answer surprised me, she told me « thank you ». It is maybe a custom across the Channel. Thus, the party continued… and at 3:30 am, we went into town with the last people who had stayed at my home. There, I realized with bewilderment that half of the club was in my apartment a few hours before! It was me the boss YEAHHHHH!!!!!

I spotted the English, have kissed her again immediately without other shape of trial. I stuck her to a wall then continued… After a while I took more and more initiatives : I fiddled with her more and more. At about 5 am, while I was occupied with making comings and goings on her clit through her jeans, she told me with her adorable accent « in order to do this, we have to go to your place ! »

Besides, pleasant surprise, when I got up naked : my roommate and her bestah already were cleaning everything. A clean flat in the morning : it made my day.