I love you now 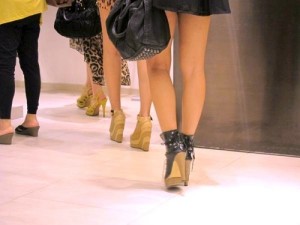 Sometimes we make crazy things, we are very afraid but it’s still one of the best memories of our lives.

I encourage you to break this glass prison that is fear because it is behind fear that crazy experiments are located.

Sometimes some people will do for you, or will push you to do so, but it is rare, knowing that humans have a natural tendency to procrastination. Then do not always take the easy way out. Also know that more time is running, more people are anxious and afraid. I speak about French people in general. I am going to try to motivate you …

Remember though that: the one who does not make a step forward makes a step back.

That day, I was a bit bored so I went alone to the mall “Plan de Campagne” hoping I could find some new girls with who I could go out (because all my friends were sick or in a couple or pissed me off).

I wandered for a while in the shelves of different stores without finding the courage to approach. I was resigned to fail when I saw a pretty saleswoman who took her break who was open. There were no many people so we could talk easily, it was a good thing. Opener : you cannot look at me this way and not talk to me.

I made to her a lot of bad jokes and I teased her and everything. She said she worked a lot and I told her that too much work and no fun makes Jack a sad sire. She said I was the coolest customer of the day. “But I’m not a customer” actually. It was true because I had bought nothing. I asked her if she was damn bored all day long to see the bimbos and the riffraff who populate abundantly Marseille since Gaston Deferre buying things clearly over their waysin cash with the drug money.

She said yes, but one must earn some money and that jealousy and malicious gossip are useless. That the most mattering was that she leads her boat legally. So I said a “I love you now” for fun and to try something I read in The Game ; and she came in my game. I felt that I had tamed her in two seconds then I asked her to close her eyes “why, you’ll sting me something?
– Awww no, trust me, I’m in love with you, you know so trust me.“She was playful and understood my special humor so she did … and I kissed her. Well, it was not the coolest kiss in the universe because:
1) the situation was not very appropriate
2) I was psychologically ready to get slapped so I was a little defensive
3) I felt the eyes of the people around us in the “what the fuck?” mode (or I was paranoid).

“Do you often do stuff like that?
– Every time I fall in love.
– And do you often fall in love?
– Shut up.” I let her regain some composure and she told me cool stuff like “it is the most surprising thing that ever happened to me since I work here except when a customer has crapped in a radius and that the guard was showed us the video in a loop.” So I have promised to come back. I never did.

It’s so beautiful to break the everyday of people this way. If I could, I would do it as a job. But for that, would need that I earn enough money to live…

So buy my ebooks, babies.

previousOral orgasm while blowing
next30 little lessons on the gender relations