I went to the Eroticism Show in Lyon 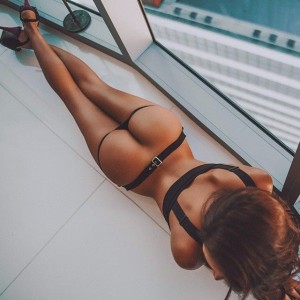 Last weekend, I went to the Eroticism Show in Lyon.

I was aghast: first of all in this stuff, they make you pay the entrance. But you pay for what? They make you pay to access the stands where you can buy things (sextoys, fluorescent condoms, accessories, clothing, lingerie).

Frankly, isn’t it a big joke? Anyway, whatever, I’m not a sucker. Basically, I went there (not by curiosity as would say a girl who does not assume) but to approach libertine girls. There were actually not much to approach: only couples and men. There was all the same two or three groups of girls that I have approached but they were lesbians.

There was a guy stripper too, who made his show, he wanted to warm the ladies: a guy, a fucking bodybuilder (too muscular for an ordinary mortal). Not beautiful, not tall, just very muscular. He pretended to undress but we never saw his cock. It’s a little bit ridiculous, I think. Does he have a small cock or what? In any case, to warm a woman through photos on Snapchat or anything: you have understood, never show your gun unless you can use it. This is how the professionals do. For the girls who want to strip, it is based on slow and anticipation. Like, before removing their string, they make a break then take it down completely!

In this show: she arrives on stage disguised as a policewoman and begins to touch roughly her pussy with her baton. Then comes a prisoner, Tony Caliano. She made him sit down and abruptly pulls out his big cock (something huge it’s really excessive) and begins to suck it greedily (he was hard yet does it take drugs?). Then he fucks her (still without hug, kiss, nothing) in several positions and she cums (not him). Frankly boring. Zero. A waste of time. A purely mechanical sex. Not what I like! It was impersonal. I have not even felt the beginning of an erection, rather a vague sense of unease.

In the alleys, I have been approached several times by girls. In fact, the concept is that fucking sex-bombs smile you. They do like sluts. And if you smile back, they approach you “do you want a lapdance?
– Fuck yeah, what’s the price?
– €60 for two dances ie 7mn, €100 for a sextoy show. ”

Finally, there was a Jacquie et Michel stand that had put an ad like what they were looking for actors/actresses. I asked how much it was paid €200 for guys and €300 for women for a scene which lasts on average between 1 and 2 hours. By cons, they take only single women or couples … how surprising . Bis repetita, I wonder if these guys do fuck the hottie we can see in the movies while they are old and ugly.

A thought for the girl of the body painting who, since she tasted the joys of striptease in Australia, continues to practice in Paris. Despite her psychology degree, she has a strong character! At least, I can say that I banged a stripper.