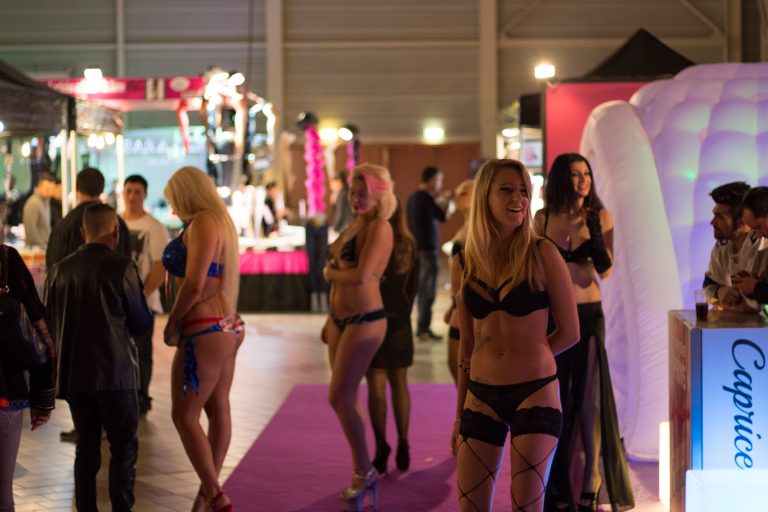 Then, as Barney often does, I wanted to try to pay myself a lap dance. It was pretty cool even if I did not get hard!

Finally, we wanted to approach the chicks but there were not many in the audience, only couples or alone guys. We still found two or three but they were not receptive. We also asked strippers for their phone numbers but there was their PIMP next door so they said they did not have the right.

As a consequence, I had a lot of sexual energy when we went out with the LAIR on Saturday night. But I also had a fucking virus. No matter what, we were still hung out into the street by approximately -150°C. We really should lose that habit! The only fun thing of the night was when I asked two chicks who were dancing together « will you kiss each other afterwards? » And they kissed. Then “are you going to kiss me now?” They did it.

Yesterday morning, a friend from Aix that I kissed in clubs and who nevertheless had a boyfriend in the United States sent me a snap of her in underwear. It was so good that my finger slipped on screenshot. It drove her crazy! Lol!

Otherwise, a little more than one week ago, I spoke on Adopteunmec with a little girl. It was by the way she who had sent the first message, and frankly, I find it exciting !

“Wow, I have to admit that your profile has surprised me, but I liked it! Because you take position for the sexual freedom of the woman and, for a man, I find it quite awesome (for having discussed dozens and dozens of times with lots of men, I can say it is rare!)! Also, I find it funny that you have no taboo about sex, not because I have many, but I don’t know, I find it cool! Well, even if you’re not especially interested, I just wanted to tell you because I find you cool!”

« Hello Tiph! Thank you, it’s very kind of you to write to me! Why wouldn’t I be interested : you write correctly, you have a nice name, you’re vegetarian and you feel like testing me in bed? Kisses »

« It’s not out of kindness, I just find it cool, what you’re talking about ^^ Lol you get into the heart of the matter directly! Well OK, you inspire me, so I have a feeling ;) »

“It’s not in the heart of the matter that I want to get lol. Thank you for this compliment, I also have a feeling, so you will have to come to my place.”

“That’s okay;) This week I’ve my exams so it’s a little bit hard for me but if you can wait until next week it’s OK^^”

And from this moment, no more news… it was not very academic as a game to let this silence like that but I was lazy to feed the conversation and I was busy.

I did nevertheless, the day before yesterday, around 11 pm, without believing much into it : “So are you coming tomorrow?” Yesterday, around 4 pm, I received: “Sorry I answer only now but it’s good for me tonight yeah :)”

We made an appointment at 9pm at my house but she arrived at 10pm. She said she was lost and freezing. I was pissed off, but when I saw her, I was glad to have waited. She is very beautiful. Her face seduced me. She looks like one of my ex, an American girl, but thinner and taller, with darker hair. It’s the improved 2.0 version.

She said she was 19 years on the dating site but confessed to me being only 18. Her explanation: she was a minor when subscribed on the site so it created a lag.

We drank a glass of wine. We talked a little bit about everything and nothing. After a few minutes, I stroked her hand. Then her face. I took her hand and put it on my cheek, she caressed me. I also provoked with my habitual bad faith, I pretended not to know why she had come. It made her laugh.

She was the first to give in to the temptation of kiss, she kissed me passionately. I then opened her belt to slide my hand in there while, on her side, she had problems with mine. Fuck, Efficience, what I like seeing the chicks trying to find out how your belts work! Me, meanwhile, I was stroking her clit, quietly.

I ended up opening my belt for her. So she shook me a bit while I touched her pussy. Then I turned her around and fingered/stroked standing against my table: winning combo. She began shouting, trembling, and so on. She enjoyed it.

Then I undressed her completely and laid her on the bed. I licked her there. She went back to making nocturnal noise. Second orgasm. She shook me after, while she recovered: she was all red.

I told her I wanted to take her. To penetrate her. To fuck her. She asked me if I had condoms… so game was on. A little quiet missionary to tame her wild pussy. She asked me to bite her neck. Then I made her come on me: her way of positioning allowed me to caress her clito at the same time that I was in her. She enjoyed very strong!

I saw her high, trembling everywhere with an empty look. Then, I started a hard doggy style. I fucked her really hard in this position. Seriously, she has a nice ass, awesome waist as I like, cute breasts with pretty nipples, beautiful hair and green eyes that I did not see in this position. Super sexy! She came again but begged me to take a break because she could not take it anymore. I told her I was going to finish.

So I let myself go. Fucking a girl like that, it’s so good!

Then she sat cross-legged, just after the post-coital hug: she told me that she could barely stand. I was amused ! She put on her underwear to go smoking at the window. We talked and she said “it was very good, it’s been a long time since I didn’t have sex. “

After her cigarette, she was still hungry. To show her gratitude, she shook me and finally decided to suck me. It made me want to take her ass. I took her doggy style on all fours. She enjoyed again, asked for a spanking and then I said to myself “it’s okay I will finish now”. Except that I could not finish again and she came one more time. She ended up asking me for grace! I accelerated to finish but I could not get there, it was sweaty, my heart was beating and everything. I started to think about the heart-attack, I freaked out, I went out of her pussy. She shook me but I got soft. Too bad, I was dead!

We made a hug, and then she began to pout. I felt she was not OK so I asked if I had said or done anything. She replied “it’s not about you, just that I’m thinking too much”. Well, I think I’ve understood, she surely thought of her ex, a classic.

Morale: A profile that did not look so awesome but behind which hid a pretty little girl.

Before she left, she told me “see you next time, if you want to.” It was too sweet!

This morning, it’s hard. Sore throat, big headache, teeth that hurt. I’m tired and wiping my nose all the time. I hope my brain will not go out through my nose hole… it’s really a pain in the ass, seriously!

The only satisfaction was that the boss’s niece was in tears on Friday afternoon and told my colleague that she did not understand why I got mad at her. Lol! Now she plays on the sensitive strings of piety because she has been too far… Well done! Do not piss me off next time!

previous7 tricks of manipulation and persuasion
nextThe basics of seduction