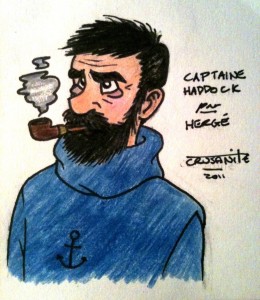 Well. Yesterday, poeple have obliged me to drink… again. I swear you, that becomes a habit, and a bad one. Late, arrival at the Breton’s at about 10:30 pm: we persuaded her that the captain is my cousin and she dared to comment « Ah it is him who took the good genes then ». I was in another world around midnight and I think of having acquired alcoholic’s great powers because I have been teleported in one of my favourite bars by the city center. Good !

Answered present Hafid and the captain. I saw Chacha at a table not far: Chacha it is a girl on whom I broke my teeth in December. I had kissed her and everything, then had warmed her at my place but she preferred to leave meanly rather than having orgasms. A last-minute Resistance that I had seen coming, and that I did not know how to handle… and finally a lose-lose scenario. Big deal.

In brief, I saw again her, and having practically had no contact since this story (except for dates which she had meanly flaked at the last moment) I invited her to come drinking with us. She was with a friend not that cute who is here to make her feel more pretty thus I shall not talk longer about the subject. All this to say that it moved me to see her again like that, so cold and distant after the connection and passion we had. With her small air which seemed to say ” you will never have me, you will even never know if I am a good in bed or a starfish “. I also vaguely remember having seen the Coach of Marseille and having treated a girl of “diary unicorn”. The mysteries of the drink… Well, balek, at around 2 o’clock we abandoned them and we went to the same club as the day before : The captain, no here the night before, really wanted to approach Swedish.

Unfortunately, no Swedish on the menu last night but we tasted two German instead. One to whom I had already spoken yesterday who had a tall friend and cuter friend than her. Well, two blond cuties. In brief, the short girl already liked me the day before but the tall one was not interested in Hafid, then all this played against us. Except that this time, the captain knew how to catch her attention. They spoke a moment then the captain came to me “One thousand scubbles, she doesn’t stop talking about her boyfriend.
– But you want her or not ?
Yeah, she is OK (the captain is strangely very demanding for a guy who did not have sex since August… He probably tries to justify his abstinence by superior aspiration but it is bullshits)» Then I came to his girl and told her “You know french kiss?
– What (said with a very cute accent)?
– You know frenchkiss?
– Yes (said with a very cute accent)” and I pushed her on the Captain. They looked in the eyes a few seconds and kiss kiss. I made the dance of the victory around them!!! Then, I turned mine on in a dark corner. I dunno what I have with the foreigners but I like them. They always make me a lot of effect even if I rarely arrive to something with them!

From this moment, the evening became totally BNS (big nonsense). I swear, I saw not Catholics things :
– I saw Youyou, the fat guy of yesterday, taking two or three rakes by the same girl but always trying again then complaining that it does not work! He wanted that I compromise with him, the coward I meanly gave him up pleading to have to practise a cleaning oral according to the rule book. I have to take care of the relations between France and Germany.
– Hafid cleaned himself the nose and took out two very yucky pieces. I also saw the Captain making faces, imitating Führer in front of the German and everything. He is very funny this guy. A girl had looked at me in the eyes and diverted her trajectory until striking me supposedly casually … “Approach invitation” will you say, except that I laughed. She took it badly. Seriously, I’m fed up of their girls’ manners who do not assume they want to fuck. I don’t see why I would make efforts while they content with being totally passive.
– At the moment, I dunno why, the Breton stuck me to the wall. In fact, she was up against the wall and I back to her and we spoke to each other by turning the head. Except that at the moment I too much turned to tell her I-don’t-know-which-unhealthy-thing in the ear and she kissed me. I saw nothing coming, but I was drunk then I have kissed her back and I ran away by pretending to complain. It was nevertheless not so unpleasant but… quite legendary scene.
– I also explained to my German that we had to drink a tea naked at my home with her friend and the captain but it was not possible. In brief, not grave, they say that they will come to my birthday the 23. Having said that, I hope to fuck mine in the meantime (2 weeks it’s more than enough).
– In the kind funny scene, the Breton proposed her mouth towards Mytho, a buddy of Hafid (he adores making friend-friend with misfits) and she approached like to kiss him but she turned away at the last moment. I laughed. Really needs that I speak about Mytho because I have not did it yet (I just saw him 2 or 3 times in my life)… In fact, his girl is a model in Paris, from a rich family but we have never seen her, and she has not Facebook. His brother is the dealer of Orelsan, and so he knows him personally, but are no photos. Moreover he knows a lot of celebrities (but has no photos), lived a lot of adventures (but no photos), all the girls try to pick him up but he does not want of them, they are not well enough for him (but they do not remember him). And more…
– Then, we went to the smoking corner. We saw there the Breton approaching a guy. I sat on her knees and the captain next to her. And we splendidly screwed her luck: I licked her the arm by going in the neck up to her ear in front of the eyes of the guy, stunned. She said nothing. I then kissed her tits whereas the captain took them in his hands (through her T-shirt all the same). I dunno, the guy did not understand anything, and that amused us. Then we made fun of her and everything. It was funny. Hafid immortalized the scene.

The club closed. A waitress said “si vous auriez l’obligeance de sortir”. Not one not two that the captain answered “aviez”. He approached her and it was funny. She tried to justify herself and everything but no way, you don’t know how to speak, girl. It is moreover certainly why you are 25-year-old waitress. They make me laugh these idiots, people try to pick them up all night long so they feel powerful but seriously… The waitresses and the waiters, it is the same thing, passed certain age that is not glorious.

We also saw guys trying heavily to steal our girls. By leaving I put a hand in the bottom to the Breton and she touched my cock (through my pants).  We went out and she was approached by a ugly blond. English, I believe : “you return with me?” Told with an accent of shit in front of the club. “Yes”. She left with him… I did not believe it. Then, 5mn later realized her mistake and called us for help. We are too nice, we saved her.

I forget certainly things because of alcohol (I several times remember having said “fuck it’s a pity I will not remember it tomorrow”) but well. The main part is here. Kiss.

previousI approached a lot of sets with lines which I would consider as legendary
nextI opened a girl by asking her “did you fart?”