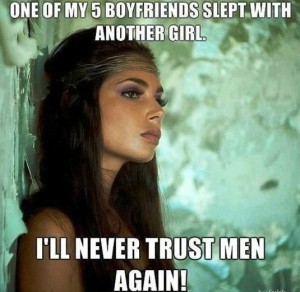 It ends always badly. Watch out, I say it in a positive way, make no mistake about it. I give some explanation.

Most of the guys are afraid of taking too many initiatives because they content themselves with small successes. They want to be able to rethink about the interaction and keep a good taste in the mouth.

You know very well my point of view. Make her say no. Squeeze her like a lemon. My creed « blow me or blow me out but let’s not stay in the inactivity ». The problem is that you do not most of the time really try to be sucked nor offended. It makes you happy to be there, smiling and listening her laughing at your jokes. It makes you feel good. You want to leave with the head up then you do not push the things at the max.

It is cool to hang out with a girl and to make her smile blissfully. Most of the guys content themselves with that. They prefer the soft and platonic company of a woman to a fast physical progress because this latter presents the risk of brutally breaking the interaction.

The same thing can happen when you mutually caress your hands. The caress of hands is so pleasant that you forget to push things in a more sexual way. But the problem is that this feeling of well-being does not last. And it does not last because she will leave you as soon as she will have met a guy with who she will have a more sexual connection. Yet, what’s the point ? Talking to her during 10 hours or penetrating her during 30mn ?

A guy strikes up a conversation with a cute girl in the street. They walk together up to a small bar. They exchange their names and flirt a little. That goes well. He would like to suggest her having a coffee but he freaks out then does nothing. Later during the day he wonders what she would have answered if he had invited her. Shit. She was really hot. However, in spite of his regrets, he is satisfied all the same, he gets a certain shape of satisfaction. The memory of this interaction will remain pleasant : He approached successfully in the street and gave a smile to an attractive girl … Good.

The truth is that he did not try to have more because he was afraid that the interaction ends badly. He did not want that his last memory is a pitiful rejection.

« Let’s drink a coffee.
– Sorry I gotta go somewhere with someone in order to do something. Bye. »

Now, he sees things differently. He was clearly rejected. The interaction was a failure since the beginning but he had not noticed it (isn’t it better to know it since the beginning ? To postpone is a bullshit especially if you maintain the secret hope to see again her in a few years by chance to take FINALLY your luck …) Do you recognize yourself in these extremes :
– Taking a lot of numbers but never calling back ? ;
– Flirting with women all the time but never proposing them something concrete because you are afraid that they say no ? ;
– Making girls laugh but never trying a physical escalation because you are too much afraid of being rejected ?

How does it end ?

The passive interactions end often as follows : she ignores your SMS or pass you the buck (bucks are like endives: that should not exist because it has no interest but it exists then needs to deal with). Or then you had a strong connection but because you have never pushed things sexually, it is the shit and you got stuck in the mud in a very strange relation. Sometimes, you will feel the desire to ignore her or to tell her that you do not want to fuck her. It is called FRUSTRATION.

No matter who ends the relation, it will always finish badly. You will break up, sooner or later. Unless if SHE is the woman of your life.

Good for the ego

The guys want that it ends well to have a short history to tell to their friends « How I took the number of a cutie in the street or simply flirted with her but it is still really good in my opinion ». It is just a question of ego. They do not escalate tactilely because they are not sure that it will work. But realize that, in any case, it will always finish badly. Every time (that you fucked her before or not). All the groups you will approach, all the numbers you will take, all the girls you will fuck, all your sexfriends, your girlfriends, etc. it will always end in a bad way (unless if you find THE girl (and still …)). That’s it, the thing which pisses off. Be prepared there! Life hurts …

But even if it always finishes badly, you will always guard a recording of the funny part in your mental hard disk. You will fill up with positive experience. And nobody will never be able to take it from you. Even if tomorrow there is a nuclear war, you will always have the memory of this naked girl kissing your abs. The pickup, it is little bit like an investment… A journey which we would take and from which we would come back at home, in the square one, but the testicles extremely empty and the head filled with magnificent hilly landscapes.

But, first of all, it is necessary to succeed in approaching… and, good news, it is the object of the next part of the book !