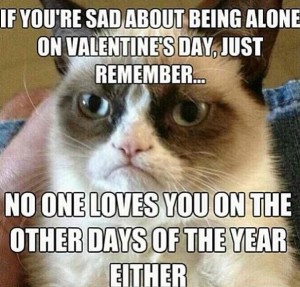 It is cool to have a date on Valentine’s Day (for once that I do things in the order with a girl, hallelujah) rather than a girl. I am going to write this story by listening to the song of Orelsan then do not be surprised if I write crazy things or if I am particularly unrefined. I dedicate it to my cat which preferred shitting in the washbasin rather than in its litter. Besides, it looked at me this morning while I took my shower with a look between the pervert and the intrigued : it did not see well the interest to get wet. So cute !

Last Saturday, having nothing special to do, Hafid, Arnaud and I went to an apéritif to a friend then we decided to go out in a pub. We arrived freshly as roaches on the dance floor (having drunk 3 bottles of vodka for three, among which 2 for me alone). There, a girl turned up: tall, brown hair, curly, with glasses. This cute four-eyes gave me her glass of champagne ! Neither one nor two, I thanked her by smacking her. It’s a little bit my habit of the moment : I kiss the girls who approach me a little too much and I see what happens. She went away then came back, so I kissed her again but this time our mouths got to know each other better! Although I adore extending over details (and on the girls), I decided to remit you the two hours which followed during which I did just nothing else than licking her tongue and talking like M.Merdocu from Les Robins des bois. Really needs that I stop looking at lousy sketches before going out. I was moreover entitled to a remark in this connection (I am very proud of it) : « Don’t you wanna try to be a little bit charming? » NO !

I finally decided to abandon my prey and to go to a nightclub with my buddy who was bored. There, I perceived a girl with whom I communicate on Facebook and Skype for a while. I saw her, she saw me and asked me a captivating question: « Ah hello, what are you doing here ?
– I came just for you ». We spoke a little by dancing very closed, she danced damn well and me I was high so I took advantage of it to invite her to my birthday party : « do you wanna come to my pool party ?
– IDK, it depends.
– It depends ? If I am a good kisser ? » After this memorable transition and according to the law whichisfinetome « silence means consent » I French kissed her once. Then twice. Then we spent at night (up to the closure of the club) fiddeling. I then suggested her to go to my place but she did not want… I liked her frankness « It will be useless. You will fuck me, it will probably be bad, or we will be in couple two weeks. » In front of an argumentation of this calibre (even bigger than mine), I took her number and slid her all the same a finger before leaving, for the road.

(Subliminal message : this text is fantastic!)

I invited her in a nice bar and restaurant, we ordered a bottle of rosé, at about 11 pm, we were joyful and I felt her leg caressing mine insistently. I then tried a masterstroke: « Do you wanna come to my place to watch a movie ? » International signal for sex. She agreed. In the elevator, I came close to kiss her then went back at the last moment. In front of her stunned air, I conclude that I was brilliant. I finally kissed her, strictly no resistance. We directly went to my room. I stuck her to the wall, kicked the cat out of the bed, we warmed a little then we undressed. I cruelly threw her on the mattress then pretended to go down but she told me that she doesn’t like that. So much the better, anyway my tongue was tired by all those French kisses lately. I let her take me in her mouth to be even harder then I caught a condom under my bed and penetrated into her.

I read her desire in her look : we just wanted to be in the other one, quite simply. My sex rubbed her without entering. She finally let me coming into her with my tongue then with my fingers and begged me to take her. I went there at first slowly then I tried to find the rhythm which would drive her crazy. At a given moment, she wanted to take control and jump on me then I caressed her nipples with my hands and kissed them while being in her whereas my pubis rubbed her during the comings and goings. That showed me with which rhythm and intensity she wanted me. I made her shiver with pleasure then this pleasure became intensified by more and more powerful waves which invaded all her body. It is later in doggy style that she felt me the most in her. It is moreover in this position that she came … twice. I adore this language of bodies, because it cannot lie, it is more explicit, intense and penetrating. My hands on her buttocks, I appreciated the contact of her naked skin against mine, still hot. The following morning, when she opened eyes, I already was making love to her then she kissed me tenderly. The naughty alarm clock is really a timeless experience. On the other hand, I held too long (it happens when I refrain too much fuck) so she tried to feign the orgasm to excite me more … I didn’t really like the feint so I also feigned then roared. It was nice, I shall call her back.

I estimate in their just value the girls who are 100 % vaginal, it is restful for the oral orgy. I gave her three orgasms : her face when she enjoys is funny then why going without ? When I think of it, fortunately that she did not want to watch a movie after all, because I was not able to download lately and I did not want to watch again something which I would have already seen by caressing her weakly the arm like a virgin… We were not hypocritical in this situation, neither she nor I and that, it pleases on behalf of a woman.

Let’s realize : she didn’t try any last minute resistance ! To reward her, I let her sleep at my home : I do not propose it to everybody! And I did well, because in the morning she made me read the text that a pretender whom she qualifies of « weird » had sent to her, she told me that he writes every morning at about 7 am, except Sunday, although she answers almost never (and when she does, it is to tell him to go to hell) : « kiss of the morning the best one, what funny do you wanna do this week end ? Me after work, I will take pictures, then make a tattoo then go to Ikea… a lot of hugs the favourite brown haired of my heart. »

If you think that by sending this kind of texto, it is possible to seduce a brilliant girl, I ask you to go out and resume the reading of my book on the highway. Thanks to her, and thanks to him to be so knackered ! No offense, dude.

Big bisou (as Carlos would say) ! May the God of the Game be with you !

previousConclusion : I am finally happy in this crazy world
nextA symmetry in the French kisses is something important