It’s one of the simple life’s small pleasures 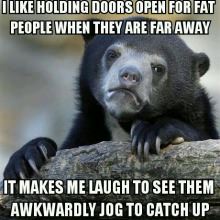 Sometimes, I’m so tired that I don’t wanna do something else than sleeping. But, If a bro calls me, I make an effort. I will tell you what happened during a very good night, before which Arnaud took me by surprise. What a shame ! 9pm text message « get up, come eat with me » ! Seriously, I thought it was Sunday. My body seemed to hurt everywhere (because of sport) but I did some self-motivation IN ORDER TO EAT. The traitor opened a bottle of rosé which made me forget all my pain! And, one thing leading to another, we went out !

In the first pub, I opened a set of Greek girls but didn’t understand anything they said and they weren’t really pretty so we decided to go to another pub ! On the dancefloor, I started talking with an ignoble Spanish accent (when I’m drunk, I often false identity to pose as a Spanish) : « tonight, I kiss without the tong. » A chick and her friend came to me, asking why, so I explained that I lose a bet (bullshits). We had fun together and the girl said : « I think, it’s better with the tong. » I asked her if she wanted that I kiss her in order to show her  how we proceed in Spain! She said yes ! So I kissed her, with the tong of course, and I said « oops ». One of the guys whispered me that I just kissed his sister. « Oops ».

Then, a blond approached me, saying « your friend is cute, what’s his name? » she showed me Nono. I was happy for him, so I caught his dead, I put him down from the podium where he was dancing like if he participated to the gay pride, I caught their heads and made them kiss. They did their business, but, after a while, she came back to me. I didn’t understand what she said, but I answered « do you think I’m cute too ? » I kissed her without waiting for her answer. I think she liked, because she asked my FB.

We decided to go to a club. I saw two chicks, dancing together, in the way « we are the two intimidating hotties of the club and we know it ». One more beautiful than the other. I asked them if they were going to kiss as lesbians : they laughed but nothing else. I abandoned, but after I while, I saw only ONE cutie, dancing with a boy… « Where is your friend ? I would like to see her again. » She explained that her feet’s friend hurt, so she was waiting on the couches. I opened her, just to tell her that I would like to see her again and that I wanted her FB. Her name is Aurore, brunette, thin, green eyed. Unfortunately, Arnaud wanted to sleep, so I asked him to wait, that I wanted to play at « double or nothing ». I came back to her, on the couch « I will leave soon, can I have a kiss ? » She said yes, she kissed me. « Good night. » I should maybe try to make love to her, but I was fine enough. It’s one of the simple life’s small pleasures.

On my way out, I crossed a group of Asians. The cutest asked me « do you really wanna sleep? », I answered « no ». She asked what I wanted to do, I said that we could kiss, she kissed me on the cheek. I complained « no, it is worth nothing », and tried to kiss her lips but failed. OK, by being so aggressive, it was inevitable that it happened. No problem, It’s already forgotten.

The bottom line is that, men like women, when we’re home after a party, we’re alone… Kissing some girls can have give us some validation, but in the end we’re in the same situation we were before going out. I’m not saying that it is very helpful to fuck someone, but still, it fulfils our needs, we feel better. Only kissing, without even taking her number, it is useless. What is the problem there ? Why everybody doesn’t have orgasms on Saturday night ? It’s social pressure. Girls are scared to be seen as sluts. The guys should thus accept that girls have good time, and do not be jealous when it’s not with them (in particular do not insult them), and women should learn how to enjoy their lives !