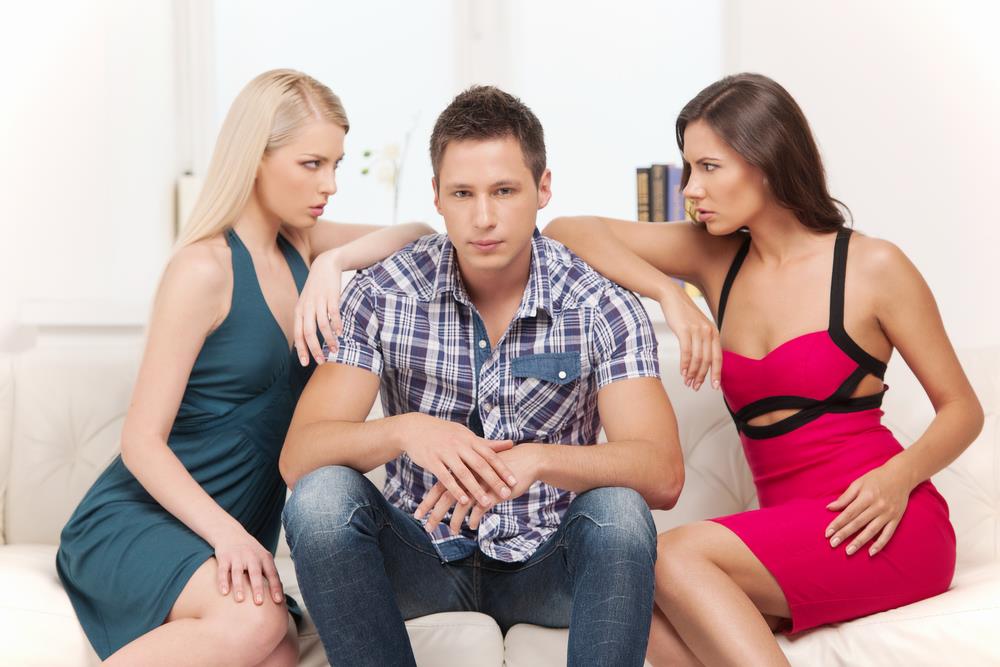 I went to La Prof’s because we had a date with a polonaise matched on Tinder. The girl has made resistance: fucking with a couple was her “dream” but she was too afraid to come and “meet” because our proposal was “too good to be real”. So I scolded her with the delicacy that characterizes me (luckily the barrier of the language helped so that she did not formalize herself… she was even a little submissive). She apologized for being such a “pain in the ass” and offered to come see us on her last day before returning to the country of super beautiful blondes.

She was really nice and pretty, this girl, a little plump maybe… but at 19, everything is still firm, so it was exciting. What is very exciting too was her accent and the fact that she mixes English and French. She was really open, we talked a lot about sex from the beginning. She told us that in Poland, her bisexuality is not tolerated at all: she can not assume it. However, the men there are not beautiful, according to her. Or, they are “boring”. In France, we are more beautiful… but no man she tested during her stay here or elsewhere made her “shake”, as she says. It was a fucking challenge for Cyprineman (like the one of last time who said not orgasming with strangers… but we had succeeded)!

We drank a glass of water but it is still very hot in Lyon, so we offered to take a shower with us. She was a little uncomfortable but played the game. She was soaped, rinsed and dried.

She climbed to the seventh heaven to the rhythm of my attacks, then we returned and licked/fingered her, in turn. When I was licking, the two girls were kissing each other. When it was my sweetheart who was driving, the Polish woman firmly held my cock in her hand and wanked her, between two sexual trances. She shook all over her body… and more than once. She came, came, came… but could not let go completely. So, we asked her to touch herself, to orgasm in front of us.

Then, the teacher started to suck me. Then, stretched my cock towards the polonaise, as if to propose to play with. The latter replied “I have never done because I always said that I would only suck boys who give me pleasure.” My teacher gave her a lesson to suck a cock… and it was very sensual. It was very nice too, since the student was diligent.

As a transition and thanks, I licked The Teacher up to orgasm while she was being caressed by the vodka drinker.

Finally, we made very nice positions. Like the polonaise lying on her back, The Teacher sitting in front of the head of the polak so that she can lick and me alternating between getting sucked by my girlfriend and penetrate the Polish in missionary position.

Then, we changed position: polak on all fours, licked and fingered The Teacher. Me, behind taking her doggy style. The beginnings were laborious because that I first went into her anus. She shouted “aaaah that’s a lot of pain.” I apologized, of course, explained to her that I had not done it on purpose. Then, I went in her pussy. But for my defense, I came there just as easily: she had a very dilated pussy. I could have last the day in this big pussy. I also had fun talking to girls as bitches, to turn me on, and it made us all laugh. For example, “So you’re fucking my wife, huh? Slut.
– Ahah sorry, I thought the husband was fucking me too… »

Then my darling lay on her back, leaning against the polonaise. I took my girl missionary with the pelvis a little raised, so as to hit the G-spot.

This is when I came. Then the polonaise told us she was very “lucky” because my girl is really hot. They kissed languidly and I took a picture to immortalize this moment (with their permission).

It will make Polish a nice memory of her last day in France. We talked a lot about it: she said that she works in her country (as a bookseller) for €600/60 hours. In France, she is paid the statutory minimum wage and felt very rich. She also told us that France was a very dangerous country, that she was afraid here. It’s still hard that life is safer in Poland…

Here, I write this FR coming back from my first day in my new office. For now, they are normal, but I’m waiting to see…