Kiss and see you next year 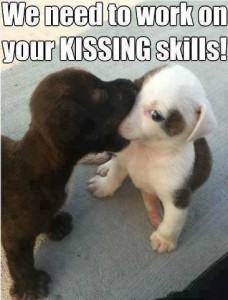 Wednesday, got lazy so I canceled a date « fuck-ensured » with a girl I like since more than one month. I really like this girl, we have a special connection. She had sent me « I have my period but if you want to see me even if we can’t have sex I ‘m in town this afternoon » and I was asleep so I forgot to answer. Butterfly effect : she insulted me through text messages then I called her to explain that she woke me up during my nap and everything but that it was a misunderstanding and that of course I wanted to see her. Date at 5pm, I finally rescheduled it at 6pm and then at 7:45pm…. because, damn, theses fucking Christmas decorations require a lot of time when you do not have the eyes in front of the holes. So we went to the movies, I paid so she forgive me and she chose the film. I didn’t remember she was THAT cute , otherwise I would have moved my ass more quickly .

She is the girl of Medicine (but not the one of the party) , tall, blonde , rich, hot , green eyes, Freemason and funny : the one who sucked my dick because I spilled a sugar pancake on my pants. She chose to watch « Popular » with the friend Duris, I like this actor so I smiled while leaving. I then proposed to make pancakes because I wanted to eat and while the dough rested : we had fun in the kitchen (on the hotplate it is hot, in an oven it is boiling )… I told her I really wanted her despite her flowing red river, so she kindly offered me to sodomize her. Not my thing ! During the second round, she chatted to me that this was only the beginning of her periods so we could finally do it (like what, when we want, we can ) . Indeed, the condom had just a slight pinkish tinge. Then we ate to regain strength and we did it again. I love this girl because in doggy style, she touches her clit alone, she had two orgasms Wednesday night and two others the next day. Because, yeah, I wanted her to stay the night … and I do not propose it to everyone ! Far from it ! At bedtime , she noticed the trail of blood left by Mary last time, so I chatted it was jam because I often eat on my bed  (no I didn’t change the sheets since – being more careful will be one of my resolutions for 2013).

I have offered to sleep with me because she is awesome. Let me explain: since she had sucked me, we had maintained telephone contact only because of her exams. But I often thought of her . Out of sight, out of heart, it’s true… Except that when I review her, everything came back to me in memory and we could go further. We deepened our relationship if I can say it this way. It was full of naughty stuff pretty funny : she coated my body whipped and fully licked me, I did the same (should always return the favor). We played with handcuffs, she was funny too. When I go into her mouth, her blowjobs are especially magical when she sucks on her knees, and when I lick her, it tastes good (rare) : she is very open and not afraid of anything. One of those rare precious stones that I do not want to lose… A female me ! So, we opted for a special relationship : I ‘m the only one and she is the only one with whom we do it without condom . This is not just sex , far from it , she is really THE girl I am with in an « open relationship» . What else ?

The next day we got up at 3pm and we made ​​love. Then we watched « Looper » that I had downloaded. I was hard for Emily Blunt then I fucked Marie (this is the law of the nearest pussy). One slight note of caution, while we watched the movie, she sent text messages to a Mister « Thibaut M » … I preferred to pretend seeing nothing rather than showing me uncomfortable or jealous. After all, he tries to pick up her while I sleep with her (this is the law of the nearest dick).

Thursday night , exhausted by too much sodomy, I suggested to the Coach met during the medical party to come in Aix. At the bar , we talked to quite drunk chicks and he made ​​me happy by practicing the « cash game » (Fabrice’s touch), that is to say, he told her « your lips are pretty » she said « you have to test » and they kissed. Then she left to join her « Belgian lover » , I quote. Then we went in the small clubs which are free but nothing to do there. I danced twice with girls except that after 5 minutes , they disappeared . I understood nothing , I probably didn’t smell good because I ate a shawarma before coming. Anyway, I dunno , I told to myself that it is like that sometimes, there is good evenings and nights without luck… Fortunately, on my way back , I found € 10 on the ground and I received a message from Marie of medicine : she wanted to spend a week with me… « challenge accepted ! » So , on Monday 31 , well I leave for a week with her ​​in the house of her parents in a small village which I forgot the name but where there’s snow.

Otherwise, I didn’t tell yet but the day of the end of the world : an ex (I’ll tell her story another day) came to collect her belongings but forgot her machine to smooth hair, I made an « instant date » with a girl who looked at me at the bus station and I went out solo in a festive before where I met some friends that I didn’t see for a long time. Some had taken MDMA, they understood nothing so I made ​​them sing « gnagnam style »  in Korean . One of them kissed me as soon as he saw me, I did not understand what happened , I was on my ass so I shouted « kissclose » raising arms . It was a kiss of friendship between addicts but… The only time I kissed a guy before it was to convince girls to do a foursome. Briefly, after an aperitif , still out in small clubs of the center of Aix, between mustaches, too much people there , so it fed me up. I tried the approach « do you want to have sex before the end of the world? » I’m not saying that I could not have fucked because I opened several groups and noticed one or two opportunities, but no, I dunno why , a lack of « mojo » probably and I was thinking of Marie ! To be honest , right now it’s not a party everyday in my pants, I reckon I’ve given a lot of energy this year and I gotta recharge my batteries. In addition , I have no more fresh plans, and you know, I love new pussies…  Last but not least, I saw a friend I had not seen for more than one year : he told me that he had become bisexual and he fucks a lot thanks to a libertine dating website. To meditate.

Yesterday, Saturday, I contacted the girl of the « instant date », maybe interested, maybe not, I can’t tell, it’s not crazy … Well, out with Arnaud and Hafid, I approached a girl in the crapper of a club but later in the club there was nothing to do. For example, I approached a chick and she cooled me cash « is it not better to dance with a guy ?
– Nope, me, I like animals » (she does not know is that I’m a beast in bed). Now, when a chick rejects me, I don’t care because I have this little voice in my head telling me « you do not know what you’re missing my dear little pussy, too bad for you. » Then I think to one of the amazing hotties I fucked, eg the Audrey Hepburn lookalike. It is for these small victories that I practice the game.

In short, one more bad evening, with only my left hand to escort me… It is the third one in few time then I’m questioning in my head. I’m gonna stop going out for a time, I guess. Come on, it was the night sexual frustration. Good night kids. Kiss and see you next year (I know you’ll miss me).