Last night, it snowed on X-en-Provence 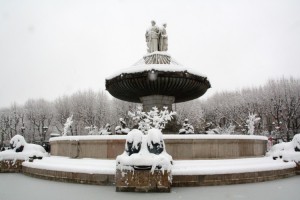 Last night, it snowed on Sex-en-Provence. Where I live, people stop everything as soon as it’s snowing. But I don’t give a damn because it did not snow enough: I can’t even shoot Hafid down with snowballs! Let’s be clear, I like this weather because it is original (and rare here) but I don’t like sliding. Besides, it looks like some sperm that would have been forgotten too long in the fridge. Especially that an awkwardly swallowed flake can in fact be a droppings of pigeon. Think about it next time you’ll open your mouth to go into raptures in front of this frozen water.

What makes me laugh too, it’s all the people who write on Facebook that it snowed on their lost village because… It is a little bit funny all the same this craze for three flakes (not the flakes with girls). Especially that one can find the same thing in his freezer.. I don’t like cold, on the other hand, because it appreciably reduces the size of my penis and makes it become blue like the one of Papa Smurf.

I went on Wikipedia to inquire on this phenomenon (seriousness girls if you want to see dicks, go on Wiki, great photos there): « The size is often a social and even a psychological difficulty for men who are below the average (13cm – 5 thumbs), in a manner which might sometimes compromise their sexuality. On the other hand, if have a large-sized penis is psychologically an advantageous, it is also a factor of difficulties for sexual relations. It can be the cause of painful and difficult bedtimes with some partners, and almost makes sodomy impossible.

The size of the penis has often be object of fantasy. However, the contents of these fantasies vary according to eras. Indeed, during the period of Antiquity, it was the small size of the penis that was valued, while now it is rather the big size that is appreciated. For Greeks of Antiquity, a virile man must be endowed with a small sex. Still today, in certain Amerindian tribes, social status is dictated by the size of the male genital organ, only men with a short phallus are able to occupy the highest places of the social order [they walk around happily naked all the time]. »

Researchers explain that the size of the flaccid penis doesn’t help to predict the size of willy in erection. On the other hand, they found out that more the index was short compared with the ring finger, more the penis was big. (It’s not a legend).

« The record of the biggest penis of the world is Jonah Falcon. According to the magazine Rolling Stone, this American native of New York would possess a penis of 9,5 thumbs (24,13 cm) when soft and 13,5 thumbs (34,29 cm) when hard. » Bigger than Rocco (when we love, we do not measure)!

If, somewhere, some Schtroumpfettes made a snowman in my effigy… please, endow it with an enormous carrot, then greedily eat it together!

PS = Make a payment on my Paypal account for more advice to live harmoniously with your willy.

previousThe more beautiful she is, the more it will be difficult to put her in my bed ?
nextGoing out alone or not, that is the question