Learn how to put aside your prejudices 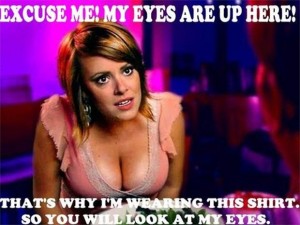 You have sacred problems which limit your successes with women.

It is when you concern hasty judgments on people or situations. You think that, simply by looking at somebody, you can say if she is a silly bitch or somebody cool. You think you can predict the girls who are going to like you and those who are going to hate you. You say things like « it is obvious that they want to stay between girls this evening, I am not going to disturb them». You are not an adventurer.

The kind of guys who says « there is nothing to do in this bar » or « all the girls here are in a relationship ». These people know nothing and miss a lot of good opportunities.

One night, I connected a group of girls who wore these enormous and colored strange glasses. I told them that my buddy did not want to speak to them because they had an haughty air. We eventually laughed about it and everything and they taught me that they had disguised for a birthday. They were in fact very interesting girls.

Another time, I saw a South American girl alone in a bar and my instinct influenced me « she must be lost ». I didn’t talk to her. Twenty minutes later, all her attractive friends came in and I felt knackered.

Another time still, I thought of speaking to lesbians (because of how they were dressed) but it was in fact a team of I do not remember anymore which sport. By the way, those chicks were very cool (and heterosexuals) !

Do this exercise right now

The next time you will want to speak to a woman, take one second to write the excuse which prevents you from it.

For example : You see an attractive girl you would like to approach but your internal voice rationalizes « she looks like a silly bitch. » Now get up all the same and go speaking to her. Ohlala, she is American, her accent is so sweet and she is very nice. Interesting …

Be sure having written down these three things:
– what you wanted to do (going to talk to her) ;
– what prevented you from trying (she looked mean) ;
– what really happened (she is in fact very nice and suggested you coming to have a drink at her home, the same night).

Pay particularly attention on the gap between your initial thought and what really happened.

After a few days, you will notice that most of those that you thought of being « silly bitches » are in really very nice girls, on holidays. That this girl who seems going out with this big sturdy man has just met him in reality 5 minutes ago. That both girls who looked like wanting to stay between girls are very happy to speak to a guy.

I did this exercise: it is very very funny. You will sometimes be shocked, amazed, disturbed to see how you can be at light years of the truth. Every time you imagine something about somebody you did not meet, it is only an irrelevant fantasy. And even if you were right, even if she is really a big floozy, at least you can say: « I knew it ».

You should try your luck (and her luck) and discover it by yourself.