I miss the pick-up in solo 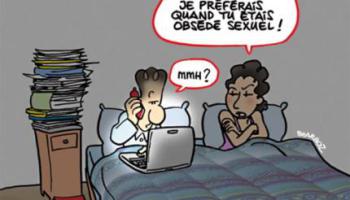 It has been almost a month and a half since last time I wrote. There are new things in my life, but not so much sex stuff.

First, the ultimate affront: one of my Facebook accounts was closed because I talk about sex (a virgin probably reported me to a moderator). “Your account has been disabled for violating the Facebook Community Standards and we will not be able to reactivate it. We disable accounts that solicit others or publish content of a sexual nature.” I’m mad, I’m furious ! There really is no freedom of expression, actually. Well, yes there is, but not for everyone nor on all subjects.

News from The Teacher

Following her faint this summer, I accompanied my girlfriend to her analysis: she has nothing. So it was a big anxiety attack, vagal discomfort. Very impressive, that said, but benign!

She is currently a substitute teacher and is bored. So, today I would like to talk about the mess that is our national education.

She stayed more than a month without assignment knowing that there were vacancies. Our dear department prefers hiring contractors while there are plenty of substitutes who are paid but do not have a job! Isn’t it a little stupid?

Since August 29th, I work in a new accounting firm. It is going relatively well, the atmosphere is cordial, the collaborators are a little boring but it is OK. The schedules are mostly respected (I usually do 8am-18 :30pm).

But there’s something wrong, but it’s probably because I’m too sensitive. In September, I was sick all weekend, I raised to over 39 (a fucking gastro). But on Monday, I went to work because the fever had fallen in the night. The thing is, the fever raised again in the afternoon, so around 4pm, I went to the doctor and then went home. I was stopped medically for 2 days. However, when I received my pay slip, I saw that the boss had removed me 3 days “Monday Tuesday Wednesday”. I moaned, very unhappy, so he finally paid me my Monday morning.

He finally removed me only 2.5 days. But damn, it sealed me the salary, this pettiness! Unlike public services, if you are sick in the private sector, you have three days of deficiency. So the first three days when we are sick, we are not paid, we have it in the ass!

But the thing is that when I came back to work, the boss did not hesitate to press me and make me catch up on the late files that had accumulated on my desk (so I did the same job for less money). It’s a little ridiculous as reasoning, because if I did not get up at 6am in the morning TO GO WORK, if I did not take the metro TO GO WORK, I would have less chance of getting sick.

If I did not take the subway, I would have less risk of exploding too. Because right now, frankly, at the Perrache station, there’s a bomb alert almost every day (true or false, we do not know).

About the disease: it’s stupid to encourage people to go to work when they are sick (yes you have to go to work otherwise you earn €300 less) because encouraging someone to contaminate all employees.

So, I told the boss my way of thinking. I told him I might be resigning. He was pissed off because before me there were two dummies who put an incredible mess in the files. To keep me, he offered to register for the DEC internship.

In fact, I am on a permanent contract, but if I want to be a chartered accountant, I have to work for a professional during three years. It’s a kind of professional training. I think I will accept his proposal. Because if I start this internship, I have a chance to finish it. I do not see myself as a salaried accountant all my life. In case my blog does not allow me to live, I can open my own office and work at my pace anyway.

The disadvantage is that I will have to work in this firm for a very average salary for three years. Fortunately, I still have a small income supplement thanks to my blog. If I sign this paper and commit myself for three years, then I will have an interest in moving to the sixth (next to my new cabinet). Because currently, I have almost 45 minutes round trip.

The Teacher also working in the 6th district, it was discussed that we move together. But, frankly, she still pisses me off a bit too often. I know that all girls sometimes have their moods and that life can not be pink every day. But…

The moods of The Teacher

At a steady pace, she inflicts me her fits of nerves. On the other hand, she’s a super pretty girl. She’s very kind. She took care of me when I was sick. She is intelligent. She has humor. She even plays with me sometimes in my Youtube videos. There is a very strong intellectual connection between us. We get along really well. She pulls me up a little too, she encourages me to start the 3 years of internship to be a chartered accountant, she pushed me to register for a gym and accompanies me. So, for the moment, I’m hopeful that her behavior will improve… but otherwise, I’ll have to dump her.

In addition, I get bored a little in my life. So, I do not pickup anymore and I miss it. Sometimes in the street I see girls that I would like to approach, then the spark is extinguished. Sometimes I’m on Tinder a bit, but I’m not going to the end. Yet, some really excite me.

I miss the solo pick-up a bit too. I’m also wondering if I’ll be able to stay with a girl one day. My stories last a few months, sometimes a few years, and then I come back to where I started. Am I too demanding? Will this hunter’s instinct that drives me to want to fuck the whole city will one day close its mouth?

May the God of the Game be with me!

previousPerfect woman: what is a perfect woman for you?
nextSextos: 20 good ideas to excel in the art of sexting