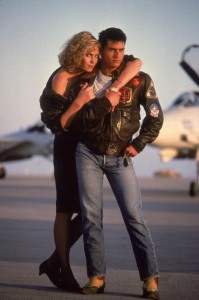 Top Gun is a 1986 American action drama film directed by Tony Scott, and produced by Don Simpson and Jerry Bruckheimer, in association with Paramount Pictures. The screenplay was written by Jim Cash and Jack Epps, Jr., and was inspired by the article “Top Guns” written by Ehud Yonay for California magazine.

Tom Cruise’s body language in this movie became cult within the community of the seduction. It even became the prototype. In The Game, Neil Strauss tells that he watched this movie again and again to adopt the body language of pure alpha of the actor. Btw, I talk about it in my ebook “How to sublimate your body language” (like Tom Cruise).

In the literature of the seduction, another reference to Top Gun inspired me. It is about what wrote David de Angelo in The attraction is not a choice :

We don’t realize how much we want the things we have… until we lose them, that is. How about making someone want something new, by giving it to them and then taking it away?

Sometimes a woman will be open and warm and other times, she’ll be closed and cold. This can be because of all kinds of different factors… how you’re acting, how she’s feeling, the setting you’re in, what’s on her mind, or what kinds of hormones are running through her body.

I want to talk about a technique that I’ve found works in almost ALL of these situations. A natural extension of my ideas about teasing and playing hard to get is what I call, “TAKING TWO STEPS FORWARD AND ONE STEP BACK.”

Now, when most people hear this phrase, they think of problems arising that cause a loss of ground that has to be reclaimed before moving on, or a setback that has to be overcome before proceeding further. What I’m talking about is DELIBERATELY stopping when things are WORKING in order to ACCELERATE the process.

What? Did I just say to stop something that’s working in order to be successful? I sure did. And if you pay attention to what I’m about to share with you, you’ll learn one of the most profound and important lessons about how to be more successful with women and dating.

Here it is in a nutshell:

If you’re doing something that you can tell she likes, stop doing it, then wait a while and start doing it again. This on/off/on/off sequence is ULTRA powerful in creating a magnetic ATTRACTION inside of her.

I personally believe that two factors that AMPLIFY a woman’s ATTRACTING to a man are the concepts of TENSION and ANTICIPATION.

Tension is that feeling in your chest that you get when you know something exciting could happen at any minute.

If you can learn how to take control of these feelings and help her experience them as a result of being around you, then you will DRAMATICALLY improve your success with women. If you want to see a great example of this principle at work, go rent the movie TOP GUN.

Watch how Tom Cruise handles the situations with Kelly McGillis… they’re PERFECT examples of how to do what I’m teaching.

Here are two of my favorites:

1) They’ve just finished eating dinner, and they’re talking. She looks at him and says, “This is going to be complicated”, implying that she’s falling for him. What would most guys do if they were getting a green light like this one? They’d probably make a pass at her and kiss her.

Not Tom. He looks at her, then gets up and says, “I’m going to take a shower.” At first, it would seem that he was going to walk into HER shower and take it, but no… he walks out, gets on his motorcycle and rides off.

2) In the elevator scene… Tom stops the elevator and leans in close to her. You can see that she’s feeling shy and anxious… but does he kiss her? No. He leans back after that moment, makes a cute remark and leaves. What’s going on here? The first time I saw these scenes many years ago, I just thought that he was too shy to make a move.

Now I understand what’s going on here. He is VERY DELIBERATELY creating TENSION and ANTICIPATION inside of her. He is, in effect, saying to her, “I know that I could make a move right now, but I CHOOSE not. I’m going to keep you guessing… make no mistake about it, I’M IN CONTROL OF MYSELF here.” By the way, when you watch these scenes, watch his body language and facial expressions. Notice that he doesn’t smile too much, and he plays the part perfectly. Watch and learn.

So how can you use this if you don’t happen to be one of the top movie stars of all time and have a $40 million aircraft to enhance your image? Simple. Just notice when she likes something that you’re doing, and then stop. Lean back. Tease a little bit.

If you’ve started holding her hand and you can tell that she likes it, STOP. Take your hand away for a few minutes, then talk about something else. Just when she doesn’t know if you’re going to do it again, take her hand again.

If you’ve started kissing, STOP. Lean back. Look at her with a “I know you want to kiss me” look and give her a slight, sly smile. If you learn how to take two steps forward and one step back, it will ACCELERATE your success with women.

Last but not least, I advise you to watch this movie for the cocky&funny lines that Tom Cruise practises in this movie.

A lot of people criticizes Tom Cruise saying that he is short and has a big nose, but we have to face the facts: He succeed in life and he slept with magnificent women (Penelope Cruz, Nicole Kidman, Katie Holmes…) Moreover, in the movie, he gang-bangs on his own a girl older than him and far from being ugly (his instructor).

So, jealousy is useless, let’s be humble and let’s learn what we can learn from him.

previous5 reasons why you should watch Masters of Sex
nextSeduction and sport-that-makes-you-deaf, compatible?