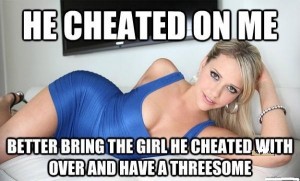 Hi friends, it’s past noon and I hardly open an eye. Needs to say that I spent a so exciting night that I had trouble sleeping. I type this FR to try to clean up my thoughts.

Yesterday, we went out with Padawan, in a small bar of the city center (the one where many foreigners go and where it smells the rotten egg inside). Guess who we ran into, damn?! You’ll never guess : into the girl whom my very dear Padawan undressed at the beginning of the month (the one who watches manga porns with her friends). A good leg and a golden girl, according to him. I wanted to verify.

She was with her friends. A set of 4 girls who were drinking some wine and dancing. We walked towards her ignoring royally the others, Padawan introduced me, she was embarrassed, I a little forced her all the same to give a kiss to me… we’re not animals ! Then, I let them talk together, so I wasn’t the big weirdo. I settled a little farther, casually sat on the file of a chair. Honestly, I a little felt nervous like an artist before coming on stage. Then I preferred to shut up and watch my body language rather than to take the risk of saying a bullshit. I looked at the guys who “danced” and I was scandalized that we call that “having fun”. Good thing the ridiculous does not kill. The lack of alphaness neither. I didn’t feel this evening, for God’s sake, I didn’t feel it .

After a while, the friend of Padawan came talking of this and that with me whereas he warmed her very slightly from behind. Submission by the eyes : up to here everything goes well. Absolutely not perturbed by the merry-go-round of my wingman, but seeing clearly through his game, I told casually the girl the night when we warmed The Girl Of The Body Painting together in my bedroom. I described how much it had driven her crazy. I saw her attractive naughty eyes beginning to shine.

But I didn’t feel it all the same, this dead duck. Especially that there was her whores of friends, fucking cockblocks, who were a pain in the neck to me. Then I was so to speak a little bit vile with them. Needs to say that I had poked at least 2/4 on FB and that they had written me the usual shit like “who r u?”, “why do u poke me” or “what is a poke” and that I was quite a troll in my answers… then here we are, I paid it because they made my reputation with Padawan’s FF. “He is a jerk, a fucking asshole, etc. But go on the other one, he is cute.” We cannot say that I did not deserve it but well… “Who sows the wind reaps the cyprine” says the proverb, no ? Ah no, it doesn’t say that.

Don’t worry, I am used to get it in the neck with the fair sex. It is the principle of The Game. Women make us suffer. The seducers are send to hell. They get it in the neck. It is sure that it is not the poor guy who keeps the same idiot all his life who can understand that. I am Chuck and Padawan is Nate. He is the Apollo with well drawn abs and I am the guy that we fuck because the indecency attracts and fascinates. One of her miserable friends came speaking to me “I have to occupy you so that your buddy can pick up my buddy. [She had probably not understood that they already slept together, ahlala women and their secrets]
– really ? it’s cool, go on occupies me, and do not hesitate to call a friend to help you darling. I am very greedy.
– well no but I have boyfrienddddddddddd, dude.
– it’s cool anyway my buddy won’t pick up your friend in this bar, we are gonna make a 3some.
– sure…” I love saying truths like that, on the tone of provocation: they never believe me… and yet !

I did recover, stage fright left me, the modjo of my three fucks in two days took over the top (I felt invincible and cocky again) and I said to the two lovebirds, “do you want to go in a place where your friends are not? it would be a shame to shock them anyway.
– OK we can go outside if you want it’s hot here. I finish my drink, you don’t drink anything you ?
– I don’t know, do you want to give me some of yours ?(compliance test)
– yes, take some.” Finally, there was maybe a hope to spend a great night. Even a downright awesome night.

We went out and we walked to my house. “Where are we going ?
– Let’s just have a walk, guided by the night.” Snipe’s FR about threesomes&foursomes suddenly came back to my mind. We do not put into words the thing, we do not say “let’s go to my place”, we say “let’s go” and… we arrive to my place. Mouahahah. In brief, we took the elevator, we sit on my bed and nobody breaks the magic and we stayed in the darkness “I a little have pain in the eyes this is why I don’t turn on the light” (one more awesome Snipe’s trick).

Me, I sat on the bed next to her, and Padawan was standing in front of us. He caught a book and started reading it, while undressing on his own, until he finished topless with open pants. Like if it was totally normal. I did not try to take advantage of it to fiddle with her nor anything, that would have looked try too hard, then I told her “are you cold ?
– no why ?
– well I don’t know, you still have your jacket” and she took it off. Then I said to Padawan “come on the bed, I am going to put candles to enlighten you”. I fetched candles in the lounge but on my way “Padawan, did you see my sweater ? I’ve just lost it.” ; “Pada, my belt, I don’t know where I put it, and my pants opened alone”. We put three perfumed candles and it is me who continued the reading while she jumped on Padawan and while they started kissing. She was really put under stress, I guess. Two topless men, open pants, while she was still dressed. Padawan undressed her, she was passive, whereas I was concentrated on my reading. When she was naked, she said “are you sure you want to continue the reading ?
– do you want me to stop ?
– as you want… euh… I don’t know what to do or say in this situation I don’t know how to handle it.” I went towards her, we kissed each other, I touched her attractive firm body and Padawan started fingering her. She shook me meanwhile, and I can tell you that I was very hard. Her breasts and buttocks, are severe arguments that automatically make young heterosexual men like me react. We a little presented her with a fait accompli to fuck her together, but I always preferred asking for forgiveness rather than for permission.

Then, we discussed until 4 or 5 am by eating almonds and Goji berries like bohoes. I discovered a really simple, nice girl and everything, cool. I was not against a second round but we didn’t do it. In any case, the queen of the day today, it is her. She had two guys for her (and not the worst of the world). And she had moved forward in the head: overcoming the social pressure like that and going out of her comfort zone… bravo. It is not the kind of thing that normally happens, normally you go out in a bar looking for a “2some”, in the best case. It can happen only if you fell on guys like us. Anyway, she will have a great souvenir for later. But I don’t think she will tell it to her current friends. Moreover she told me that the tall brunette who said “I have a boyfrienddddddddddddd, dude” cheats on him non-stop. Bitch. We are not fags, and she is not a whore (if you still have this fucking mindset, do not hesitate to read The (inconvenient) truth about gender relations). When they left, she had difficulty in walking but her eyes were full of stars. Lucky girl !

Padawan shared his best sexfriend of the moment with me for my anniversary! I am moved, what a present, what a birthday doggy style ! I need to find a way to thank him, because I am a polished boy all the same. This is a real bro who understood the spirit of Game : take and give and carpe diem. Needs to have reached a fucking level in the head to be able to do that. To be capable of realizing this kind of thing. Maybe we are crazy. Besides being proud of him, I said to myself that this kind of moments, it creates bounds all the same. Finally here we are, I was lengthened on my bed and other euphoric thoughts crossed me. What did I do to deserve that ? That very morning by going out for shopping, very far from suspecting what was going to take place, a veiled yucky girl made her credit card fall in the street and like a gentleman I ran after her on 200 meters to give it back to her. The karma maybe ? Can be a factor, no ?

This morning, it is the soft ringing of the bell of my telephone that woke me up. A hot girl I approached on Adopt (I’ve already talked about her in a previous post) sent me an attractive photo of her buttocks without I asked her for anything… like if she had felt that it was again necessary for her to draw my attention again. They are very good these women all the same. Sixth sense, feminine intuition, all this shit… It is thus my 4th FC in two days, success calls success. For more advice, read Secrets for seducing on the Internet.

May the God of the Game be with open-minded women !