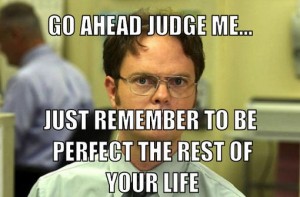 Monday. On Monday, I had my last oral for my diploma. During my presentation, the jury went through my report, then they improvised shitty questions on the 3-4 first pages (the document has more than 100 pages) before concluding by “that looks very complex, this work, we really have a doubt, we do not know if it is really you who did it”. Here is how an incompetent jury which did not read the report (while it is its JOB) for which you worked hard during several months is going to make you fail. And it is true within one hour, because they are idiots. How to continue to have some respect for the Department of Education in France after that ? Needs to specify here that it was a study on the new tax system in the metropolis Aix-Marseille which concludes that it is necessary to reorganize the region to make it more competitive, and that the MEDEF contacted me via my internship supervisor to use this document in the discussions at the senate. They even made me meet some experts to polish it up… Then, yeah, I am more or less sure that it deserved 15/20. As a result, I didn’t appreciate being dealt as a child who would have copied his work from Wikipedia and to whom we speak as to a moron. Either it was a political operation led by anti-metropolises (the vice-chancellorship and the city hall of Aix), or the examiners were simply released by the subject, or I am paranoid and completely stupid but I do not realize it. In three cases, I will be fucked, I can feel it. In brief, with the recent aggression, that makes a little bit too much and my morale comes down in my socks.

Tuesday. On Tuesday, I was so much irritated by Monday that I didn’t move from my parents. I just started a new ebook project about the body language.

Wednesday. On Wednesday, I finally left the family cocoon in which I camped during more than a month for my revisions. Come back in Aix : DATE planned at home between 6 and 7pm with a girl from Adopte who I allegedly had to screw. As a result: at 8 pm, still nobody there. At the time of today, she sent me neither message of excuse nor anything while she is connected on FB… I deduct that it is the law of the series. At the moment, I really have no luck, I only fall on negative people. Well, when the guy waits for the girl at his home and when he can attend to his activities, I don’t see the interest to stand him up to piss him off… or then she simply chicken out at the idea of being taken wildly ?! This kind of girl is totally useless, I have already granted her more time than she deserves, let’s not speak about it anymore. Well, I was very tired and all this lousy stories screwed my modjo a little. Then I went in my bed and slept during 14 hours.

Thursday. On Thursday, big day. First of all, Hafid turned unexpectedly up at home. We went to the faculty of literature: I approached 7-8 girls by telling them, grosso-modo, that they interested me and I suggested them going in a date. Because I did not fall on a single willing girl, I answered them all “you do not know what you miss”. It was not a question of ego, just that I was irritated by the succession of the failures. Why have I to go to a great deal of trouble “to deserve the right” to give some pleasure to a girl (especially that sometimes, needs to speak sincerely, I sell myself off) ?! Fuck this fucking logic.

Padawan then convinced me to go to the taekwondo at about 8 pm with him. His club is tremendously cool, people are awesome (not one single big idiot), the sport is nice and really made me force… I think that I am going to join because I really need to let off steam at the moment. On the other hand, later, we went to the sauna and the little of energy which I had fell again.

Hard luck, I had to go out with Hafid. Yet, for me, making a false plan is unthinkable, even if I am done… so we went out. And there, it was the drama. For the first time since almost 2 months, I confronted with the poverty of the hunting ground in Aix. Almost nobody in streets, bars were full with 90 % of alcoholic guys who made circles around the rare (fat) girls to prevent the others from speaking to them (when I think of these guys, I always have in mind the image of monkeys which defend their female by taping on the breast). I have the impression that the level of the field falls in a continuous way for one year (or then it is me who is not any more in sync with the alcoholics). Really a disaster.

At about 2 am, we have tried to pick up an English girl, Hafid took her FB. Then we returned and, on the road, I sent a text to Marie (my open relation of last winter). I told her something like “are you in town? I go back home, if you want, come with me otherwise I don’t know what better you are going to do tonight”. She came at about 2:45 am. We made love directly, like before. The link between us always exists, it made me feel something. On the other hand, she enlarged, then she only wanted to fuck chastely in the black. But it is MY Marie to tell the truth, I don’t care about all that (3 months I wanted to screw her again! Especially that she did not stop texting me “OK but we shall go have a drink eh, later we shall see, I don’t come so easily at your place” (incomprehensible) and there with just a little bit of alcohol in the blood she finally assumes to do what she in fact wanted to do too!) I was not taking doggy style a model, but a girl with whom there was a strong sexual complicity. On the other hand, I had a little idealized her in time, I realize it. But the fact that this fucking connection still exists, it is fascinating !

Friday. On Friday, DATE at noon with Virginie. We ate, we made love on the couch. My old neighbor came to tap in my door while I was ejaculating. I don’t know what she wanted, I didn’t open. I cursed her instead. Then, we watched The King Lion 3… then, I have banged her again and I almost fell asleep so much I felt good terms with this darling in my arms. Quite slender (99 pound for 5ft4), fine-looking with breasts and very firm buttocks, green eyes, good face and everything. Paradise.

The conclusion is that Aix became a shitty field. It is small, thus very limited for the SPU (you always meet the same people) and the clubs especially where the entry is less than 10€ are really bad. Less than 10 girls for more than 90 guys in the clubs. I just exaggerate a little. Then yeah, there are girls in the city, but they do not go out any more in the night. I have the impression that what also plays it is that our generation knew neither the hunger, nor the war nor anything. Most of people did not thus understand that it is necessary to enjoy life, to do not waste time for things without interest because it can stop at any time… and it is true simply because most were never confronted with death. Well, there I have my wintry modjo reduction, like I had before summer. I do not really want any more, I don’t feel the NEED nor the ENVY. In a week I will feel better, I hope, but while waiting… I am going to wait that the storm passes.

I hope that this text will have purged me and will have raised the bad eye which I had on me… While waiting to make a fresh start, may the God of the Game be with us all, we need it !

previousLife lesson : when I have been attacked by four fucking shitty assholes
nextFabricio Juliano, the fake Spanish student from Mexico