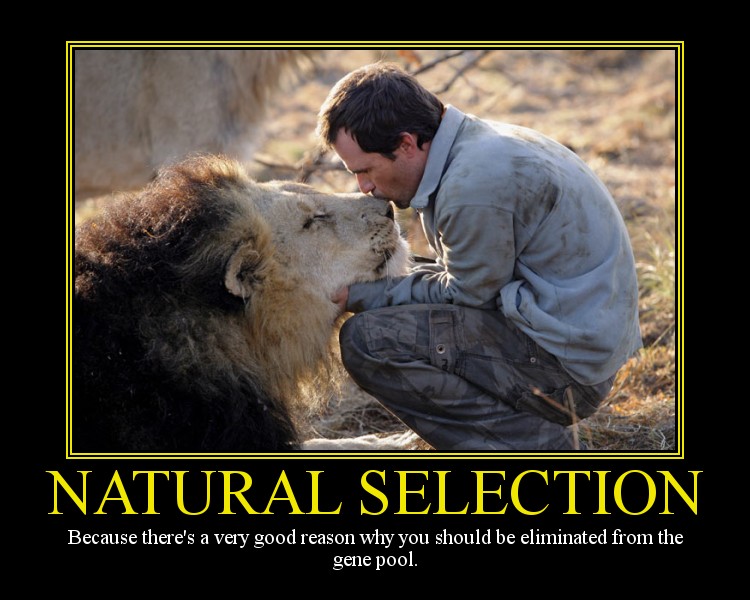 Sorry (even if it’s not my fault), but over the centuries, the selection based itself on efficiency, not morality nor happiness. Do not throw me tomatoes, please, I am only the messenger!

Natural selection is defined as the fact that a number of people just pass on their genes. Indeed, it is not enough to live to breed, you must above all be selected by a partner and breed. That is what is specifically called sexual selection, component of natural selection.

Well-known but not really understood, the theory of natural selection is however not very complicated: if there is a variation on genetically transmitted character, then the characters that have facilitated this transmission of genes are more likely to be present in the next generation than those having impaired it. It is therefore not the best genes that will be passed : it’s those that will be passed which will have been the best. It is very difficult for us to predict what will be the best genes in the next generation. The son of Brad Pitt and Angelina Jolie will maybe look ugly. There is little chance but how to know? There is always a small element of chance that comes into play.

But let’s go back to our sheep doggy styles. The idea behind sexual selection is that it is not enough, in a gendered species to be viable and healthy to transmit your genes: you must also find a fertile partner of the other sex with whom uniting to transmit. In other words, if there are two sexes and at least one sex partner can choose with whom he or she will pass on his or her genes, then there will be sexual competition between candidates.

The degree of sexual competition varies according to gender animal species. Most often, it is the male who will fight (usually physically but not always) to gain access to females. In fact, the distribution of sexual competition between the sexes depends on an essential criterion: the cost of having offspring for one of the sex. For cost, one must understand “anything that has a negative impact on the next or previous offspring” : the time required (e.g. pregnancy), the impact on health, the time required for weaning and raising children , etc.

In humans, it appears that the fathers were very important for the survival of children. In some Amazonian tribes, paternal orphans are killed: no one wants to take them over. In the challenging environment that prevailed for most of human history, a father was very important. Therefore, in humans, it’s not just men who are in sexual competition, women too. Once they found a man, women want to keep him (we will also study how people manage competition between individuals of the same sex).

Of course, parental investment is not the same for each sex: women experiencing pregnancy for nine months… during this time the man can flutter as he wants: his investment in it is still much lower and therefore the selection criteria of each gender are not the same.

Much of the choice of human partners will be influenced by the Reproductive criteria, unlike the woman who will be largely influenced by the criteria of Survival. Those who know a little bit the Mystery seduction method already know what I mean. Basically, “survival” corresponds in theory to manhood, to be a leader, to have ambition, etc. While “reproduction” it’s mostly about physical appearance.

The female strategy of looking for a dominant male, well known in the world of the game, is for the female to do not look for a caring father… but instead for good genes that produce visible effects, such as muscle or marks of health, reflecting longevity and maximum fertility. The females in this logic are seeking to optimize the transmission of their genes by mating with a partner with such characteristics in order to give birth to a beautiful male who also will possess those characteristics which will make many females of future the generations consider him.

However, a male too alpha would scare women who are afraid of not being able to keep him because he would have many offers to leave with another woman. This is the same logic that make the too beautiful women intimidate men, who often do not even dare to approach them.

There are not so long, every society made arrangements in one way or another, so that “everyone has his or her each one” and that no one or as few people as possible are frustrated of sex and offspring. Societies of the “arranged marriage” also still exist in some cultures.

But then, today, within us, have only the beautiful girls and the wealthy guys the right to love (or at least to reproduction)? Does evolutionary psychology condemn men and women who are just average, not too beautiful nor too rich? No, in the society we live in, to help us get our game well, charm, and ambition, are powerful weapons to cultivate. And good news: they do not fade, unlike beauty, and are not as ephemeral as can be the media success, for example.

I will reveal the keys so each one of my readers can succeed at the game of life!

previousWe are preprogrammed
nextCan we speak of dominant male for humans?