Not drunk enough or you don’t find me cute enough? 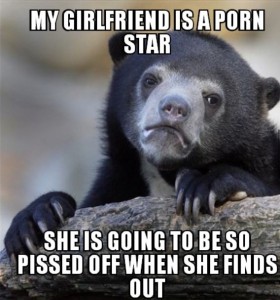 Used to nights in Aix and to the biatchs girls who go there, I expected being rejected by a lot of women with my technique (crash&burn), but finally not… What develops my conception of this technique and urges me to deliver you here the last updates of my reflection.

4/ I approached a not too bad girl from the distance, but by approaching, she was chubby. “Your technique it is some shit
– You cannot talk to me like that
– why not
– This technique showed its ability, silly bitch
– prove it, approach this girl”
Ratio : 2/4

6/ Well, I saw a brunette well molded in her small black dress. Green eyes, cute. I went there on my own initiative “would you like to kiss me?
– Not at the moment
– Not drunk enough or you don’t find me cute enough?
– Both…” I spoke a little with her and she asked me “I am the number how much tonight?
– 134 and me what is my number?”, (there I confused a little bit so to speak the number of girls with whom I slept all in all and the number of girls I kissed this evening but it was pure provocation) she took me by the hand and wanted to dance… I continued to provoke “you know that I will not kiss you
– Me neither
– you are the one who’s gonna fail!
– no, no way”
Fearless & relentless escalation, seduction game, she did fail.
Ratio : 3/6

Well, I then spent 2 or 3 hours with this girl. We got along well and at a given moment she shook me in my jeans (but attention, not till the end then that does not count). I understood nothing, she really took the initiative… Otherwise, at another given moment, one of her buddies was in a kind of ethylic coma: I brought him a drink.

7/ I had a walk towards the dance floor when a girl approached me “have you got fags?” she caressed my trunk at the same time then I answered an irrelevant thing “are you hetero?
– oh yeah
– are you a good kisser?
– yes” and she put her tongue in my mouth then “have you got fags?
– No I don’t smoke
– no prob, good night, it was cool all the same…” She was very fresh moreover, a brunette with blue eyes, fine-looking. The life sometimes reserve pleasant surprises!!!
Ratio : 4/7

I think that the girls are more able there to leave free court with their desires instead of settling one thousand questions. The seduction after all it is not to make somebody do what she does not want to do, but to succeed in making the person do what she secretly wants to do. As a result, the girls test us to see if we understand that. I had looks from top to bottom (NB: always maintain the eye contact during the scan of your person), I had tests of perseverance, girls who asked for arguments as if I had to justify the fact that they were attracted to me but they were only invitations to continue to be able to do want they want freely. I think especially to the one who began by telling me that she didn’t like me : it was doubtless to test my confidence.

Had guys there who stripped to the waist (topless) and were bragging. Hours spent in musculation and so many carcinogenic products absorbed, needs to make it profitable! Well, no, bros, “a rich does not need to say that he is rich”. So, by making it, you sub-inform that you have no other argument than your body, that you try to compensate, that can work, but only with poor stupid girls…

As for the one who touched my cock: did she want to indulge herself (after all when I touched her breasts and buttocks, it was not to see if they were big, it was to feel a pleasant sensation) or then she wanted to see if it was big? In any case, I believed that she was going to suck me on the spot, that would have totally turned me on. Well, I have facebookclosed her all the same.

At a given moment, she said ” oh noooo I made out with a no-medicine” and her friend came to laugh at her then I returned “stop making fun of her, you too I kissed you “, she was number 2… So funny!

Anyway, if I had been able to approach more girls, with such a ratio of success, I think that I would have been able to beat my record. For the next parties of medicine : I shall be present, ready to beat the record. I am ready for the music festival also and I think that I am going to practice my hard-line pushy attitude but that when a girl will tell me “no” in a not convincing way, I shall insist a little all the same. There are “open no” and “definitive no” I think. Will need to differentiate them to don’t waste too much time.

During the music festival: I want to approach 200 girls no matter the ratio of success, I don’t care. We will see what happens! Needs to experiment in the life!