One simple advice to improve your repartee 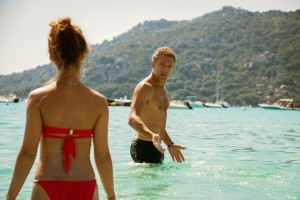 One of the most common mistakes in seduction, it is to think that you have to say at all costs interesting things, to prove your value, even brag… Certain guys so become more talkative than a teenager in back of the classroom because of the stress engendered by the date. Golden rule: prefer showing her an a little bit low energy level that a too high one.

I am going to reveal you a secret: the human beings in general (and the girls in particular) like talking about themselves. They are only interested in what concerns them (directly or indirectly). To seduce more girls, I thus invite you to work on your ability of listening to make them talk about what they are interested in.

The ability to listen, it is not only “to make your interlocutor talk randomly”. You have to learn how to notice the verbal and nonverbal signals (implicit or explicit) that will allow you to direct the conversation in an adequate way (on convenient subjects) to get your own way.

Live in the moment

For a good ability to listen, be totally focus on what you are doing. Dedicate your attention on your date. But keep a casual face! You will have to ally logic / capacity of analysis and creativity / spontaneity.

Forget the “too much prepared” techniques of seduction that look like informatic programming language of geek. You can study various methods to get a plan (and thus all the time check more or less where you are situated in your way towards her bed) but step back on game plans because every interaction is unique. To react in an optimal way, don’t be extremely focused on your game. You will so maybe be focused between her legs one night or the other one.

The listening of the explicit, it is to listen to “the words” of your interlocutor. What she says, to adapt yourself to her style of language. You can synchronize with her on this plan while keeping your own personality. Do not hesitate to use her first name when you talk to her: people like that you remember their first name (but do not expect them to do the same thing for you). In an ideal frame, you can chat and hear each other suitably. That it is a good thing: with any luck, you will turn your tongue in the same direction when you will kiss.

The listening of the implicit, it is to listen to “the emotional state” of your interlocutor. All the words, according to how they are said, can mean something or the opposite. Try to put her in emotional conditions convenient to seduction by directing her on subjects that make her have fun. When you try to pick up a girl, even if she is shy or does not know what to say (no imagination, no skill of communication) you can notice that her voice itself gives you an idea of her level of interest (if she is very enthusiastic, it is an indicator of interest, even if she does not really know what to say). Learn how to read between the lines! For some, it is innate for others we have to learn…

Thus you will increase your level of empathy. That is to say : you will learn how to perceive better and to understand what feels the person in front of you. The empathy is a notion indicating the “understanding” of the feelings of another individual, even, in a more general sense, his/her non-emotional states, like the faiths or beliefs (it is then more precisely about cognitive empathy). In ordinary language, this phenomenon is often designed by the expression “being in the shoes of the other one”.

This understanding occurs by a not-focus of the person on himself and can lead to actions related to the survival of the subject aimed by the empathy, independently, and sometimes even to the detriment of the interests of the subject feeling empathy. In the study of the interpersonal relations, the empathy is thus different from notions of sympathy, condolence, altruism or emotional contagion that can ensue from it.

By opposition, there is a passive listening. It is what we all do at various moments of the day. Do you remember the last ad you saw or heard? The listening is distracted, without particular attention.

To do things properly, for an optimal listening, it would also be necessary to avoid throwing our own filter on our perception of the conversation. Everyone acts in one’s own interest as they say and thus we all interact with the world according to our world map, what can bias slightly the interactions. To do things properly, would need to succeed in releasing ourselves from all this but well… It is maybe not worth the effort to make some zeal either ! ;)

Listening actively is an art that requires a strong concentration, and a focus on the other one.

What I do not like in the community of the seduction (especially in English), it is the ready-to-use routines or the “techniques” that leave no room for creativity. As soon as what you say does not come from you and does not correspond to your personality (for example: magic words that other people advised you to pronounce to seduce) it is some shit. Do not become a robot. Be an artist, a real one. Get off the beaten track! Have fun while you try to pick up!!! Do not have the impression to work or to walk on eggshells when you interact with chicks, seriously, it would be a pain in the ass (for you and for her)!

Do not either always try to anticipate! Neither her reactions nor anything… nor thinking for her. Provoke / try your luck and see what happens. The important, it is to have no regrets when you go to bed even if you go there alone! You will sometimes be surprised by how can a party turn when we just light the fuse of the bomb (this is a metaphor)! Some people think that it is the people who are not confident in fact who try to always control everything… so you know what you have to do now because sexy women do not want to see this part of you (ie this lacks confidence – but I’m not saying that you cannot have some weaknesses it’s not at all the same thing). Reading my blog, it’s good, but letting it go on the field is awesome! However, for that purpose you have to overcome all these excuses your anxiety urges you to imagine !!! Do not deny! Even me, I still find excuses sometimes… except that I am conscious of it and so I act accordingly.

Know that quite a lot of girls want to get acquainted with you. But I’m talking about the “real you”, not the you submitted to the social pressure nor the you submitted to the mechanical game that makes you say things which do not correspond to you (just because you’ve read them in the FR of a mythomaniac asshole). Do not speak too fast either, it is stressful… finally as for myself it pisses me off. I thus imagine that I am not the only one in this case.

Cooperation rather than opposition

I’m not trying to annoy you with theory but try to always adopt a guy a cooperative mode of conversation rather than a defensive mode. So, your target will maybe do the same… In any case, it is the purpose and that increases your chances of success! Cooperate in the conversation to better cooperate in the bed!

If you have already practiced theatrical improvisation with other people, you know that you should absolutely not block the ideas of your partner but rather instead develop them. And of course, do not block the conversations by answering “in one word”. Seriously, when a girl does that, I answers her “do you know that it is with this kind of answers that you could block the conversation.
– of course no (that means go for it make all the efforts for me, I am a princess)
– OF COURSE YES, so bye bye.” I hate bootlicking the girls, I prefer licking them somewhere else. Then for example on Tinder when I write 10 lines and they answer with 3 words I train them.

I invite you to go further than what she says and to go into her delirium rather than to block her. I’m not saying that you have to agree with all her ideas but avoid the following words “no”, “but”, etc. (everything that can block a conversation). Prefer the mindset “yes and …” This simple thing will make you conversation richer and funkier!

It is also a good technique to manage the shit-tests (these questions supposed to destabilize you to test your confidence) : “Do you say this kind of thing to every girl ?
– Yes to all the girls even my mum and she likes it.”

“I am not a sex thing.
– Neither do I. But why do you speak to me about that? That makes you look a little insecure all the same.” (It also works when you synchronize on negation)

It is all the same much funnier to show them how much their questions are absurd and to avoid getting stuck in the embarrassment of shitty justifications to try to prove them your value like a knight who would kill a dragon to be entitled to a kiss on the cheek on behalf of a princess. And then it is better than answering “shut up biatch” as I’m used to do. Self control requiered!!!

Any woman is a discovery and can surprise you (for the better or for the worse). I always have hope to meet a girl who is going to make me have fun! Even if it is my tenth silly bitch of the day… I continue for the eleventh who will (maybe) be an adorable small cocksucker, funny, sexy, open-minded AND WHO KNOWS HOW TO CHOOSE BEAUTIFUL UNDERWEAR. It’s important all the same. That’s it the point of the game according to me and this is the way I advise you to live it!!! To thank her for being so cool and attractive, I shall lick her during hmmm… 20 minutes ! ;)

See you soon on the field !

For more advice to don’t let women work you up, I suggest you to read this ebook.

previousThe worst idea I’ve ever had
nextMy mystic side