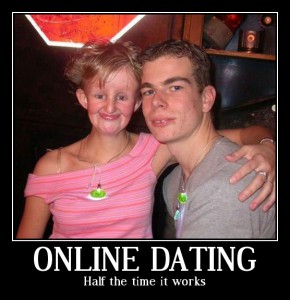 Users of dating sites expose themselves to a series of swindles that are moreover the object of petitions.

Lies about the profiles

Works were led on the truthfulness of the profiles on the dating sites. These studies found for example differences according to the genre, men lying more on their size and women on their weight.

A very wide-spread problem as regards the authenticity of the registered users is the multiple cases of Romance Scam : a shape of swindle in which groups of Africans are been thought of as businessmen and send beautiful promises of love to mature women on dating sites. They then ask them to send some money for a purely invented emergency. According to the official statement of the damages that the FBI published in 2011, the declarations of the American citizens amounted to more than 50 million dollars / year. On an international scale, the damage is every year estimated to more than 100 million euros.

Your interlocutor appears as a person being interested in you, gains your trust. By unconsciousness, you activate your webcam and are involved in a more intimate conversation. The trap closes: the swindler took advantage of it to record you and then has images susceptible to strike a blow at your private life. The blackmail begins : they threaten you to upload the video online if you do not pay an important sum of money.

Some dating sites rest at least partially on a quite particular economic model: They hire “hostesses” who, by the creation of fake profiles, are in charge of arousing your interest enough to make you subscribe and so that it is extended, or still that numerous calls to premium-rate numbers (or clicks towards viruses) are made. These swindles are denounced by many victims on forums.

Deceitful communication: lie on the number of subscribers

A lot of “members” are often old inactive profiles, to whom the site took care of not asking for the deregistration. The number of subscribers claimed by those sites is moreover betrayed by the number of visitors underlined by the independent agency that measure audiences : Alexa Internet.

Lie on the gender parity

Although most of dating sites claim they have as many female members as male members, but we observe that there is sometimes in fact 2/3 x more men than women. (1 woman <=> 2/3 men)

Some dating sites do not respect their legal obligations i.e. supplying information such as the name of the company (with the SIRET in France, SNN in the United States, NINO in the United Kingdom etc.), the mail address as well as the phone number or the e-mail.

General terms of use are not often transposed into the user’s legislation.

(It is besides recommended to go only on famous sites to avoid credit card frauds realized by phishing.)

A with difficulty applicable right to withdraw

The French law allows, regarding remote sale, to withdraw within seven days that follow the subscription. It is submitted to the non-use of the service, a condition difficult even impossible to satisfy for an Internet user who is redirected since his registration on the profiles of the other members.

Termination and tacit renewal of the subscription

The code of the consumption plans the tacit renewal of the subscription when it comes to an end. It thus belongs to the consumer to make expressly the request of termination and, besides, they have to do it two to seven days in advance according to general terms of use. The dating sites do not often warn their customers of these modalities of termination. According to 60 Millions de consommateurs (French magazine), it is necessary to deactivate the automatic renewal in the space attributed to the user account. Certain sites based abroad, like eDarling or Be2, were the object of complaints (=> European Center of consumers).

Your manhandled personal data: risk of permeability between dating sites and social networks

The dating sites, just like social networks such as Facebook, Twitter, Google + or LinkedIn, want to become integrated and to stand out on the Web. To do it, they develop the interoperability to create footbridges between themselves and other sites having a customer database adapted to their business development. A dating site like Badoo or Zoosk is then going to be a member of numerous requests that an Internet user can click inadvertently when he is connected on his Facebook account. This is the way a lot of people found themselves despite their willingness registered and referenced on dating sites. It was able to damage the e-reputation of some of them, like this priest who had to give up his parish. The deregistration is not easy, and even later, you’re often still referenced there. Several complaints against Badoo were lodged with the CNIL.

Canadians who had joined on love2meet.com found themselves registered on other dating sites belonging to the same company “Global Personals”. This one is not moreover necessarily a true owner of sites, but simply sells its services.

In 2013, the Australian editor of dating sites Cupid Media has let escape the personal data of its 42 million users.

Extract from “Secrets for seducing on the Internet“