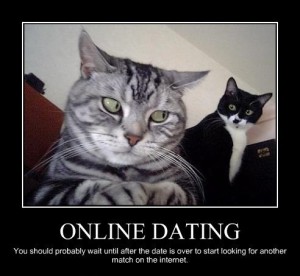 The stereotype of online pick up

Many people have unfavorable bias against online pick up. Many women (men a little bit less) have difficulty in assuming and in saying to their friend that they registered on a dating site or that the charming guy they have met… they in fact met him on the Internet!

The reason is simple: most of people (and especially women) do not want to have the impression that they need Internet to get dates. The world changes very fast but people do not follow at the same speed. It is not something new : at one time, certain people were burned because they had dared to claim that the Earth is a sphere. But if you are an intelligent opportunist of today, then not only you do not risk to finish on the stake… but in addition you have already understood that you have much to gain in learning how to use Internet in your advantage (you can make money, meet women…)

I’m not gonna lie, you will also fall on girls a little disturbed if you pick up very often on the Internet. It’s statistics. Women are sometimes afraid of falling on a psychopath who is going to rape them. But I think that if it is all that they are afraid of, they have more chances to find him in their favorite bar. Because the good news it that, on the Internet, you can detect and easily avoid negative people (and moreover, you cannot end up with some drugs in your drink).

Wonder what motivated this person to use a dating site? If she is really hot, for example, why would she pick up on the Internet while she just has to go out in a bar to get picked up ? Every girl can have her own reasons: some live at their parent’s or have a fascinating work and cannot go out anytime, others do not drink alcohol and seeing a lot of drunk people gets on their nerves, others live in Marseille (city with insecurity) and are afraid of being assaulted if they go out… Anyway, try to understand her motivations… they are maybe healthy (or she simply has the right to be a nymphomaniac, don’t judge her).

Do you see everything on the photos? If you can only see her face, wonder if she is not obese or handicapped. Some hide it shamefully… and once they have seen that the guy in front of her is not happy, they say it is a shame that he does not want to go any farther with her because of their overweight or their handicap. But maybe that the guy simply would have loved to do not be caught by surprise !

If she is ugly on certain photos, know that often girls look IRL like on the worst photo you can find on their online profile (on FB, that’s not true). Be alert anyway !

Is she “teasing” you a little bit too much ? Does she emphasizes her butt and her tits on every pictures ? Any excess is not normal. Not necessarily eliminatory, but in case of doubt, it is necessary to dig the question before meeting her.

Does she takes all her photos alone, at her place, in her bathroom? And if yes, why ? I do not want you to become paranoiac, but be wary. Internet is a jungle : what presents many advantages and some inconveniences. In other words, online dating is a game that can be dangerous if we take it lightly. You know, there are also girls who harass guys when they have their address or their phone number : guys are not the only people which can prove to be possessive starved persons. Thus, a minimum of precautions is mother of safety.

The bigger your city, as a general rule, the better your chances to find beautiful interesting women. It’s statistics (the ambient mentality comes into account too).

Finally, good seducers, generally, don’t like online pick up. As a consequence, you will have few competition on these sites if you can achieve a good level. And you will easily take out your pin of the game!

Picking up on the Internet, a good or a bad thing?

Before going in a party to get picked up, women are accustomed to spending 2 hours in the bathroom. All this to finally undergo awkward assaults all night long hoping that a “good guy” finally comes and approaches them.

The thing is that, often, “good guys” do not approach. Exactly, many good guys have for faith that approaching is “disturbing” and do not want to bother girls (many contend that they just go out to dance or to listen to music or to speak with her friends). Rare are the good guys without inhibitions (in a society where the morons of the reality TV are set up as models) or who know the Game (to get ready to overcome their approach anxiety). Then, those who approach are often big badly educated jerks who are sent to hell (or get kissed if the girl is discouraged). By seeing these guys who dare to approach being sent to hell 99 % of time, it gets away any envy to the well raised and a little bit shy guy to be turned into cannon fodder. Exactly, because he, he is endowed with a brain in working order.

What the hell is going on ? A general misunderstanding. Masses of girls who wait that the guys they like come talking to them, thing they could never do themselves because of approach anxiety. They think they are the only sex that can feel it ? Roughly, in a time when we speak about gender equality, the guys still have to do what women do not dare do, otherwise they are not men, I mean “real men”! Can we say that a woman who doesn’t cook has no pussy ? Because, often, I hear girls saying that the guys who do not dare to approach them have no balls. Which just goes to show that in the feminization, they really take only what arranges them…

On the Internet, women feel more at ease (no need to spend 2 hours in the bathroom) and moreover, they are a little more active in their researches (because more comfortable). Women who join dating sites are “applicant” (even if they have difficulty in assuming it, they will have difficulty in claiming that they are just here for the music), they thus already turned a corner in their head. This way, online pick up has the potential to move us (men and women) closer by allowing them to jump the stage of “approaching”… but online dating is unfortunately now in the collective unconscious associated with the clumsy womanizer. Indeed, for some : if you approach you are you a jerk who tries to pick up everything that moves so without interest… but if you don’t approach, you are a guy without balls thus without interest. Kind of traumatizing. In brief, for a lot of people, the field of the possible loving meetings limits itself to the friends of friends and to people who study or work with them : spontaneous and a priori disinterested meetings. It is limited and especially we really have no control on it.

Roughly, I think that by simplifying the equation one can find his/her way. Indeed, online dating allows those who know how to use it to reach directly the stage of the date by jumping this fucking “ice breaking” stage that raises so many problems in our society.

Extract from “Secrets for seducing on the Internet“

previousThe limit of online dating
nextMy purpose : making you save money on the Internet